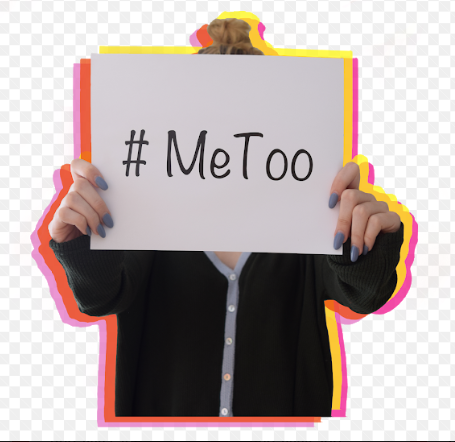 The phrase “Me Too” was coined in 2017. This movement raises awareness about sexual assault and lets survivors know that they are not alone.

From Pain to Power

A Look Into The #MeToo Movement

The official Me Too website defines their movement as a group that “supports survivors of sexual violence and their allies by connecting survivors to resources, offering community organizing resources, pursuing a Me Too policy platform and gathering sexual violence researchers and research.”

Activist Tarana Burke pioneered the movement in 2006, encouraging individuals of color from low-income communities to share their stories. Burke’s motivation for Me Too came from a conversation she had in 1997 with a 13-year-old girl who had been sexually abused. About 10 years later, she created “Just Be Inc.,” an organization to support survivors and aid them in their recovery. From this, Me Too was born, explained The New York Times.

In October 2017, Me Too gained national recognition after numerous women accused former film producer Harvey Weinstein of sexual assault, said Time magazine. The Oscar-winning producer denied allegations from more than 80 women, ranging from harassment to rape. Led by actress Ashley Judd, these allegations encouraged individuals all over the world, who have been victims of sexual violence to speak up.

Alyssa Milano, an actress, tweeted on Oct. 15, 2017, asking everyone who had been sexually harassed or assaulted to respond to her post by saying “me too.” She explained in her tweet that her hope was to give people an idea of the issue’s extensiveness. Milano wanted to reassure those who had experienced this type of trauma that they were not alone.

Milano’s tweet, with more than 90,000 replies, accentuated the hashtag that became widespread due to its prominence in everyday life, explained USA Today. In an Oct. 2018 poll done by the Pew Research Center, 65 percent of U.S. adults on social media reportedly see posts relating to the topic regularly.

According to the Chicago Tribune, 13 days after Judd’s allegations, Olympic gymnast McKayla Maroney was the first of her teammates to make allegations against former team doctor Larry Nassar. As reported by Vox, a news and opinion website, about 300 women and one male athlete have come forward, accusing Nassar of sexually assaulting them under the guise of medical treatment. Nassar was sentenced to up to 60 years in prison for child pornography charges, and up to 175 years for his crimes.

Before the end of 2017, Time says that 142 public figures had been accused of sexual assault. These accusations were the start of what became a worldwide campaign to end sexual violence altogether and hold those who have committed such acts accountable.

The Me Too Movement “expanded to reach a global community of survivors from all walks of life and helped to de-stigmatize the act of surviving by highlighting the breadth and impact of sexual violence worldwide,” explained the movement’s website.

Protests against sexual violence began long before the phrase “Me Too” was officially coined. According to the National Sexual Violence Resource Center, or NSVRC, women in England started “Take Back the Night” marches in the late 1970s. The marches, made up of women wanting to fight back against the violence they had experienced while walking the streets at night, quickly grew to include other countries, such as the United States.

In 1978, San Francisco and New York City hosted the U.S.’s first “Take Back the Night” events. Though it began with a focus on female survivors, “sexual assault awareness activities grew to include the issues of sexual violence against men and men’s roles in ending sexual violence,” says the NSVRC.

Beginning in the early 1980s, the NSVRC writes that October has been dedicated by activists to bring awareness to violence against women, broadening their focus from sexual violence to also include domestic violence. A week in April was also designated “Sexual Assault Awareness Week.” By the late 1990s, this week turned into Sexual Assault Awareness Month, which was first nationally observed in the U.S. in April 2001, according to the NSVRC.

With each new year came a new campaign. Starting in 2005, the NSVRC shifted their focus back to sexual assault, beginning their “Build healthy, respectful relationships” campaign. 2006 focused on encouraging survivors to come forward with their stories. In 2007, the focus was on preventing sexual violence in communities, while 2008 and 2009 focused on workplace violence.

Stuck in the Middle

Many people connected to both the victims and the suspects are impacted by the acts of sexual assault. Sarah Silverman, a stand-up comedian, captured this dilemma when it was announced in 2017 that a close friend of hers, Louis C.K., also a stand-up comedian, had sexually assaulted multiple women. She, too, was a victim of sexual misconduct when she was younger.

Dave Itzkoff, a culture reporter for The New York Times, wrote about Silverman’s monologue during her talk show, “I Love You, America,” where she said, “‘It’s a real mind fuck, you know, because I love Louis. But Louis did these things. Both of those statements are true, so I just keep asking myself, can you love someone who did bad things? Can you still love them?’”

Silverman expressed that she wished that she could “sit this one out.” In her monologue, she also said, “if it’s mentionable, it’s manageable,” emphasizing that this topic could not be ignored.

As reported in The New York Times, Silverman expanded on her reaction: “So I hope it’s okay if I am at once very angry for the women he wronged and the culture that enabled it, and also sad, because he’s my friend.” She went on to comment on what needed to be done: “I believe with all my heart that this moment in time is essential. It’s vital that people are held accountable for their actions, no matter who they are. We need to be better. We will be better.”

English and theater teacher Mr. Christopher Thomas said that “increasing awareness and expanding our understanding” are the most important parts of Me Too and that, from there, everyone needs to evaluate their perspectives to figure out “how we are part of the problem as well as how we can be part of the solution.”

When asked to describe the conversation around sexual violence while he was growing up, Mr. Thomas commented, “Part of Me Too’s point is that it wasn’t talked about.”

He explained that Me Too is meant to help victims of sexual assault understand that they are not alone and to help them use their voices to stand up against injustice. Mr. Thomas said that these things didn’t often occur before the Me Too movement began.

Mr. Thomas emphasized how important he feels it is that people change the way they talk about sexual assault and continue recognizing the movement: “The Me Too movement could just be looked at as a blip or a thing that happened in 2017, but we, however, have the opportunity to move forward from here and learn as a society how to change,” he said. He further highlighted that “with any type of advocacy, it’s important that it doesn’t lose steam, and I would say that would be big on both the national scene as well as personally.”

It is not only up to the victims of sexual violence to take action, explained Mr. Thomas. He voiced, “if you’re not actively saying ‘that’s wrong’ or ‘no, don’t talk about it that way’ or trying to change the conversation and the narrative, then you’re just letting the system continue the way it is. So, I would just say that we all have a role in trying to change our society for good, men and women included.”

How to Help or Get Help

Most people don’t think they’re going to be next, that they, or one of their friends, will become a victim of sexual violence.

When a bystander is scared for someone’s safety, they shouldn’t be afraid to intervene. Intervention should fit into the bystander’s comfort zone, and it should never put their own safety at risk, says The Rape, Abuse, & Incest National Network, or RAINN.

“Bystander intervention,” as defined by RAINN, consists of the “many different ways that [people could] step in or make a difference if…someone [is] at risk [of sexual assault].”

RAINN’s first tip for when someone is at risk is to create a distraction. This could be as simple as diverting the conversation to something that engages everyone in the room. Or try saying something along the lines of “Let’s get pizza, I’m starving,” or “This party is lame. Let’s try somewhere else.” Anything that relieves the potential victim from the situation would be beneficial.

The second thing RAINN advises is to talk to the person who might be in trouble. Asking them questions about who they came with and if they’d like company could make them more comfortable and more likely to trust the intervener.

If a bystander doesn’t feel comfortable approaching the situation alone, RAINN encourages them to ask someone nearby to assist when reaching out to the person at risk. If the bystander doesn’t personally know either individual involved in the situation, RAINN suggests finding someone who does to intervene in their place. This could provide the best outcome; a friend of the person at risk could simply escort them to the bathroom.

For those who have experienced sexual assault, abuse or rape, Planned Parenthood, a nonprofit organization that focuses on family planning and reproductive issues, describes what to do. Their first tip is to get to a safe place as soon as possible. This could mean a highly populated place, but it’s really anywhere that someone is no longer alone with the abuser.

Their second tip is to not change anything on the victim’s body body. If a survivor decides to talk to authorities, the evidence on their body could help them find the perpetrator, says Planned Parenthood.

Seeking medical care is also important after sexual assault, according to Planned Parenthood. “The doctors and nurses who take care of people after sexual assault are usually specially trained. They know how to be gentle, caring, and sensitive,” says their website.

*If you are a victim of sexual assault, you can reach out to the The Rape, Abuse, & Incest National Network, or RAINN, by calling 1-800-656-4673. They are open 24 hours every day and will connect you to a local sexual assault service provider.