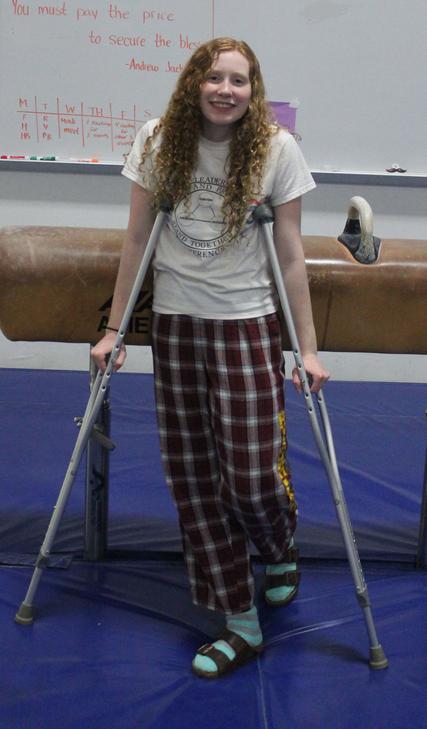 Junior Claire Neuberger’s fracture of her tibial plateau during the gymnastics season also carried onto her spring sport, track.

The fracture occurred during the conference meet for LHS varsity gymnastics on Jan. 28. While Neuberger was doing her floor routine, she landed with her leg straight, bending her leg backward and fracturing her tibial plateau, as well as spraining her ACL, MCL, PCL and the collateral ligament of her knee in the process.

She expressed that even though the injury was severe already, it could’ve had an even worse outcome: “My doctor and physical therapist were both saying that I just got extremely lucky;  I could’ve just completely blown out my knee really easily.”

The doctors Neuberger went to see after the injury at Illinois Bone and Joint Institute explained that she didn’t need surgery after the MRI and X-rays because the injury would heal as long as she did physical therapy and continued using crutches to walk.

Her physical therapy recovery started within the same week of her injury and is still going on. The doctors originally thought that Neuberger would only miss the indoor season of track, until she developed blood clots in her calf from the fracture and was hospitalized.

Neuberger hopes to return “around [April]. Even if I’m not pole vaulting, I hope I’ll be able to do some running or at least do something so that I can at least still be on the team,” she said. Despite her injury, Neuberger is more excited to come back rather than feeling nervous.

Depending on the time she returns, Neuberger hopes to possibly qualify for state this year: “When I ended my season last year, I did not go to state even though I got state-qualifying height earlier in the season, I just didn’t get it at sectionals, so it’d be nice to go this year, but I don’t know if I’ll get back in time.”