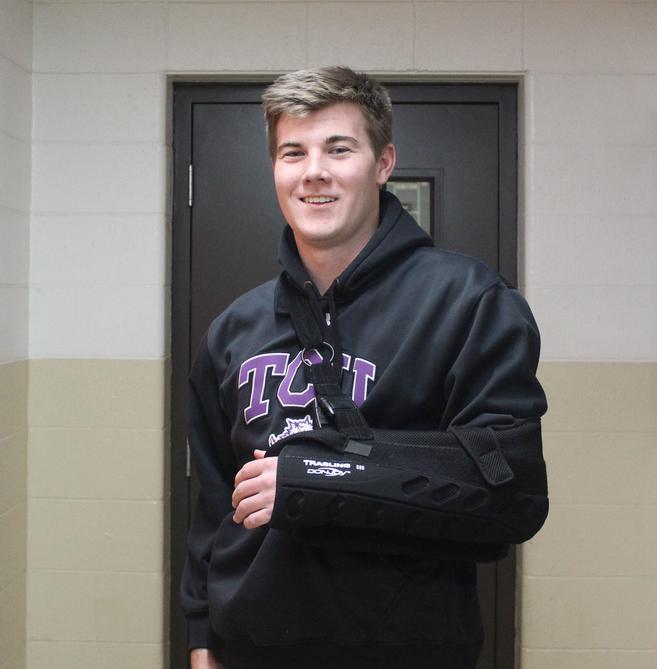 A torn labrum in his shoulder prevented senior Brian McAuliffe from competing multiple times during his final season of football at LHS.

His injury began during the game against Waukegan on Sep. 16.

“I intercepted the pass and I was running with the ball. The defender grabbed my arm and pulled it back, and I felt my shoulder pop,” McAuliffe, a defensive back described.

After visiting the doctor, he was cleared to play with a brace and started to do physical therapy to strengthen his shoulder. After the second instance of injury, McAuliffe received an MRI from which the doctors decided to hold off on the surgery of reattaching the torn labrum in his shoulder until the end of the football season.

The pain increased with every re-injury and McAuliffe would experience non-stop pain: “Every time it would happen, it wouldn’t stop. The pain wouldn’t stop, it would keep on hurting throughout the week and it was hard to sleep.”

The surgery occurred the week following the end of LHS’s football season, in late October. The doctors went into his shoulder arthroscopically, in a minimally invasive procedure, and placed 10 metal anchors to successfully reattach the labrum.

Collectively, McAuliffe will have a total of six months of recovery with physical therapy. This spring, McAuliffe is playing lacrosse. He still has to restrain from participating in the sport for at least another month.

While looking forward to the upcoming season, McAuliffe also explained his apprehensions: “Some things I’ll have to avoid doing like leading with my shoulder or like reaching out at people so [my shoulder] could potentially get pushed back. I’ll just have to be a lot more aware of what I’m doing with my left arm than before the surgery.”