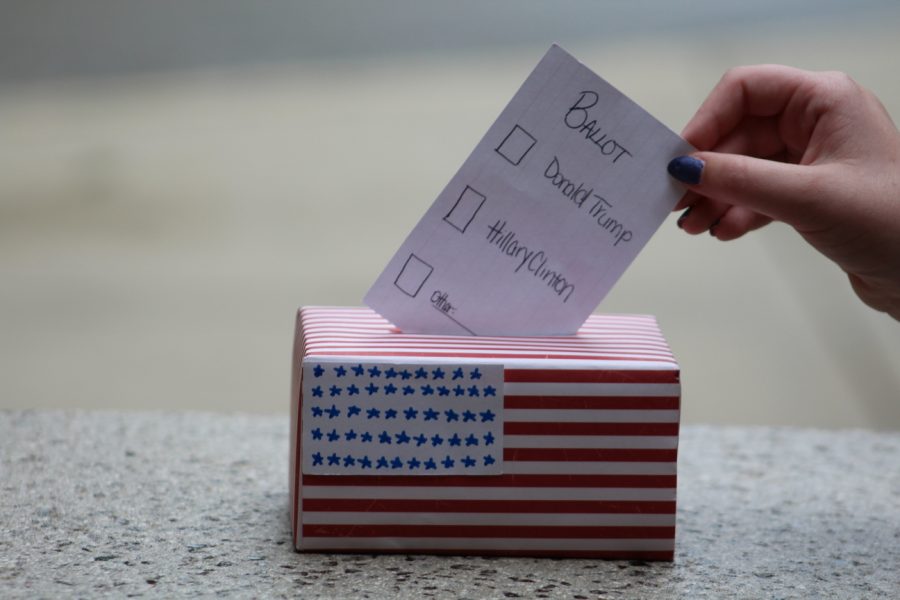 As the deadline for voter registration approaches, students begin to decide who to vote for president.

Lake County Voting: How and Where

As the 2016 presidential election is quickly approaching, many seniors and teachers at Libertyville High School are getting ready to vote in the Nov. 8 election.

In past elections, residents of Lake County have voted Democratic, as has the state of Illinois. According to The New York Times, for the 2012 election between Governor Mitt Romney (Republican) and President Barack Obama (Democrat), Lake County voted 53 percent Democrat and 45 percent voted Republican. This was the same in the 2008 election between Obama and John McCain.

During the 2016 Republican primaries, Lake County voted for Donald Trump. For the Democrats, Hillary Clinton won.

In order to be able to vote, students and teachers first need to register. Some people can register by mail or go to the Lake County clerk’s office in Waukegan. One can also register by using a deputy registrar at the local municipal township, or even online. In addition, voter registration is available at Cook Library.

“I think any opportunity to vote is great,” said Weppler.

New this year, seniors can register to vote at Libertyville High School. Seniors can fill out the form on the LHS social studies home page or use the QR code on flyers around the school.

Then the school’s deputy registrars, Dennis Duffy and Amy Holtsford, will register them. Students will just need to take an oath and fill out a form, while providing two valid forms of ID.

In a recent online DOI article, Libertyville High School’s social studies department supervisor, Shawn McCusker, said, “Instead of having to register at a public facility like city hall, the registration process is much easier for students simply because of the convenience”.

“We may live in a democracy, but no one is going to come and force you to join in and take part. And until you decide that you’re going to take an active role in it, you don’t own a piece of the country,” Mr. McCusker emphasized. “So really that’s what [the social studies department] want people to do. Don’t just be here. Stand up and let people hear your voice.”

In order to find where to vote, registered voters can visit the Lake County Clerk’s website and search their address in the voting information tab.  “You can even see the exact ballot for your district,” said one of Libertyville’s deputy registrars, Amy Holtsford, in an interview over email.

Furthermore, early voting is available from now until Nov. 7 at the Lake County Board of Elections (18 N. County St. #101, Waukegan).Then, from Oct. 24 to Nov. 7, it is possible to vote at the permanent polling places. Additionally, voting by mail or via an absentee ballot is another way voters can file their vote for the next president.

There are some restrictions for first-time voters who want to vote by mail: unless they include a driver’s license, a state ID, or the last four digits of their social security number, they have to vote in person.

First-time voters who registered by mail and didn’t provide a driver’s license, a state ID, or the last four digits of their social security number in their registration, are the only people who have to provide a valid form of ID at their respective polling places.

On Election Day, as seniors and others get to their respective voting locations, there might be long lines during the late evening and night hours as there were during the primaries, when many people had to wait hours in line just to vote.

“I think the (Lake County) clerk has done a very good job. You can vote early or by mail; it’s very efficient,” said Mayor Weppler.