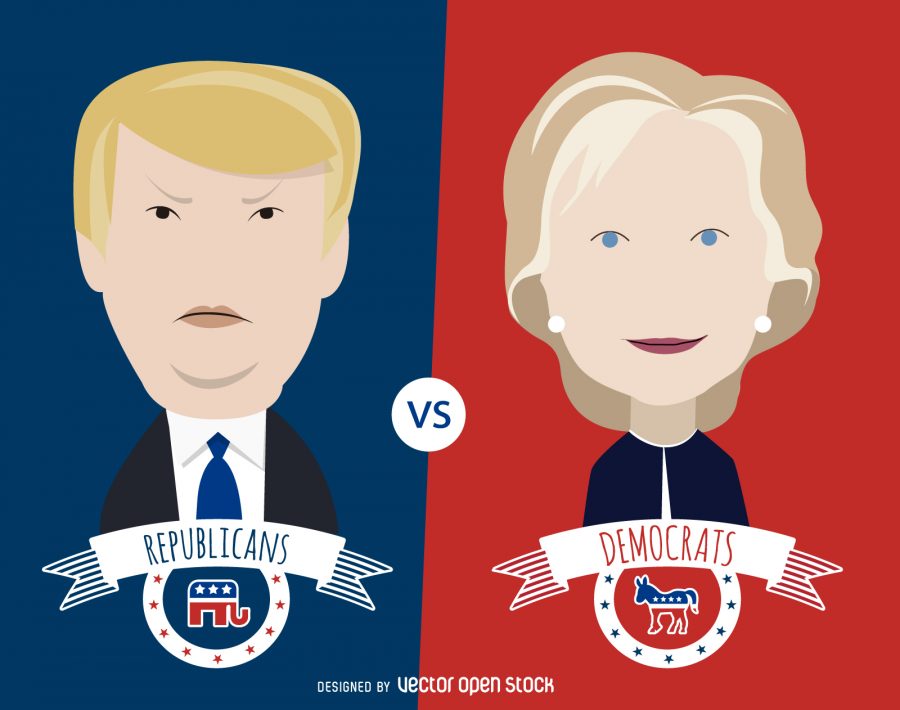 Power to the People

It only happens every four years. As the debates and competition between potential candidates bring us closer to Election Day, many people have to decide which side they fall on: Do they agree with the Democrats or with the Republicans? Or do they agree with a little bit of both?

With unconventional candidates, scandals, and widely differing policies, opinions have never been stronger. This is especially true when considering the pressing issues of the modern world, like the environment and gun control. The controversy over the two major parties’ candidates and their proposed solutions are causing an extreme amount of disagreement over what will be best for America, but one thing is for sure: this election will be one that is taught in schools for generations to come.

The modern-day Democratic Party tends to be the more progressive and liberal party, and this is no exception when looking at Hillary Clinton, this year’s nominee. If Clinton is elected, she would make history by becoming the first woman president. She has experience in politics as a first lady, a senator and as secretary of state. Clinton’s policy views are centered on supporting the middle class, ensuring equal rights for women and minority groups, and diplomacy.

“She’s very progressive,” said senior Katie Chyna, 17, about supporting Clinton. “I think her tax reforms are going to do a lot for our country, and I think (the tax reforms are) going to make a lot more sense.”

In regards to taxes, according to Clinton’s website, the candidate plans on holding large corporations accountable for paying their fair share in order to give a break to the middle class. This in many ways comes from the growing wealth gap in the United States, which places over 40 percent of the nation’s money in the hands of the top 1 percent of the population, according to the Institute for Policy Studies.

While Clinton is certainly an experienced politician, many question her trustworthiness with regards to various scandals.

“I definitely feel like some of (Clinton’s) actions, like with the e-mails, have been a concern,” noted junior Franklin Borre. “I feel like there are some doubts about whether she would be an open and honest president.”

“(Clinton) hasn’t let these media scandals stray her from her passions and her beliefs, like how easily Trump grabs (and uses her scandals) and hangs on to it and acts like a 4 year old,” explained senior Natalie Perritano, a steadfast Clinton supporter who is not eligible to vote. “Besides Benghazi and the emails, she’s held her ground and proven to America why she should be president.”

“You can see that if Hillary would win, it would be a huge step towards women’s rights,” senior Michael Kotzan commented. “And with Trump, he’s been saying all these sexist things, even recently with (a former) Miss Universe.”

The Republican Party has always been a group of more conservative and traditional minds, but this year, the Republican Party’s candidate is anything but traditional. Donald Trump, the prominent American businessman who is now trying his hand at politics, has offered new solutions to many of America’s problems.

Although he is known for his wall idea, in which he proposes building a gigantic wall on the border of Mexico and the United States to keep illegal immigrants out, Trump also speaks out in favor of abortion restrictions, the right to bear arms and bringing jobs back to America.

According to his website, Trump’s economic plans are largely sourced in preventing the outsourcing of labor to other countries by using incentives like tax cuts to encourage competition. He also proposes making imports more expensive in order to encourage the market within the United States.

While some may agree with Campeau, other traditional Republicans, such as senior registered voter Zach Pearson, are having issues with Trump.

“I am definitely a conservative,” said Pearson. “Here’s the thing. It’s a tough position for me to be in because I don’t like Donald Trump. I think he is more of a crook than Hillary is. I think he is an awful person overall. His opinions on immigration, his racism, his sexism and his misogyny (are) all absolutely contrary to what I believe.”

But some believe that if Trump does get elected president, his controversial ideas will not be an issue because of the checks and balances system. This puts Congress in the position to approve or deny legislation.

In the end, some students who said they would vote for Trump said they based their vote not necessarily for Trump, but rather against Hillary.

“(My vote is more based on) cons on the side of Hillary than pros on the side of Trump,” noted senior Emily Olsen, who is not old enough to vote but still maintains her position. “I think (Trump) is just honest.”