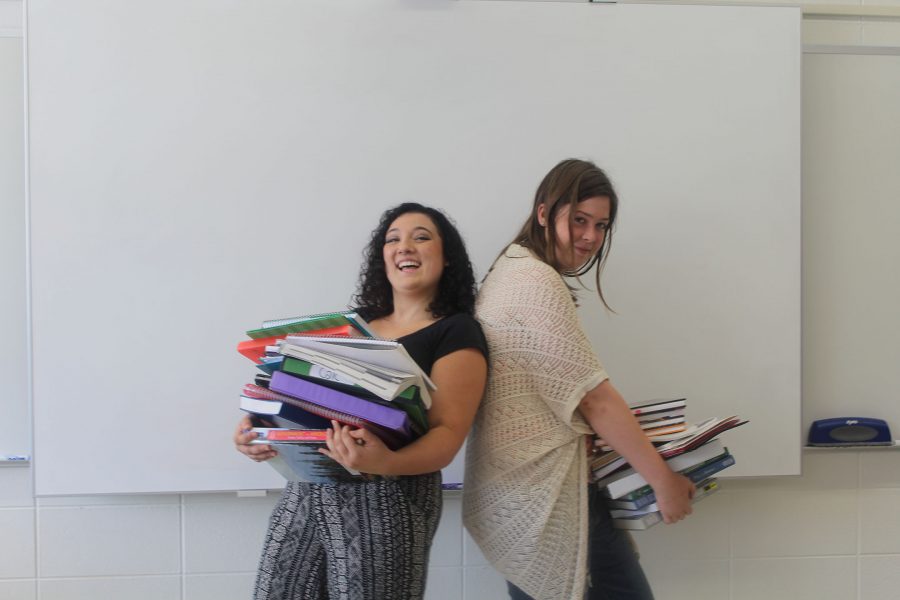 Extra-extra-extracurriculars: How much is too much?

After your three-hour long rehearsal, you rush to your shift at the local Jewel, getting home just in time to take a shower, eat dinner, and finish your homework by 12:30 a.m. Fortunately, the next day is a late start, so you don’t have to be to school until 7, when your morning practice starts; this is a big improvement as most days, practice starts at 5:30. You’re  not even involved in everything you’d like to be, but when do you decide your involvement is too much?

The expectations students put upon themselves to be excessively involved is detrimental; there is already a pressure to take all honors and AP courses, most of which require more homework than their regular equivalents, and adding onto that outside involvement in different activities, it is amazing anyone has time to sleep.

With the pressure to be immensely involved, many students are in extracurriculars that they do not enjoy, for the sole purpose of having another thing to talk about on college applications. This does no good for you, as it can increase stress to be a part of something fruitless instead of being productive. It also hurts the other members of the organization, as they need the same level of commitment from you that they give to the club itself.

I had a friend who joined a sport just because she thought she should be involved in a sport during that season, and she was miserable for months. She hated every minute for her involvement, and did not give much commitment to her team, which made them think less favorably of her than they would have if she had put in the effort.

The idea of being involved in an abundance of extracurriculars makes it very hard to become dedicated to those activities. Without specific dedication, it is almost impossible to get the most out of what you choose to do. Even for those who do choose to only be involved in a few extracurriculars, they usually over involve themselves in them, taking every open shift they could possibly work, volunteering for everything the advisors need help with, making sure everyone else does what they are responsible for, and more. Over involvement can put strain on your enjoyment of the extracurricular, to the point that you may no longer enjoy what you are doing.

While all these extracurriculars may seem fun, important or both, they leave little time for everyone’s top priority: school. At the end of the day, it is necessary to focus on school and homework, which can be difficult when you spend a ridiculous amount of time on extracurriculars. When it comes down to it, homework becomes much more difficult to complete when it’s late at night and you’re exhausted. This accounts for subpar work or the non-completion of certain pieces of homework, which does not help the learning process. Students should not be expected to ace tests when they can’t start studying until midnight or remember what they wrote in their notes when they do those even later.

This cycle becomes awfully vicious when staying up very late to complete homework means that you cannot get as much sleep; being involved in less extracurriculars would give you more time to finish homework, and in turn allow you to get to sleep earlier. Everyone’s had at least one teacher who has complained about how early school starts and how teenagers need at least nine hours of sleep every night while giving them an hour and a half of homework per night. This is no better than a race official telling you that he expects you to medal in a race, and then kicking you a few seconds before it begins, keeping you from being able to perform at your best.

With the average student’s intense extracurricular involvement and heavy course load, getting eight hours of sleep is not humanly possible. The lack of sleep makes it harder to focus during the day and can have a variety of other negative repercussions. According to the National Health Service, some of these repercussions include a weaker immune system, lower mental health, and an increased risk of heart disease.

As fun and rewarding as extracurriculars can be, they are rarely worth the stress they provide and the increased difficulty of focusing on priorities. Students need to pull back from their involvement in order to focus on schoolwork and sleep, as well as giving a little time to themselves every week to spend relaxing.

The number one complaint I hear in the halls of LHS is lack of time (with “I’m hungry” coming in a close second). Most students I know barely have time to breathe, let alone get all their homework done or get a good night’s sleep. Even with the school day ending around three, it seems there is never enough time to get everything done. So what happens when you add after- school activities? Why shove anything more into your already demanding schedule?

The most obvious defense for the busy high school student is college applications. The more activities, the better to place your name a little above everyone else’s in an admissions counselor’s mind (a probably very nice admissions counselor whose shirt just really compliments their eyes wonderfully hi I’m Anna DeNoia please accept me). But that’s not the only reason some students choose to spread themselves so thin.

Take me, for example. Trust me, I understand what it means to be pressed for time. I’d say pressed is an understatement — I am constantly and completely flattened in the time department. I’m at school until at least six — often later — almost daily for the majority of the year to rehearse for the LHS plays and musicals. Add on AP classes, an after- school job and what remains of a social life, and it’s a miracle I’m still (technically) functioning. And sure, maybe I accidentally wore two different shoes to school once because I was too tired to register color, but I have never had any regrets about my packed schedule.

Despite the hectic, never ending time crunch that I live in, I am genuinely happy. As I stare blankly into my Statistics book at some ungodly hour of the night, I am content because I know that if I’d come straight home and gotten it done earlier, I wouldn’t have gotten the chance to sing or dance that day, two things I enjoy about one million standard deviations more than I enjoy Statistics.

I believe that my sad sleep schedule is a small price to pay for pursuing my passion. Every day, I consciously sacrifice what might be a more comfortable, breathable, possible lifestyle for a life of music and theater, and every day I am happier for it.

However, this sacrifice is only worthwhile because it is truly a labor of love. Some students sacrifice their time and state of mind for what will just end up being another bullet point for that nice admissions counselor to skim. Pile activity after activity, hour after hour, sleepless night after sleepless night higher and higher without a strong base of passion beneath them, and it won’t take much for it all to come tumbling down. Of course involvement is important, and we can’t ignore that extra little boost it gives to your applications, but nothing is as important as your own well being.

Extracurriculars are like a stimulant that must be taken in reasonable amounts. Pouring hour after hour into a million things things you couldn’t care less about is not worth the sacrifice it requires. Your sanity is more important than how many hours you’ve committed to this club or that club, no matter how important they seem right now. And if you do let yourself get so busy that the thought of sleep seems like a dream, the only thing that can keep you sane is serious, unwavering passion.

So are all these time-consuming, sleep-depriving, sanity-threatening after- school obligations worth the hassle? In short, if only to justify my own jam-packed lifestyle, I will say yes. Yes, spend your time after school singing or dancing or writing or painting or running or whatever it is you’ve committed your time to, but only if you wouldn’t rather spend that time anywhere else.

If you’re passionate about your activities, pursuing them is worth the time.