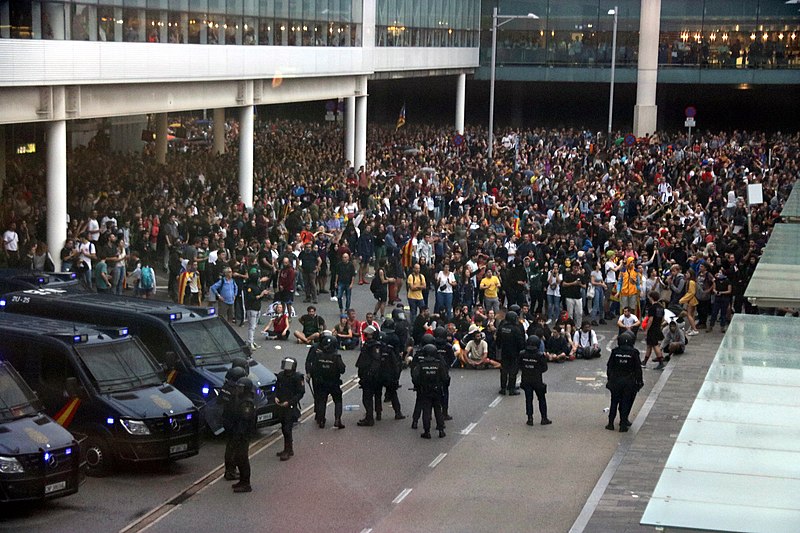 Protesters gather at the airport in Barcelona in October.

The movement for Catalonian independence from Spain is not a new issue; it began in 1939 with the rise of dictator Francisco Franco, but it has taken on a distinct identity in modern times.

The most recent round of protests in Catalonia was triggered after the sentencing of Catalan independence leaders. They were convicted on charges of sedition and other crimes against the Spanish state.  These charges were related to the 2017 Catalonia Independence Referendum.

Back in 2017, Spain decreed that the referendum was illegal and moved riot police to suppress the vote. The Catalonians remained defiant and proceeded with the vote. Voter turnout was low, only 43.03 percent, with causes ranging from Spanish suppression to potential disinterest, according to the Independent.  According to official polling data, the population voted decidedly to leave the Kingdom of Spain, with 92 percent of the voters voting to leave. The leaders of the referendum, emboldened by their success, proclaimed the Republic Catalonia independent. Spain, in response, seized direct control of Catalonian institutions.

The recent wave of protests began Oct. 14 at the Barcelona airport, effectively shutting down the airport. Police moved in with batons in an attempt to disperse the protesters, who responded by lighting cars on fire and throwing acid at police, according to The Guardian. Pro-Catalonian institutions condemned the violence and called for peaceful protests, but the movement continued to grow both in numbers and in violence. Open street battles between protesters and police became commonplace, with violent and peaceful protesters alike being targeted with the same fury by the police, according to video shared by the BBC.

A general strike took place on Oct. 18, and five peaceful marches converged in Barcelona, grinding the city to a halt. Over 25,000 students joined the strike. The strike descended into violence, with barricades being erected and rubble being hurled at police, who responded with tear gas and rubber bullets. The clashes quickly spread to cities outside of Barcelona.

Protests continued daily with wide participation but were re-invigorated on Oct. 26 when consecutive peaceful and violent protests took place. Protests happen often, and violence occurs at them often.