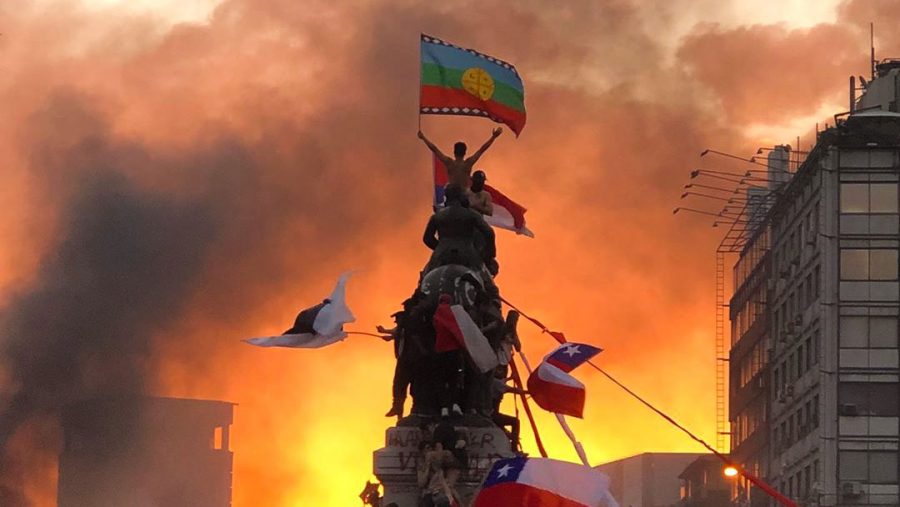 Protester stands at the top of a military statue waving the Mapuche flag, an indigenous group known for their resistance, in Santiago, Chile.

Protests in Santiago, Chile, began over a 4 percent rise in subway fares but have since widened into broader calls for reforms and systematic change. The demands of the protesters include improvements in education, health care and an increased minimum wage. Although Chile is one of the wealthiest countries in Latin America, it is also one of the most unequal; its Gini coefficient value sits at a record-high 0.50, one of the highest inequality coefficients in the world. A Gini coefficient measures the distribution of wealth in a nation, ranging from 0 (perfectly equal) to 1 (perfectly unequal). This inequality is only compounded by an inefficient tax system, placing the burden mostly on the poorer people of the country, according to Bloomberg.

Students began the protests by jumping turnstiles in order to evade the increased fare. The protests quickly expanded into violence as the ENEL power company building and a Banco Chile branch, both located in the Santiago city center, were set on fire. Metro stations and train cars were also hit with Molotov cocktails.

Billionaire president Sebastian Pinera has promised a social reform package that included a rise in the minimum wage and a bill that would overturn the 92 percent rise in electricity rates planned for next month. Despite his best efforts, even more protesters flooded the streets chanting “Chile has woken up” and calling for the president’s resignation, according to Deutsche Welle.