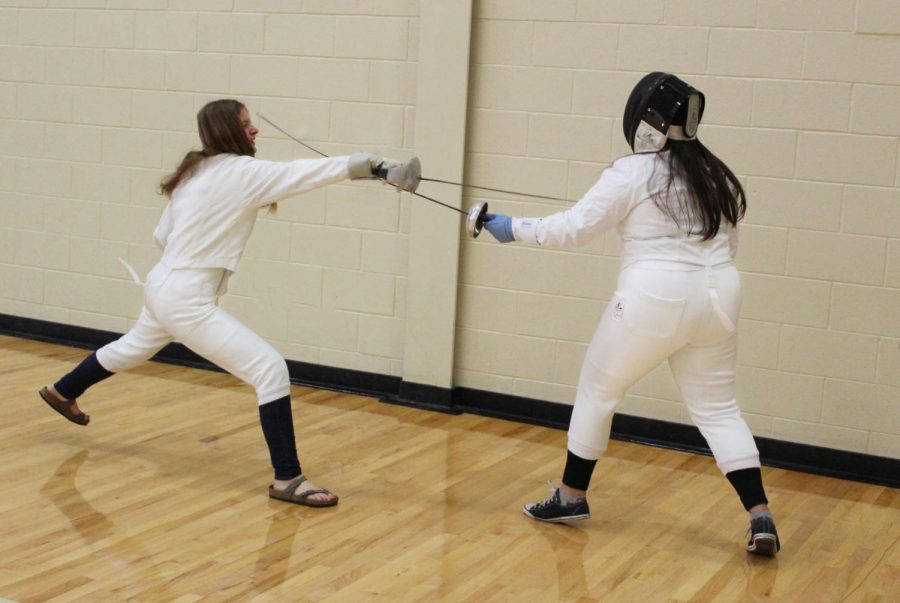 Although fencing is generally recognized as a sport, LHS offers it as a club. Seniors Anna Schellin and Charlotte Stevenson practice for a match.

The Fencing Club at District 128 is a co-ed fencing team called the Thundercats. It is a self-funded club, started during the 2012-2013 school year; it is not considered an official sport. They compete in the Great Lakes High School Fencing Conference.

The Thundercats meet three times a week in the LHS cafeteria for practice and compete in tournaments on most Saturdays. According to Mrs. Nancy Villani, the group’s treasurer and a parent volunteer, the Thundercats do not host competitions at LHS; they travel to different schools to compete.

The season begins in November and goes to the beginning of February. According to Mr. David St. George, the fencing head coach and the epee squad coach, the club was formed with the goal of providing more practice for fencers.

Mr. St. George was one of the original founders. Last year, there were 43 members in the fencing club and this year, there are 31 members.

Mr. St. George has been fencing since 1998 and became interested in teaching it at LHS after enrolling in a fencing class at the College of Lake County as an adult. This sport suited his competitive personality.

“I was approached with the opportunity to help start a brand new fencing team at Libertyville and Vernon Hills High School[s]. I jumped at the chance. I really enjoy teaching students, and it’s really rewarding for me,” he explained.

Mrs. Villani became the treasurer of Thundercats in the spring of 2018 when parents were being asked to take on different roles. She is responsible for handling the money and deciding where it should be spent for fundraising events and activities.

Usually at the high-school level, only one weapon of fencing is practiced by each member. “They kind of find a weapon that fits their personality,” said Mr. St. George.

Regarding the competitions, the events are divided by gender, and there are both individual and team events. The top finishers at the competitions get medals, which are usually distributed from first through fourth or eighth place.

According to Mr. St. George, the Thundercats strive to uphold a supportive environment for each member. Megan Nostrand, a sophomore Thundercat fencer, agreed.

“[The environment of the club] is very positive. It’s very jokey, so we tease each other a lot, but it’s kind of like one big family; I guess that’s the best way to put it,” she stated.

Both Nostrand and Joseph Griffith, another sophomore on the fencing team, feel comfortable in the fencing environment, so much so that fencing has impacted their social life.

“It allowed me to find another group of friends to hang out with, and it’s just generally fun. I think [the team is] pretty close,” Griffith said.

Nostrand believes that fencing has given her the opportunity to meet new people and form new friendships, which she said has pushed her out of her comfort zone.

Some important skills to have when fencing are to “be able to outsmart your opponent — that’s really the main part of it. It’s like mental chess, which is how my coach puts it,” explained Griffith.

Similarly, Nostrand feels that, “you obviously have to be able to adapt quickly. You have to have quick reflexes, and you also have to be aware of what is going on because you don’t know what your opponent is going to do.”