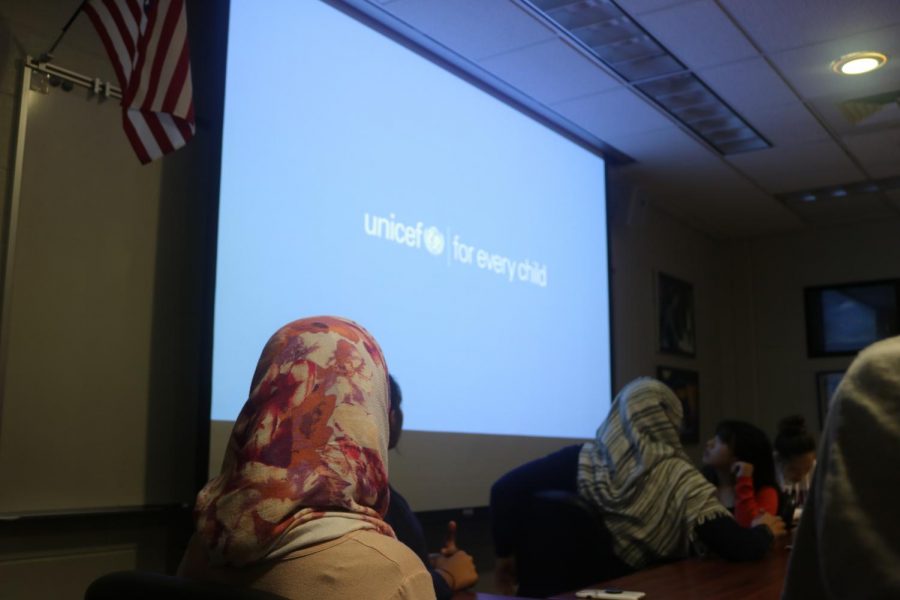 Students interested in UNICEF watch an informational video about how the organization helps children around the world.

UNICEF, which stands for United Nations International Children’s Emergency Fund, was established in 1946 by the United Nations and has spread around the world to different locations, including Libertyville.

The international UNICEF organization strives to “save children’s lives, to defend their rights, and to help them fulfill their potential, from early childhood through adolescence,” according to the UNICEF website. Similarly, the goal of the UNICEF Club at LHS is to bring awareness to their purpose in the Libertyville community and raise money to support the cause of UNICEF.

The club at LHS was founded by Mariam Tolba, a 2018 LHS graduate, about three years ago. Currently, Brendan Rattin, a senior at LHS, is the president of the UNICEF Club. Rattin got involved with the club at LHS during his freshman year.  “At first I didn’t know what UNICEF was, so a friend invited me to join a meeting and when I got there, I kind of loved it because I loved everything [the club] stood for,” Rattin explained.

Mrs. Jennifer Uliks, the activities director, is the faculty advisor for the club. She believes that for such an international organization, the role of the UNICEF Club at LHS is to “bring students together for a bigger global purpose … This gives kids the opportunity to help children all across the world.”

Mrs. Uliks became involved after being approached by Tolba. After accepting the position, Mrs. Uliks remembered that she had a deeper connection to children from other parts of the world who are less fortunate than Libertyville because she visited Vietnam with her brother and sister-in-law when they were adopting children.

“I got an opportunity to see what the conditions were of children living in orphanages in Vietnam and how heartbreaking it was to see children in that environment,” discussed Mrs. Uliks.

The club often hosts fundraisers to raise money and awareness for UNICEF. The   group has worked at Culver’s, hosted bake sales, sold UNICEF t-shirts and held penny wars between classes in the past; they sent the money that they have earned to the international UNICEF organization.

They have also produced videos for the morning announcements about different topics such as clean water, human trafficking and child labor.

Every month, the UNICEF Club has a different theme to promote awareness. The theme usually coincides with what the international UNICEF organization is advocating for that month.

In October, there is an event called Trick-or-Treat for UNICEF that the LHS club participates in. Instead of asking for candy, the club members go door-to-door asking for donations, which go directly towards UNICEF. According to Rattin, this event raised more than $800 last October.

The club meets every other Thursday in Room 1107 for roughly 15-20 minutes to discuss their goals, future awareness events and/or fundraising ideas. Last year, the UNICEF club had around 25 members. This year, Mrs. Uliks hopes to have 35 members or more join UNICEF.

One of Rattin’s favorite parts about being in UNICEF Club was participating in the “Live Below the Line” event, which challenges people to spend less than a dollar on food per day for a duration of five days; this is done to have a slight understanding of how people in the U.S. and around the world have to live under these conditions on a daily basis.

“[The challenge] was really hard, and I just couldn’t imagine how people could subsist on less than a dollar a day,” said Rattin.

Mrs. Uliks said she is now more aware of the day-to-day commodities that we take for granted, such as clean drinking water, child labor laws and our daily meals.

Rattin expressed how UNICEF has impacted him as a person throughout the years he has been in the club.

“It’s definitely made me more aware about how lucky we are in Libertyville,” he said. “And it’s made me rethink my position in the world because we are in a privileged position where we have food and water and gender equality and access to education, but lots of children around the world lack that. It’s really made me thankful.”