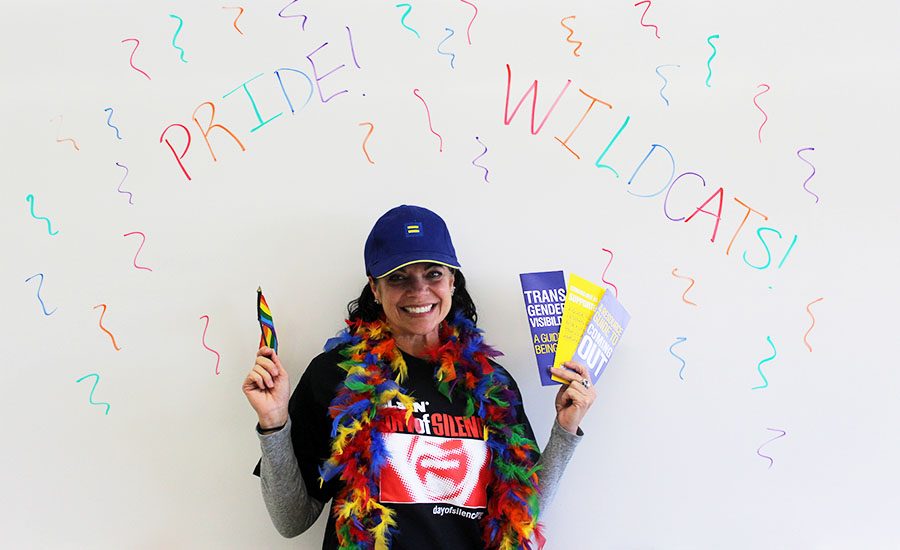 After Ms. Naslund’s encounter with a negative letter about a gay student, she became very passionate about fighting for the rights and equality of the LGBTQ+ community. She takes pride in her club, Gay-Straight Alliance, and is also an activist outside of school.

In the year 2000, Ms. Dyan Naslund, American lit and College Preparatory Writing teacher, was the advisor of the school newspaper, Drops of Ink. The staff had elected to write and publish an article about what it was like to be in the closet, where they anonymously featured a student who was gay but not “out.” After the release of this issue, a letter to the editor was written back to the magazine from a P.E. teacher. This letter condemned being gay, calling it sinful and wrong.

Immediately after this letter was published in the following issue, students and faculty sent in their support. A student by the name of Danny Sweeney sought out Ms. Naslund, telling her, “We need a Gay-Straight Alliance at this school.” Ms. Naslund willingly agreed and became the advisor, a role she still holds today.

Since the creation of GSA at Libertyville, gay rights have become a passion for Ms. Naslund.

“One of the top priorities for me, as a person, is to be the best ally that I can be of LGBTQ people because they have been such a marginalized group. They have had to fight for rights that should come so easily, in a way that others take for granted,” she said.

In addition to being the faculty adviser of the Gay-Straight Alliance at LHS, Ms. Naslund volunteers for the Human Rights Campaign, has attended every Chicago Pride Parade for the last 10 years and even incorporates LGBTQ material into her classroom.

“I just feel like a world or a country with more rights for people is a country that feels more like a community, and the only way that we can keep each other happy and safe is if we have that sense of community. The more that people feel divided, the more chance there is of dissent and violence in our society and why would we want that?” Ms. Naslund said. “I think we all should look at the rights of all marginalized people, whether that be on race or ethnicity or economics or sexual orientation. The more we can make people feel like they belong in a society, the less chance we have of that society collapsing.”