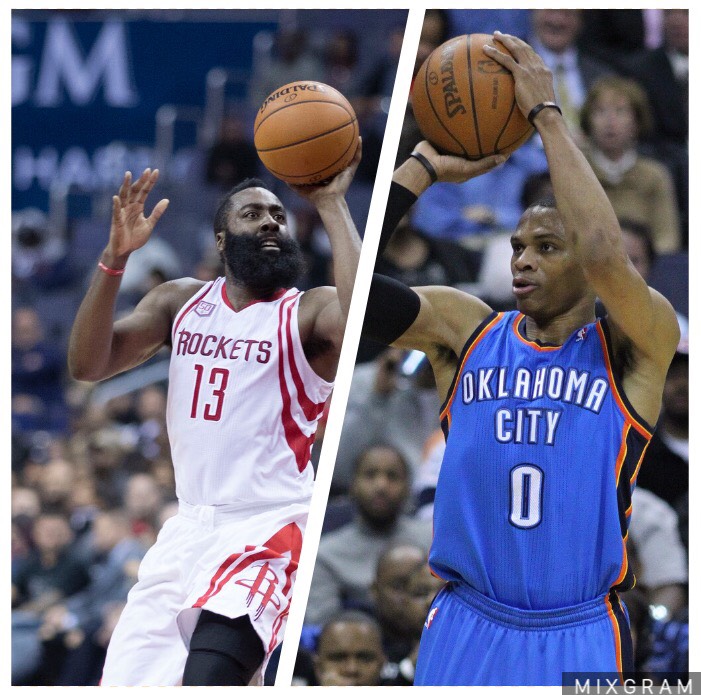 The 2016-2017 NBA MVP race is one for the ages. There are five strong candidates, but Kevin Durant broke his foot, Kawhi Leonard had a slight decrease statistically and LeBron James and the Cavs slightly faltered at the end of the season, leaving us with two players who are having two of the best statistical seasons ever.

Russell Westbrook is the first player ever to average a triple-double while leading the league in scoring, at 31.8 points per game. However, James Harden is second in scoring with 29.2 points per game and has a league-leading 11.2 assists per game. Here are some of the reasons why each player should win the award.

Harden is having one of the most efficient seasons of all time, while leading the Rockets to 54 wins. In NBA history, every MVP has been on a top-3 seed in their respective conference. The Rockets are the third-best team in the West while the Thunder are sixth. Harden’s team has a legitimate chance to win the title, while Westbrook’s team doesn’t.

The common argument against Harden is that he plays with better teammates, so his team should be better. I would actually disagree and say Westbrook’s supporting cast is as good, if not better than Harden’s.

If we were to have a re-draft of all Rockets and Thunder players (excluding Harden and Westbrook), then the Thunder’s Steven Adams and Victor Oladipo would most likely be the first 2 picks. The Rockets preseason projected win total, according to ESPN was, 41 wins, while the Thunder’s was 43 wins. If Harden’s supporting cast was better, the Rockets would have had a higher projected win total. Harden elevated not just his play, but his teammates’ play as well. He constantly creates open looks, which is why the Rockets shattered expectations while having the 10th-best offense in NBA history.

Another popular argument for Westbrook is that he is the only player since 1962 to average a triple-double for an entire season. There’s no denying how impressive that is, but if you look at the numbers, Harden had a better statistical season. Harden created 57.6 points per game, which is better than Westbrook’s 56.5. Westbrook does have the rebounding edge, but a closer look at the numbers would suggest that he grabbed many meaningless rebounds. Westbrook grabbed a league-high 91 rebounds off of missed free throws, which helped pad his rebounding totals.

Obviously Westbrook was incredible this year, but Harden is the first player in the last 40 years to score 2,400 points and have 900 assists in a season. He was much more efficient too, becoming the first player since the 1980s to average 29 points a game on only 19 shots per game. Westbrook, on the other hand, led the league in missed shots.

Harden is the MVP and it isn’t that close.

There is no denying that James Harden has had one of best individual seasons in NBA history, but he still has not done enough to win the MVP over Russell Westbrook. Westbrook is smashing records that, a few years ago, nobody ever thought would be broken. In 1962, NBA legend Oscar Robertson had the best individual season in NBA history up until this year, when he averaged a triple-double and tallied a total of 41 triple-doubles. This season, Westbrook became the second player ever to average a triple-double and broke Robertson’s once-thought-unbreakable record by posting 42 triple-doubles. Another NBA record that Westbrook set was that he scored at least 50 points in three of his triple-double performances. He also was the first player to ever record a triple-double without missing a shot.

The magnitude of the triple-double and how impressive of an individual performance it is is hard to comprehend, especially at the rate in which Westbrook churned them out. Heading into this season, the average NBA season had about 35 triple-doubles for the entire league, all season. Westbrook single-handedly outpaced the league average with 42 triple-doubles. And not only was Westbrook piling up the assists and steals, he led the NBA in scoring with an astounding 31.6 points per game.

One of the main arguments against Westbrook is that Harden led the Rockets to a better record than the Thunder. Although wins are important, it is not like the Thunder are a bad team. Westbrook still led them to the playoffs, which usually is enough to win MVP. Westbrook put up arguably the best individual statistical season in NBA history and with the postseason added to his already impressive individual resume, how could he not be the league MVP?