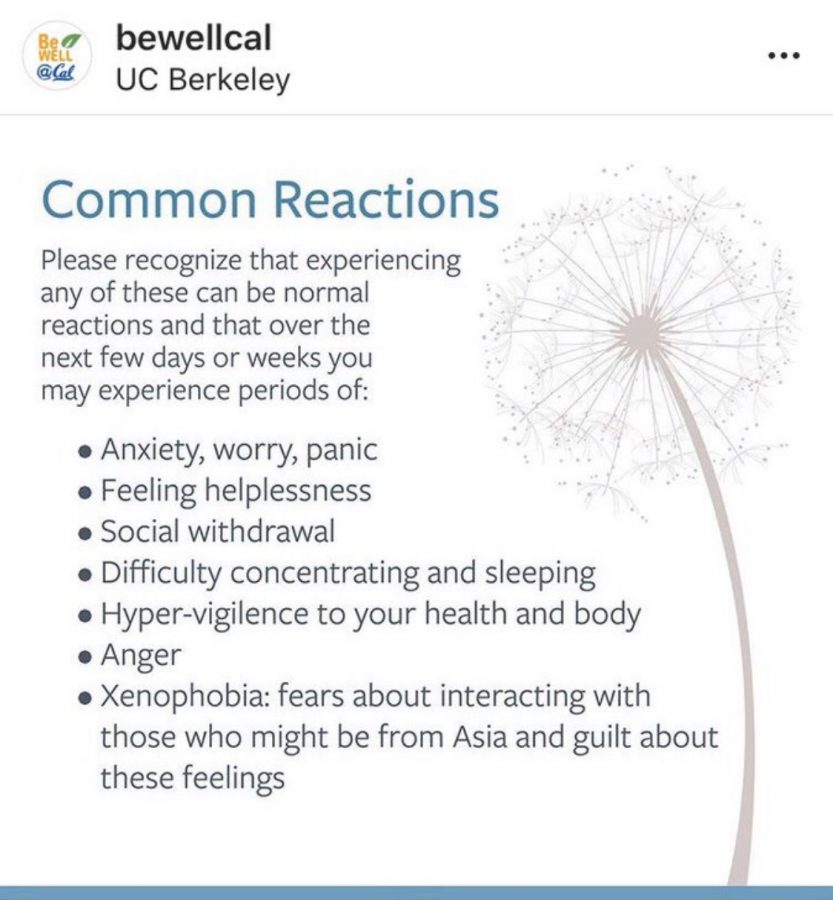 @bewellcal, the University of California at Berkeley’s official wellness account, listed xenophobia under a list of “Common Reactions” to the spread of the new coronavirus.

Coronavirus and the scary effects of xenophobia

The above-mentioned are just some of the slew of offensive comments I saw that had garnered tens of thousands of likes on an Instagram post of a female Chinese blogger eating bat soup. Ever since reports of a new coronavirus in China surfaced in late December, the virus has been the subject of countless posts on my social media feed.

The U.S. Centers for Disease Control and Prevention defines coronaviruses as viruses that are common in different animal species. In rare cases, they can mutate and infect humans as is the case for Coronavirus Disease 19 (COVID-19), the one that was most recently identified.

The captions of several Instagram posts blame the eating habits of “dirty” Chinese people for the outbreak of the coronavirus. However, such claims are misleading on multiple levels. Several of the videos and photos circulating around the internet were taken outside of Wuhan, China, where the virus was first identified. This includes the video of the woman consuming a bat, which was filmed during 2016 in Palau, an island country located thousands of miles away from mainland China.

The exact origin of the outbreak still remains uncertain, so these posts are also operating solely on speculation. According to Science Magazine, researchers are currently analyzing DNA sequences from COVID-19. There is strong evidence linking “wet markets” like the Huanan Seafood Market in Wuhan to the spread of the virus. However, there is not yet confirmation as to exactly how that is the case.

While social media platforms often act as powerful tools to raise awareness, they can easily become plagued with the spread of misinformation and the promotion of xenophobic ideas. The phrase “these people” itself is also largely problematic. Not only does it create baseless generalizations about large portions of the human population, but it also allows people to implicitly reinforce cultural ignorance with minimal guilt. Separating anyone foreign as “them” versus “us” creates enough of a detachment to allow for the villainization of certain groups.

The mindset that all things “strange” or “different” are bad is a dangerous one to hold. The extent of xenophobia present around the world in the wake of the coronavirus is alarming. News.com.au, an Australian news outlet, reported that a man died outside a Chinatown restaurant in Sydney after bystanders refused to assist him for fear of contracting the coronavirus. The fact that people were able to act indifferently towards a fellow human being in dire need of medical attention reveals the spread of something more frightening than a virus.

Displays of racism also extended to the University of California Berkeley’s official wellness account on Instagram . When addressing the global panic surrounding the coronavirus, the supposedly informational post listed xenophobia as a “common reaction.” It is troubling that a source intended to inform students about health used its platform to normalize the stigmatization of a community that is especially prominent at Berkeley.

According to the university’s own fall enrollment data, over 17 percent of new students in 2019 identified their ethnicity as Chinese, and Asians overall make up more than 40 percent of that freshmen class. School officials promptly removed the post and issued an apology, but its discriminatory stance was still felt regardless.

The informational email that District 128 parents and students received from superintendent Dr. Prentiss Lea on Jan. 30 did not make the same mistakes. After news that the first person-to-person transmission of the virus in the U.S. took place in Chicago, both Dr. Lea’s message and a letter from the Lake County Health Department highlighted that “immediate risk to the public remains low.”

However, this does not mean that Libertyville is completely devoid of racist behaviors regarding the coronavirus. While talking to some Asian-American peers, I heard of instances where people were targeted solely because of their race. From strangers getting in the face of a girl and taunting her about the coronavirus to people singling out an Asian student for coughing in class, a small fraction of the population has taken it upon themselves to hatefully express unnecessary fears.

In my own experience, reports of the coronavirus have made both me and my family members more aware of how we conduct ourselves in public spaces. When my mother and I were at O’Hare International Airport on our way to a college visit, she choked on her water and started coughing. She then half-jokingly stated, “I probably should not have done that here.”

Although she was not entirely serious, her reaction speaks to how sensitive people are amid the outbreak. Especially as we prepared to travel, there is no doubt that we felt extra eyes on us.

Once you look at the numbers, there is a discrepancy between the actual threat of the coronavirus and the perceived threat of it. The CDC reports that as of Feb. 18, there have only been 15 confirmed cases of the virus in the United States, and American officials broke news on Feb. 8 that the first and only U.S. citizen had died of the virus.

In contrast, the CDC’s preliminary burden report for this year’s flu season estimates that from Oct. 1, 2019, to Feb. 1, there have been between 21 million and 31 million flu illnesses and 12,000-30,000 flu deaths. The numbers are not even comparable. Even when taking into account the fact that we are still in the relatively early stages of the coronavirus outbreak, the flu poses a more imminent threat to Americans than COVID-19.

Living in the polarized society we do, people seem to constantly be looking for new reasons to isolate anyone different from themselves. Social media is a powerful tool that connects and informs so many of us, but on the other side of raising awareness is spreading ignorance. All too often, the rapid spread of news through the internet causes the line between caution and panic to be crossed in favor of the latter.

The outbreak of COVID-19 has been named a global public health emergency by the World Health Organization and should not be taken lightly. It is completely understandable for people to feel a level of anxiety connected to the virus. However, the coronavirus is not a justification to impose racist ideas on people of Asian descent.

As new information continues to roll in, try to be mindful before jumping to conclusions. It is important to realize that the fear we harbor can be more dangerous than the very thing that appears to be a threat.