A Look At Historical Libertyville

A view of Downtown Libertyville from 1946

“As someone who has studied Libertyville history for years, I really love the fact that our town has the same strong sense of community now, as it did 150 years ago. People who live in Libertyville have always been captivated by her character. I think that’s why you see so many families live here for generations. There is a unique and special excitement Libertyville residents have for our area.”

– Jim Moran, VP of the Libertyville-Mundelein Historical Society and a former DOI reporter

The history of modern Libertyville begins in the early 1830s when English settler George Vardin and his family arrived in what is now Libertyville. The small settlement that soon developed was known as “Vardin’s Grove.” In 1836, during the Independence Day celebration, area residents voted to call their town “Independence Grove.”Mail service from Chicago to Milwaukee was established in 1836, prompting area residents to petition for a post office. The request was granted and the first postoffice was established in the former Vardin cabin (where the Cook House now stands) on April 16, 1837. The Village was also registered under the name “Libertyville” on that day because an Independence Grove post office already existed in the state at that time. The name of the Village was changed again when, with the creation of Lake County in 1839, Libertyville was made the county seat. The new name, “Burlington,” lasted until the county seat was moved to Little Fort (now Waukegan) in 1841. At that time, the Village reclaimed the name “Libertyville.”

The land was property of the Illinois River Potawatomi Indians until August 1829, when economic and resource pressures forced the tribe to sell most of their land in northern Illinois to the U.S. government. The history of modern Libertyville begins in the early 1830s when English settler George Vardin and his family arrived in what is now Libertyville. The small settlement that soon developed was known as “Vardin’s Grove.” In 1836, during the Independence Day celebration, area residents voted to call their town “Independence Grove.”

While it may look abandoned, the Fould’s Macaroni Factory, located on East Church St., is very much in action. It is the factory and headquarters of Fould’s Macaroni Company, which moved to Libertyville from Cincinnati in 1906. The structure, originally a ladder factory, was built in 1894 with timbers from the 1893 World’s Columbian Exposition in Chicago. In its early years, Fould’s was a major employer in Libertyville, well-known for its summer company picnics and winter Christmas parties, to which the whole town was invited. 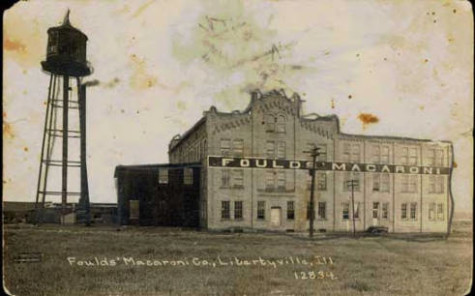 The gate’s history starts with Britton I. Budd, a Chicago railroad executive and president of the Public Service Company, whose wife Katherine was well-known for her work with disadvantaged children. Upon Katherine’s death in 1925, Budd bought 200 acres along the Des Plaines River north of Libertyville for the purpose of building a summer camp for children from St. Mary’s Orphanage in Chicago. The Katherine Kreigh Budd Memorial Home for Children was opened on June 27, 1926. The camp consisted of 15 buildings, including dormitories, a dining hall, a recreation hall, a chapel, an infirmary, an outdoor swimming pool and a playground. Also known as Doddridge Farm, the camp welcomed girls from the orphanage for many years. In 1955, Franciscan brothers repurposed the site as St. Francis Boys’ Camp until 1973. The camp was opened to girls until 1979, when the camp closed for good and the buildings were demolished.

The track opened in 1904 as a harness racing venue. Harness racing is a form of horse racing in which horses race at a trotting pace pulling a two-wheeled vehicle called a sulky. A few automobile races were held there in its later years. Samuel Insull bought the track in 1918 and closed it — reportedly due to his objections to gambling. The heart of the track was located at the intersection of today’s Crane, Carter, and Rockland Roads. 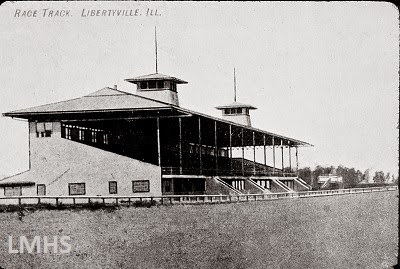 Local library service began in 1909 when the Alpha Club (now the Libertyville Women’s Club) began a subscription library in Decker and Bond, a local drugstore. The small collection of books soon outgrew the few shelves in the drugstore and in 1914 found a new home in the Libertyville Village Hall. In 1921, the home and property of Ansel B. Cook were left to the village of Libertyville for library and park purposes; Cook Memorial Library opened to the public in November of that year. The first head librarian, Blanche Mitchell, lived with her husband in one of the upstairs rooms of the Cook House.

Copeland Manor School opened in 1957 as a result of the baby boom after World War II. 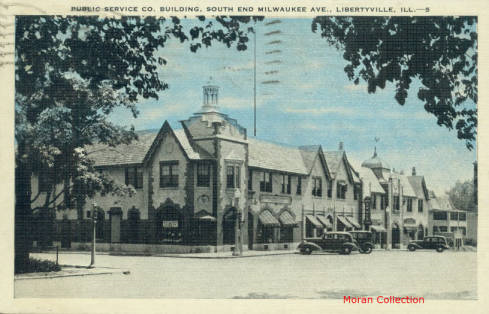 One night, in 1895, cigar maker Max LeBeau was up late working to finish cigar orders. Around midnight, Max got up from his chair, walked to the front of his shop and looked out the window. What he saw were huge flames leaping skyward in back of Schanck’s Hardware store on the corner of Sprague (now Cook) and Milwaukee (Rolland’s Jewelers, across from Picnic Basket). Max called “Fire! Fire!” rousing many people from their sleep. Bucket brigades quickly formed because there was no fire department. The cause of the fire is unknown to this day.

The Liberty Theatre opened its doors on Aug. 27, 1937. The owner, Fred W. Dobe, first polled the community to determine whether or not Libertyville was satisfied with the existing moving-picture facilities on the second floor of the Gridley Building. When Mr. Dobe was convinced that the area would support a modern theatre, he proceeded with plans for the building. At the time of its opening, the Liberty was admired for its ultramodern design, 700-seat capacity, parking lots and air conditioning. Actor Marlon Brando was employed as a theatre usher for a short time, when he lived in Libertyville between 1939 and 1941. 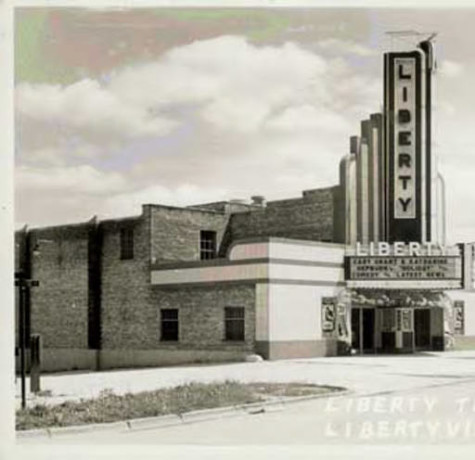