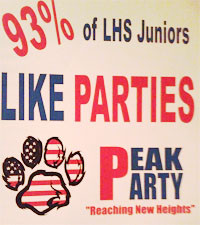 The senior class officer winners ran as part of the Peak Party; their poster is seen here.

LHS Student Council class officer results were announced on May 20, with the addition of promising new representatives to the board.

Joseph Amdur (President), Joey Nedland (Vice President), Ingrid Reid (Secretary), and Max Sun (Treasurer) fashioned LHS’s first ever Student Council political party, formally known as the “Peak Party,” promising the senior class student body a future of innovation and involvement. With over 200 current juniors participating in the vote, the party won the class majority in all four sectors. According to junior Andrea Gattone, it was their dedication to representing each distinct voice that won her vote.

“I decided to vote for the Peak Party because I think it’s time Student Council has a change in representation. I’m looking forward to seeing some new people on the board, and I think that Jojo, Joey, Ingrid, and Max will do a good job implementing change and making sure everyone’s opinions are heard,” she commented.

The Peak Party will strive to include more of the student body in school events and activities next year and has already discussed plans to achieve this, one of which includes featuring student DJs rather than hired professionals at dances.

The junior class officer winners for the positions of President, Vice President, Secretary and Treasurer are Mark Boynton, David Black, Jordan Rule, and Joey Pucino, respectively. President-elect Boynton appealed to the student body’s sense of democracy, articulating the implementation of an improved student suggestion process in his campaign.

“We have so many people with great ideas and I would love to get the chance to listen to these and utilize them in order to make our experience together even better,” Boynton expressed in his election statement.

Former freshman class president Cam Chen ran unopposed for the sophomore presidency, reeling in an astounding margin of over 200 votes. Sean O’Malley, Emily Yates, and Katherine Liu won the remaining positions, all of which were incumbent members of the board.

Vice President Sean O’Malley has ambitious goals for next year, including raising appeal and participation in areas such as class fundraisers, dances, and pep rallies.