Microtrends and TikTok’s Effect on Fashion 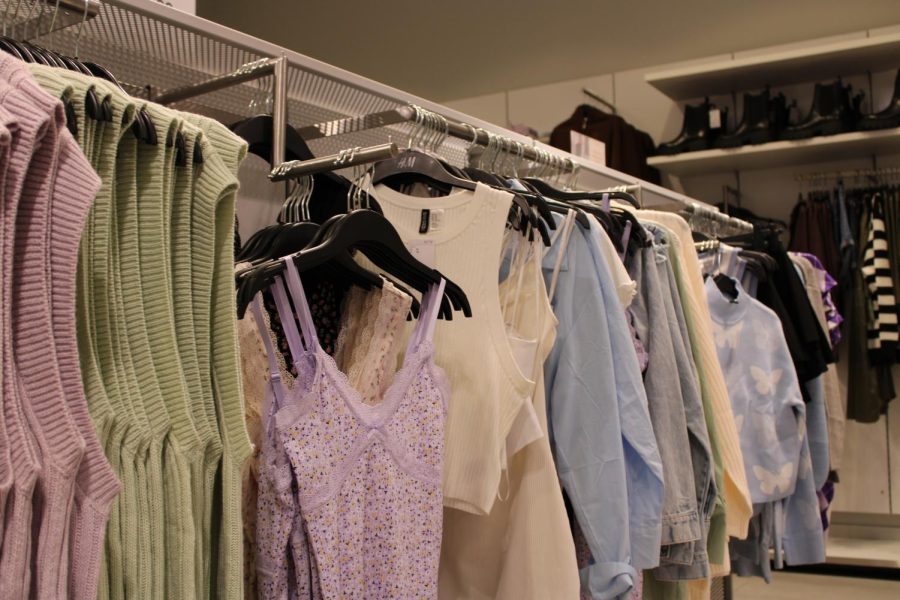 A display at H&M is filled with popular trends at the moment, such as sweater vests, slip dresses, and oversized button downs. Most likely, in a couple weeks the items displayed today will be on the sales rack because of the accelerated trend cycle, which causes pieces to rise and decline in popularity at a faster rate.

This summer, crochet clothing was everywhere. From dresses to tote bags, something crochet could be found in almost every clothing store. Crochet was trending on TikTok, and not just specific pieces, it was everything crochet. But now, all of that has seemed to disappear, maybe because summer has ended, or maybe because this rise in popularity of crochet clothing was the perfect example of a microtrend, quickly trending and then quickly vanishing.
Defining Microtrends
Good on You, a website dedicated to researching and scoring the sustainability of brands, defines microtrends as average trends that “rise to popularity quicker and then leave the trend cycle faster,” contributing to ultra-fast fashion. Before diving deeper, it is key to understand the trend cycle and its history. The trend cycle consists of five main stages: introduction, rise, acceptance, decline and obsolescence, all pretty self-explanatory.

The trend, usually an item or style, is introduced, rises to popularity, is accepted by the masses, declines in popularity and goes out of style. In the past, this trend cycle used to last 20 years, but due to the rise of TikTok and social media, the cycle has accelerated to mere months or weeks.

Dr. Debra Kellum, who teaches fashion marketing at LHS mentioned that she has personally seen the difference. “Fashion changes more and more rapidly now,” stated Kellum. Even in the more recent past, trends used to last three to five years, or at the very least a season, but now pieces are going out of style before the majority of people even have a chance to purchase the item. This sped-up trend cycle is what creates microtrends, and in turn, fuels fast fashion. Companies such as Shein and ASOS benefit from microtrends, as they have the capabilities to mass produce cheap trendy clothes, releasing sometimes thousands of new items every week often at the expense of quality, sustainability, and ethical production.
TikTok and the Rise of Microtrends
The rise and acceleration of microtrends is primarily caused by TikTok and other social media platforms. The short and sweet videos of TikTok allow for hypervisibility, as the scale of the platform means more possible trends, often in the form of hauls or sponsored posts, that reach more people. When more people see something, they want something, creating a microtrend.

That’s where fast fashion comes in to recreate this trend at a low cost and a low quality. By the time these items arrive at the consumer another trend has already popped up, simply because of the constant creation of content and clothing. Even if there weren’t new trends, the clothes produced from fast fashion sites as microtrends don’t last long.

“The materials that they are using are really kind of cheap plastic stuff that breaks down…they’re kind of disposable clothes,” said Kellum.

Social media also plays a role in why people buy into trends. Just by being human, people often have a fear of not belonging, but this fear is heightened by social media because if someone sees TikTok after a certain item, they are more likely to purchase that item because they think everyone is wearing it and don’t want to be left out.

“I sometimes think that feeling to be part of the group and to be ‘in’ is so powerful that… buying those clothes is very important [to teenagers],” Kellum explained, tying it to the fact that teenagers’ brains aren’t fully developed yet. This thought process of wanting to be included becomes a habit so that whenever there’s a new trend, people buy into it.

Similarly, when purchasing a trend, people get excited, so they do it again and they buy another trendy item. But oftentimes, the second time around, that bit of pleasure diminishes, so it’s a continuous search for a trend that reignites a person’s excitement, forming another habit.

Social media and this habit cycle of buying to trends makes it hard for senior Riley Kurland to ignore microtrends. “I see it every day,” she says. “Social media and TikTok is a huge thing. So when you see it all over, and let’s say you like the video, you’re [going to] see more like that one video. So I’d say it’s kind of hard to not recognize it.”

Similarly, because teens are often online, they are more likely to play into microtrends than adults. “A lot of it [trends] comes from social media,” senior Olivia Schiff shared, “and my parent’s [trends] are just from mutual people that they know.”
Combating Overconsumption and Building a Personal Style
One of the main problems with microtrends is that they promote overconsumption. In an interview by NPR, it’s said that the issue with fashion today is “the idea that a wardrobe is revolving… people striving to constantly replace things.” Microtrends play into this, as new things seem to be “cool” every week. Combating microtrends and fast fashion is difficult as it requires you to ignore what’s trending in favor of buying things that you will wear and re-wear, curating a wardrobe and personal style of timeless pieces. This is harder for teenagers than adults, especially when faced with the possibility of buying ten items off a fast fashion site or one to two more sustainable items.

Dr. Kellum’s advice is to repurpose clothes. “I would suggest folks need to start raiding their friends and family’s closets,” Kellum said, “or get something and make it their own fashion rather than following what other people say is the fashion.” She advises buying staples. “I have some trendy clothes…but also a lot of classics that [I] can wear year after year,” said Kellum.

Similarly, Riley Kurland tries to pick things she feels comfortable in. “If I don’t feel comfortable with a piece, I’m not going to wear it,” Kurland explained. She also only buys clothes she can fit into her personal style rather than just what’s trending. In addition, she mentioned that she tries not to play into microtrends simply because it’s a waste of money, as often they don’t fit into her style and are out of fashion so quickly.

Schiff, on the other hand, is still in the process of building her style. “I’ve definitely tried to start building my own sense of style,” she said, “and I feel like my own style doesn’t necessarily fit into some of the newer trends.”

All of this plays into Good On You’s advice to create a “production concept” of one’s wardrobe, having an idea of what someone wants in their wardrobe and then buying pieces that fit that goal aesthetic and function, only playing into trends when there is another purpose for the item once the trend is gone.

Microtrends aren’t inherently bad, allowing people to express themselves through what they wear and for others to get inspired to grow their own sense of style. The problem only arises when pieces from trends can’t be reused or fit into a person’s style after the month or so that it was popular. Like microtrends, cheap fashion has its place, allowing those that maybe can’t afford more sustainable options to have clothes that are trendy and affordable. But fast fashion brands are also part of the problem, with their unethical practices, environmentally devastating production, and enticing cheap prices that lead to overconsumption.