The Importance of Having a Routine 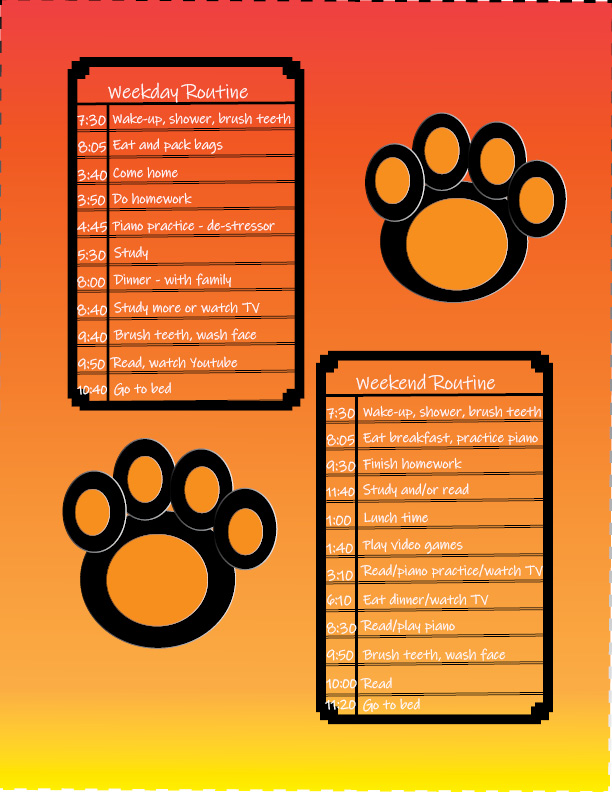 Back in 6th grade, I was struggling to make B’s in most of my classes. My nonexistent work ethic from 5th grade had stuck with me. I was frustrated and confused because my tactic of coasting through school and completing work last minute had worked perfectly for my 5th-grade class. After ten missed assignments and two C-minuses on my English quizzes, my mother had enough. She stormed to my room and nailed the solution to success on my wall: a schedule. From that day on, the saying “I have nothing to do” never crossed my lips. Having a routine has vastly strengthened my time management skills, restored order to my sleep schedule, fixed my diet, reduced my stress levels, and changed my life completely.

Procrastination is hard to do when you have a schedule dictating most of your actions. In addition, the schedule can be tailored to include periods in which you can relax and have time to yourself. As reported by UC Santa Cruz in the article “Time Management and Procrastination” (2016), it helps to project yourself into the future by thinking about the emotions you will feel once you have completed all of your work. These future feelings of accomplishment will help motivate you to stop procrastinating. With this in mind, following my schedule, I grit my teeth and bunker down for some serious studying and quality work for 2½ hours, knowing that I could enjoy my free time without a guilty conscience as motivation. For those that find it difficult to even begin work, the research by Santa Cruz also suggests that breaking work into pieces ordered by difficulty helps individuals finish work. Students would then finish the easy work first, increasing in difficulty until they finish.

In addition, my sleep pattern was restored to its equilibrium of a healthy nine hours a day because of the schedule. I no longer experienced the laziness one feels when they have slept too long nor the trance one enters during the day when one sleeps too little. While most students don’t have set bedtimes, I realized that when I went to sleep at 12:30 on Monday, 10:20 on Tuesday, 11:34 on Wednesday, and 9:30 on Thursday, my performance during a test on Friday was affected negatively. According to “The Mediator Role of Routines on the Relationship between General Procrastination, Academic Procrastination and Perceived Importance of Sleep and Bedtime Procrastination” (2019), a study submitted to the National Library of Medicine, procrastination was associated with shorter sleep times and overall worse sleep quality. In addition, data support a relationship between poor sleep quality and excessive sleepiness with poor grades. In addition, the same study stated that a multitude of short-term problems can arise from a poor sleep pattern. These can include impaired memory and relationship stress. Even missing an hour and a half of sleep can have an impact on your alertness.

Many students say, “I don’t have enough time to eat breakfast,” which can be fixed by routine. While breakfast may seem like a chore for some people, there is plenty of evidence supporting that it is an important meal. The article “Breakfast“ (2020) by BetterHealthChannel describes breakfast as “the most important meal of the day” because it replenishes glucose and can lead to higher energy levels and short-term concentration. You won’t complain about how hungry you are before lunch because you took 15 minutes to eat some cereal or a piece of bread. Individuals that choose to skip breakfast usually eat lunch from around 11 a.m.-12 p.m. This means they have gone about 11-12 hours without food (assuming the average bedtime is 11 p.m.). In addition to less energy, people who skip breakfast will most likely fail to compensate for the nutrients and calories that they didn’t get.

Stress is more manageable with a routine because you know that sacrifices can be made for the greater good when the teachers join forces and give you three tests on the same day. While your “me time” will suffer, your grades will shine when you make the noble decision to spend more time studying. Routines also strengthen work ethic, as you are accustomed to completing work daily with (hopefully) little to no temptation of procrastination. After I created a routine, I am far more likely to complete all of my homework on time and find it much easier to keep up and even occasionally advance beyond the curriculum we are taught in school.