Wildcats Defeat Waukegan and Score Yet Another Win 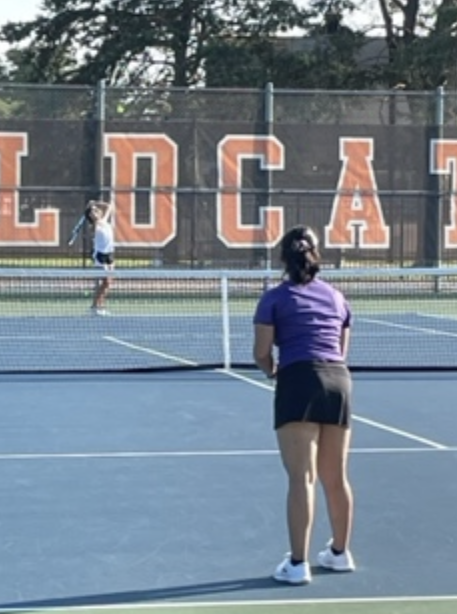 On Tuesday, Sep. 13, 2022, the Libertyville varsity girls’ tennis team competed against Waukegan at home. It was the perfect day for the team to take home yet another win after their previous game against Vernon Hills on Monday, Sep. 12. Sure enough, the Libertyville Wildcats won with a final score of 7 – 0.

Juniors Hadley Warren and Taya Breslow played doubles. The girls are currently number one for doubles on their team. “It was pretty smooth,” Warren said. “Kind of an easy match. Solid.” Warren had big goals for her team, and herself. “We hope to do well going forward with more conference matches,” said Warren. “We’re just gonna keep working hard and cross our fingers. We do well in sectionals and maybe make it to state. You never know.”

The two girls have both been playing for ten years. “I’ve been playing tennis since I was about six years old,” Warren said. Breslow has been playing since she was five years old.

When asked about the best part of her game during the match, Warren said, “Today, I’d say serves.” But Breslow said, “I’d say just having a good time on the court with my partner.”

Being a tennis player is certainly no simple feat. The athletes discussed some of the challenges they’ve been dealing with on the court. Warren said, “The mental game of tennis is tough. Trying to keep your cool on the court [is tough]. Especially playing doubles. You’re sharing the court with a partner from your own team and also with two other players.” Breslow added, “You don’t want to let them down.”

Coach Dan Kiernan felt that their previous win against Vernon Hills set them up for success for this conference match against Waukegan. “We had Vernon Hills yesterday and the girls played extremely well,” Kiernan said. “We beat Vernon Hills 7 – 0. So that was kind of a fun way to finish senior night. We had some good performances all over the doubles. Number one doubles played well. So yeah, tonight’s a little bit of an easier match. Yesterday was a good test for us as far as where we’re at.”

Kiernan felt his team had quite a number of strengths, but specifically, his singles players stood out. “Our number two singles was top 16 in the state,” Kiernan said.

Kiernan also expressed the importance of the team’s philosophy of everyone playing both singles and doubles. “[We have] a philosophy that you play both singles and doubles,” said Kiernan. “You don’t play one or the other. So we kind of prepare the girls to play all different singles or doubles, no matter what. But [the challenge] has been mainly trying to find some good doubles teams. Because most of our conferences are doubles.”

Kiernan has been coaching for 30 years and is entering his 15th season coaching tennis for LHS. Kiernan is a United States Professional Tennis Association certified teaching professional, as well as USPTA certified racket stringer. While playing for Johnsburg High School, Kiernan qualified for the IHSA State Finals Tournament three years in a row. Then, when playing for Illinois State University, Kiernan played as high as number one doubles for his team. Kiernan’s impressive achievements clearly show in his tennis team and their scores.

“I’m left-handed, so that gives me an advantage,” Olsen added. “My backhand is probably my favorite [part of my game].”  However, Olsen believes that her serving could be better.

The Libertyville varsity girls’ tennis team showcased their strengths in this match. Kiernan pointed out that for the last few years, he’s had “very strong girls’ teams”. The varsity girls’ tennis teams have even had players finish top 10 in the state – which is an amazing accomplishment. With an outstanding win on Sep. 12, the Sep. 13 match seemed like an easy win, and, sure enough, the girls took home a second win. The girls’ wins will only set them up for an amazing season. The next match takes place Thursday, Sep. 15, against the girls’ rivals, Lake Zurich. Will the girls take home yet another win?