Libertyville vs. Warren: a Tough Loss Eased By a Stellar Student Section 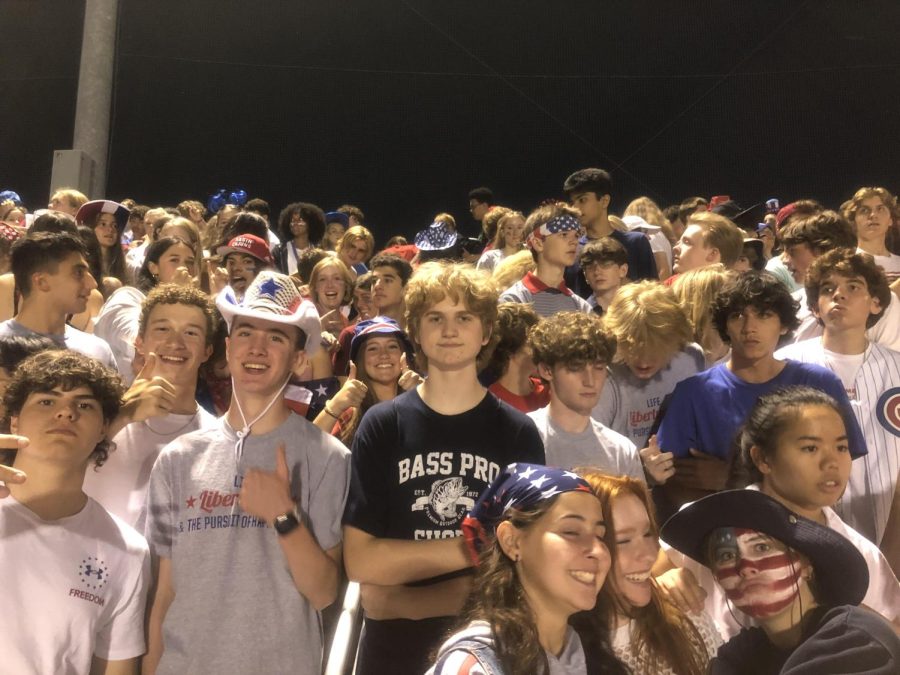 The stands are packed with loyal Libertyville fans, all in their best USA gear for the Friday night football game. For the second straight home game, the student section has been packed to capacity, and the trend shows no signs of letting up.

On Friday, Sept. 9, 2022, the Libertyville Wildcats took on the Warren Township Blue Devils, the #4-ranked team in the state, in an extraordinary showdown on the stadium field. Despite a hard-fought battle, the Wildcat effort fell short, with Warren besting the home team 42-8. However, over the course of the night, the glory of the game came not just from the hard work and tireless efforts of the players on the field, but from the raging and roaring Libertyville student section.

The Libertyville community had an exceptional turnout for this year’s first home game against Evanston. The Warren game was no different, and it was estimated by MaxPreps, a prominent high school sports reporting website, that there were over 1,000 people in attendance at the game. With the bleachers packed to the brim with endearing fans dressed in red, white and blue for the game’s theme of USA, it was certainly an exciting spectacle to watch, both on and off the field.

Right from the start of the first quarter, everyone could tell that it was going to be a tough game. The kickoff put the Wildcats at their 15-yard line, but the home team bravely surged forward, and over the course of several downs, relentlessly crossed yard after yard of distance, before finally relinquishing the ball to Warren at their 40-yard line. Warren quickly took advantage of the opportunity and scored their first touchdown of the night, but the student section held fast to their Wildcat pride. As the first quarter came to an end, the Wildcats provided a nail-biting finish to quarter one as they bravely held Warren at the 1-yard line, barring another touchdown.

One of the student section members in attendance was senior Milosh Dupor. Decked out in his best America-wear, Dupor spoke highly of and praised the fanatical student section present for the game against Warren. “Tonight’s been absolutely electric,” said Dupor. “We’re cheering, we’re chanting, we’re doing everything we can to help the team.” Dupor also commented on the team’s loss, but had only optimistic things to say about the future of the season. “We have to finish, we have to work hard, we have to battle, we have to fight, and you know, tough losses, sometimes it’s rough, sometimes it’s tough, but you just gotta keep going.” Dupor plans to continue supporting the team by attending as many home and away games as possible, with plans to make it to all future ones.

Another student with a much different story was junior Adam Joseph. Joseph previously played on the freshmen football team as a quarterback during the 2020-21 season, a season that was marked by the outbreak of the COVID-19 pandemic that shuttered schools and dissuaded large crowds from gathering. This night saw something much different than what had been witnessed during the COVID years. Joseph arrived after the start of the game following a work shift and attempted to enter, but was denied entry, because of the sheer volume of students already crowding the bleachers. Joseph said “I was told that it was overcrowded by multiple sources, including teachers.” For a student section to be packed is one thing, but for it to be at complete capacity to the point that students are not allowed in anymore is entirely another.

The second quarter was equally as grueling as the first, but still the Wildcats held on for dear life, and despite a minor scoring run, the #4-ranked team in the state had a mere 15-0 lead with five minutes left in the half. The Cats got the ball at the 35-yard line, and continued their steady pace of moving it downfield, this time making it all the way to the 48-yard line for another first down. Though a potential touchdown was halted by the state-ranked opponent’s defensive line, they proved that if they were to go down, they would go down fighting.

The student section was packed with loyal fans, including a proud crowd of seniors like Dupor. Another student present was senior Jack Griffin. Sporting an American flag draped over his shoulders, Griffin, like Dupor, spoke highly of the team, the game, and the student section. “I love the turnouts for the student section,” Griffin said. “Last week was great, and this week, same turnout. Everyone’s coming to the games. I appreciate everyone coming out, the atmosphere is great. I’m looking forward to next week.” Like Dupor, Griffin plans to attend as many future games as possible and continue his role as a proud Wildcat and a member of the student section.

As the third quarter dawned, it became clear that the Blue Devils were pulling away, and that the chances of a Wildcat victory were fading. Still, the fans and the team refused to be outdone. The Wildcats got their licks in and eventually made their way onto the board, ending the chances of a Blue Devil shutout. The final half of the game ultimately came to a close, the scoreboard confirming Warren’s win, 42-8. The Wildcats had lost, but morale still ran high, morale that shows the sheer resilience of the team, and the love of a loyal student section.