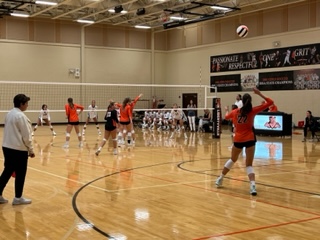 Senior Keira Kasten sets up for a powerful serve during the game against New Trier.

It began with a single serve, and ended with the Libertyville Wildcats sweeping the first two games of a three game series against their north shore rivals. On Monday, August 22, 2022, the Libertyville Wildcats’ varsity girls volleyball team bested the New Trier Trevians in a fierce competition that saw the home team emerge triumphant after two games of intense play.

The initial minutes of the first game saw a somewhat even and perhaps mundane match. The Trevians were the first to score, before the Wildcats quickly jumped onto the scoreboard to tie the game at one apiece. Wildcat fans crowding the bleachers were given a small concern when the Trevians quickly climbed to an early 4-2 lead, but the hometown heroes brought it back to tie the game again, this time at five each. This was where the Wildcats began to pull away, and the first game was all but in the bag for the home team.

Following intense effort from both sides, the Wildcats quickly took control of the game to make the score 15-8, and while the Trevians briefly mounted a comeback, more great serving and spiking, along with a tip over the net, gave the Wildcats a commanding lead of 18-9. Following back and forth possessions for both sides, a brief scoring run by New Trier, and finally, a tip over the net by junior Jaimie Marquardt, the Wildcats celebrated an early, first game victory over their north shore opponents.

Truly, it was great play by the varsity team’s roster that made this such a tough game for the Trevians, and a great game to watch for Libertyville fans.

Senior Keira Kasten, who recently committed to Elon University, a school in North Carolina known for its stellar Division One volleyball program, had a very positive outlook on her teammates and their play as a whole, citing such examples as a crucial block by Lily Evans as highlights of the game. When asked how it felt to beat New Trier in the opening game of the season, Kasten spoke highly of the team that she played a key role for throughout the game. “Honestly, it felt really great, especially since it’s our first game,” Kasten said. “I think it’s going to set a great tone for the season and honestly, it got us really pumped.”

Despite excitement and adrenaline flooding the west gym, the Wildcats knew that they weren’t done just yet. Two games would be needed to best New Trier in the three-game series, and so, this second game was of the utmost importance. The game started remarkably similar to its predecessor, with a brief tie and an early Trevians lead, a lead which the Wildcats began to slowly chip away at, tying up the second game at eight, and once again pulling away, approaching the crucial mark of twenty-five points needed to win.

With a Wildcat roar of pride emanating from the bleachers and a phenomenal roster of steel-willed players, the Wildcats established themselves as a powerhouse team when they pulled away a second time, halted any potential New Trier comebacks, and won the second game, to ensure that game three was not even a possibility. The Wildcats had done it: they had won.

Junior Hannah Fleming spoke highly of the team that she plays for, a team for which she is starting her second season on varsity. Fleming complimented the team’s performance throughout the game, while also establishing a clear set of goals for the Wildcats as they progress further into the season, saying that she believes they can work on “just closing out.” Fleming added that, for example “in the first set, we let them go on a two or three point run.” When asked what goals she has for the team as a whole this season, Fleming said that she has a goal of “just finding more open spots or trying different things.”

The Wildcat victory over the New Trier Trevians marked a pivotal and important moment in the season. It showed that the Wildcats have what it takes to overcome an adversary, and win with extraordinary grace and confidence. Certainly a powerhouse team this year, and boosted by moral support, one might call them a force to be reckoned with on the court.