Wildcats Defeat Warren in Their Tenth Match of the Season 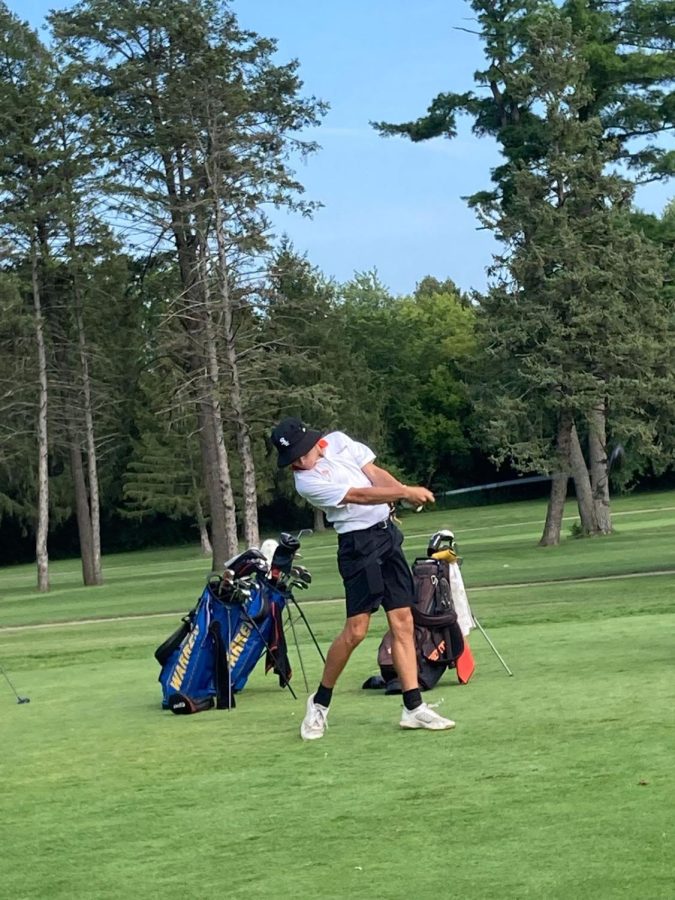 On Wednesday, Aug. 24, 2022, the Libertyville varsity boys golf team competed against Warren Township at Pine Meadow Golf Course in Mundelein. It was a warm afternoon with just a little breeze – perfect conditions for an exciting contest between the two conference rivals. The match was very close, with Libertyville taking home the victory, 156 – 159. Senior Wyatt Sorensen achieved the top score of 37, just one over par. Seniors Matthew Huennekens and Leo Scopacasa were close behind with a score of 39 each.

Head Coach Sean Matthews is grateful for the depth of experience on the team that helped them bring home the win. “We’ve got five seniors on the team,” Matthews said.“So, most of these guys have played with me. This is their fourth year of playing. I would say that’s our strength. We’ve had these guys for four years in our program, and they’ve been very strong, so that is definitely a strength. They’ve all been playing for four years and some have been playing even longer when they were in grade school.”

The team is made up of several classes. “We have five seniors, two juniors, one sophomore and no freshmen,” Matthews said.

Senior Aleks Slesers has been playing golf for a long time. “I started when I was two years old,” Slesers said. “I was born into a golf family. So basically I’ve been playing ever since.”

Touching on what the best part of his game was, Slesers noted, “I played pretty well off the tee and was pretty smart with where I was hitting the ball. I left myself some easy iron shots.”

A pivotal moment for Slesers was “just staying consistent with my game.”

Reflecting on the match, sophomore Ryan Andrews said, “Today my driving was easily the best part of my game and I was also putting myself in the fairway. I think I missed one or two today. And that really helped me with irons into the green.”

Sharing one word that described how he played, Andrews said, “I would say consistent. I didn’t have very many doubles or triples. I kind of stayed with the bogey and par train which is how I like to play.”

Andrews strengths are “hitting the ball longer, very long off the tee and especially with my irons. Today I’d say one of my strengths is also my putting. I feel like I putted pretty well and I haven’t been doing that lately. So, that was pretty good to start with.”

Andrews challenges are “being more consistent with my game, especially with irons and chipping. So those are definitely the two categories I need to work on the most.”

The boy’s varsity golf team showcased their strengths and worked to overcome their challenges to take home the win against Warren Township. Having many of the players a part of the team for four years was a major strength of theirs, as Matthews pointed out. The team stayed consistent, strong, and never gave up when challenges arose helping them bring home the thrilling win against Warren Township. The team now stands at a record of 8-2. Things seem to be lining up for a strong season. The next match is Sept. 1, 2022 against Waukegan High School.