The Battle of Route 176: Wildcats Emerge Victorious In Carmel Game 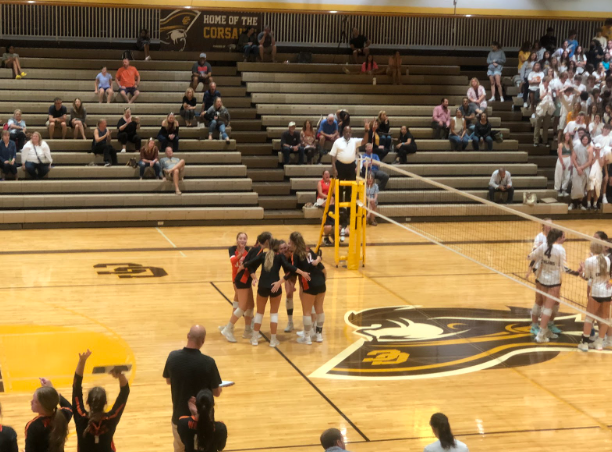 As spectators look on, the team huddles together in celebration following a point scored against the Carmel Corsairs.

The Libertyville/Carmel Catholic rivalry is certainly an intense one: one private and one public, both schools are situated on Route 176, less than two miles apart from each other. On August 30, 2022, the Libertyville Wildcats emerged as a clear winner in their girls varsity volleyball game, following an intense crosstown competition against their private school rivals.

Similar to an earlier game this season played against the New Trier Trevians, the Wildcats swept the series, winning the first two games needed to win, and barring the event of a third altogether. Carmel Catholic is a school that has triumphed in volleyball in the past, so nobody knew what quite to expect in that gym, but as the first game progressed, the Wildcats fought tooth and claw to establish themselves as clear favorites. Carmel’s first serve was over the line, giving Libertyville an easy point, to put them on the board first. After that, successful serving by junior Hannah Fleming, and a tip over the net by Keira Kasten, who recently announced her commitment to play Division One volleyball for Elon University in North Carolina, the Wildcats found themselves looking at a lead of four, which quickly jumped to a lead of five.

It was here that the Corsairs refused the idea of a shutout. Carmel’s team fought with everything they had to bring the score up to 6-3, but once again, armed with a powerhouse team of upperclassmen and support from the bleachers, the Wildcats pulled away, jumping from a 9-4 lead, before climbing to a 14-7 lead. There they continued their scoring run, allowing few opportunities for Carmel to interject, and by the time Kasten stepped up to serve for the Wildcats, the scoreboard read 22-12, in favor of the Wildcats. Two of Kasten’s serves landed, before the third ended in a point for the Corsairs. With one point standing between them and victory, the Wildcats gave it everything they had to win the first game, with a final score of 25-13.

A highlight of the game outside of outstanding plays and team morale was the fans in attendance. As always, the student section arrived in force, and provided more than enough energy for the Wildcats to fuel their win. Athletic Director John Woods spoke very highly of the students in attendance, and acknowledged that their actions certainly had a role in keeping team spirit high and giving the Wildcats the win. “It’s so much fun to watch the kids compete,” Said Woods. “We had a great crowd full of energy, and I don’t know if our students’ actions fed off of the team or if the team fed off of them.”

Despite their hard-earned success in the first game, the Wildcats didn’t have time to celebrate just yet. They still needed one more win to take home the crown. Carmel played relentlessly throughout the second game, and kept the score tight all the way. A frightening moment came when the Wildcats were up 4-2, and starting junior Lily Evans was injured. With the sudden and unexpected loss of a player, the Wildcats had to make a snap decision: play out of panic and desperation, or keep it together and win for Evans. They chose to win for Evans, and jumped to a large lead of 11-7. The Corsairs gave it everything they had, and came back to 14-11, Wildcats, but the visiting team kept it together, and by the time the team reached a score of 22-16, the second game was in the bag for the Wildcats.

The team’s rallying around Evans showed a new level of Wildcat spirit, and it was noted that she too had a hand in the win. Senior Macy Schaffnit, who has been with the school’s volleyball program for all four years of high school, spoke about Evans’ injury and subsequent removal from the game. “I think when she got hurt, we just realized that we really needed to push and fight just for her, to show her that we can push on after she got hurt,” Schaffnit said.
One person especially pleased with the hard-won victory was Head Coach Greg Loika. Loika, who has been the head coach since 2009, was very proud of the way his team played. “I thought we did a good job today, especially as we needed to change our lineup a little bit there,” Loika said.

The Wildcats showed once again that they are a force to be reckoned with. But more than that, they presented a unified front, a fortified tower in the face of adversity, and determined enough to win the Battle of Route 176.