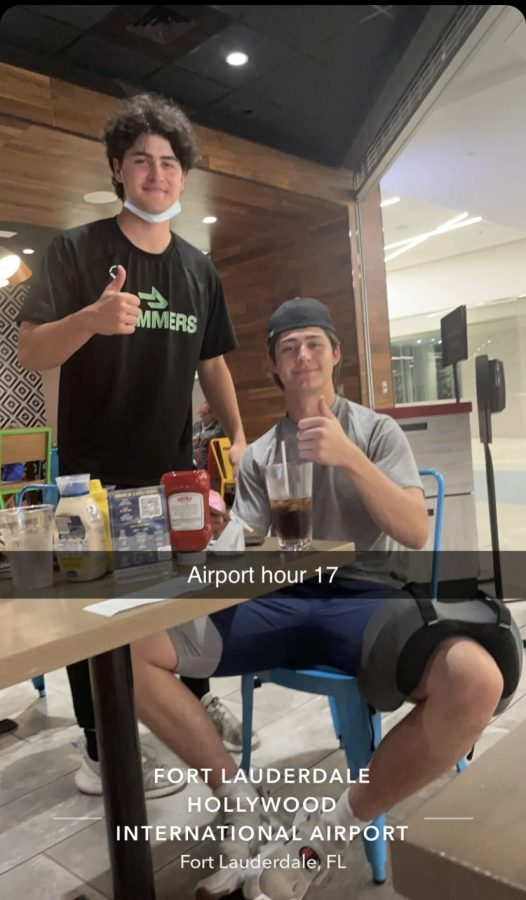 Seniors Connor Walters and Michael Addari smile through the struggle of 40 hours at an airport.

“We got picked up at 5:30 am on Friday,” senior baseball player Connor Walters said. “The original plan was to take off at 8 am from Orlando, then catch a connecting flight in Fort Lauderdale at 9:30 to head back to Chicago.”

Walters and the rest of the LHS baseball team had no idea what they were in for when they arrived at the airport that morning. They would not arrive at home until 10 pm on Saturday, nearly 40 hours later.

The team had spent the week in Orlando at a baseball tournament, which Walters said was “amazing. Everybody had a really good time. It was so much fun. I would 100% do it again.” He and his teammates had quite the opposite things to say about their trip home.

Everything went smoothly in Orlando all the way through boarding, but the trouble began with the weather in Fort Lauderdale.

“We’re on the plane and they’re starting to do the water landing procedure and all that kind of stuff,” said senior Jack Glasgow, one of Walters’ teammates.  “And then they told us we couldn’t take off because there was a pause at the Fort Lauderdale Airport because of the rain.”

The team was told to exit the plane and were given a new takeoff time of 11:30 am, giving them a three and a half hour delay.

“When we got back to the plane at 11:30, they canceled the flight because too much time had passed,” Glasgow said.

“We unloaded everything off the plane and after camping out in the airport for two more hours, we got a new flight to Fort Lauderdale at 1:30,” Walters explained. “For that flight we got right there, no delays or anything. But when we touched down in Fort Lauderdale, our connecting flight to Chicago had already taken off.”

Without a boarding pass to get back into the terminal, the team was forced to wait in the baggage claim until they could find a new connection.

“We sat at the baggage claim for the Fort Lauderdale Airport for four hours while our coach looked for a flight home for us,” Glasgow commented. “All we had access to was a really bad Starbucks and the airport was so hot.”

The parents of some players learned of the delays and bought individual tickets for their sons to fly home. However, for the majority of the team that stayed together, the new destination was booked: a 9:30 pm flight to Austin, Texas.

“We got back through security in Fort Lauderdale at about 8 pm,” Walters recalled. “But all the restaurants were closed and the neck pillows we tried to buy were like 60 dollars.”

And because at this point it would have been surprising if the flight took off on time, their pilots got caught up in customs, so the plane to Austin didn’t take off until 11:30 pm.  This marked 7.5 hours in the Orlando Airport and 9.5 hours in the Fort Lauderdale Airport for the team on Friday.

“To make things even worse, right after we lift off the pilot says ‘Yo you guys might smell a burning smell in the cabin. Don’t be alarmed but it is because there is a giant wildfire to our left,’” Walters said. “Everyone looked out the windows and it looked cool, but the cabin was hot and smelled like smoke.”

The team landed in Austin at around 2 am and booked hotel rooms for the night while their parents and coaches searched for flights in the morning. From Austin, they ended up taking three paths. A third of the team was fortunate enough to receive flights to Chicago from Austin on Saturday morning. The other two groups were separated and sent to either Oklahoma City, Oklahoma or Denver, Colorado.

“Walters and I were on the OKC route,” Glasgow said. “It didn’t have any delays and we made it there just in time.”

The OKC group had a clean day on Saturday, with two flights and a brief layover that got them home around 10 pm. Some members of the Denver group had to take yet another layover in Saint Louis, but everyone arrived home safe and sound by Sunday morning.

Reflecting on the experience, Walters said, “once it got to like the last bit, nobody was even surprised when things were going wrong. Everybody was just used to it at that point. I was half expecting my bag to just not show up at home.”

“Once a few days passed, people started focusing more on the actual trip on how fun it was when we were in Florida,” Glasgow concluded. “But it definitely took a couple of days for it to be a funny story.”

“And if anybody mentioned Southwest Airlines they were getting a dirty look,” Walters remarked with a smile.