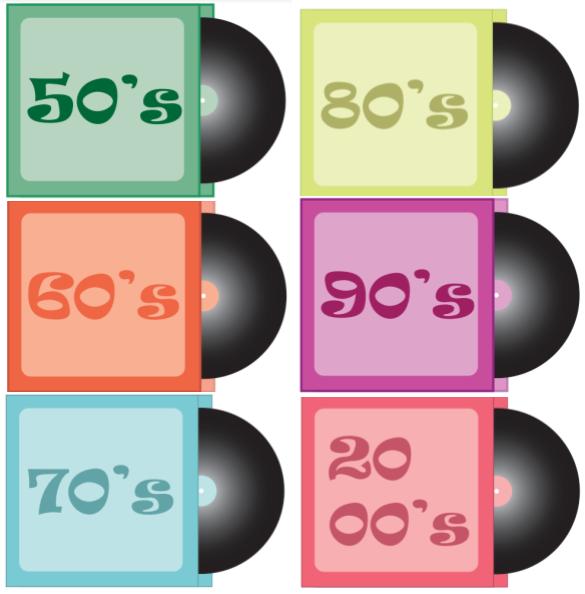 Rock and roll was born! It combined rhythm and blues, pop, blues, and hillbilly to create the raw music style known today. Elvis Presley, the king of rock and roll, as well as Chuck Berry and Fats Domino, were the original rock and roll musicians.

While rock and roll maintained its popularity with the four lads from Liverpool, the Beatles, other genres including pop, folk music, and jazz, captivated the populace . Folk music was rejuvenated, featuring Bob Dylan and Joan Baez. Although folk music did not stay the same, this style shifted toward commenting on current events, like the Vietnam war and the Civil Rights movement. Jazz music featured artists like Louis Armstrong and Ella Fitzgerald. However, the style was shifted by trumpeter Miles Davis.

With the 70s came the end of the Vietnam war and the end of the classic phase of the Civil Rights movement which set new goals and priorities. These tranquil times led to a more relaxing musical atmosphere – disco. Disco music led to the famous bands The Bee Gees and K.C. and the Sunshine Band which were many of the incredibly popular bands known for their disco style.

MTV, a 24/7 music channel, for music videos arose, dominating TV. New wave, hip hop, and hair  metal all arose  as well as the beloved pop music that we know and love today. Madonna, Prince, and Michael and Janet Jackson paved the way for pop culture. Musicians such as LL Cool J. and the infamous band, the Beastie Boys were some of the top tier artists within the hip hop genre of the 80s. New Wave was  the birth child of a culmination of genres such as, punk  rock, reggae, funk, synth pop, art rock, and mainstream pop. The New Wave genre featured bands like the Bangles and the Police. Hair metal, a subgenre of heavy metal, also known as glam metal, featured artists like Van Halen, Metallica, and Def Leppard.

The turn of the century! While the 90s still had a variety of genres, one newer genre was known as “techno” or dance/house music. Bands like C+C Music Factory and Technotronic were known for lighting up the dance floor with popular hits like “Pump Up the Jam” by Technotronic as well as the famous song “Gonna Make You Sweat (Everybody Dance Now)” by C+C Music Factory. EDM was also created in the 90s with bands like The Prodigy and The Chemical Brothers. The 90s remained consistent with the everlasting alternative rock genre, featuring bands like Nirvana and Smashing Pumpkins. Madonna stayed prevalent in the 90s as well within her Pop genre, as well as Mariah Carey coming up in the genre. The 90s was also regarded as the “Golden Era of Hip Hop”, featuring hip tunes from Dr. Dre and Snoop Dogg.

By the 2000s, hip-hop and rap music overtook mainstream music, featuring artists from Usher to Eminem. Using the overall popularity of rap, artists such as Kid Rock became famous through a subgenre of rap, known as rock metal rap. Through the mainstreaming of hip-hop now too, we see pop gaining more and more traction as well, leading to the creation of the well-known TV show, American Idol.