The Libertyville Girls Varsity Softball team defeated Crystal Lake in a close call game of 8 - 5, scores from both sides lead to a nail-biting match for Libertyville High School. 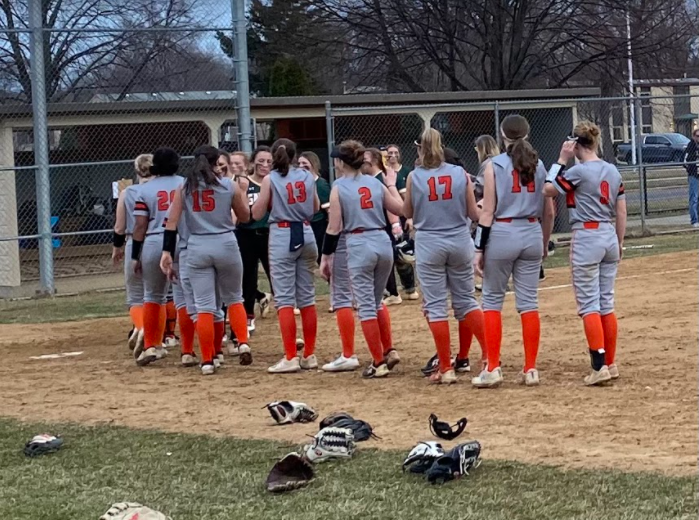 Starting off the game with a 1-0 lead, junior Finnely Olson (#2) worked fast on the pitching mound to strike out the first batter, and called it close on the third strikeout with a full count at the top of the inning.

At the bottom of the inning, freshman Adriana Callahan (#13) scored the first of many runs to come with a hit to left field that sent her all the way to third base, and then stole home on the next play.

During the second inning, Crystal Lake started out with a pop up to shortstop, pop up to first base, and a ground out to Olson on the pitching mound.

LHS followed the easy outs with outs of their own with a ground out to first, and a pop fly off the first base line that was caught.

Junior Anna Mitchell (#5) got on base but was ruled out when she stole home, ending the inning with LHS still leading 1-0.

Crystal Lake started out with a line drive to find, then stole second on the next play.  A Gator then hit a pop fly to center field which was caught, sending her out

For the final out of the inning, second baseman Ariana Callahan (#13) scooped up a ground ball and with a throw to first baseman freshman Zoe Kinsella (#14). This ended the  inning with a double play.

Libertyville started the bottom of the third with a pop-up out to shortstop from junior Samatha Whisenand (#9).  Followed by a walk, then with a full count on the board, senior Clara Benavides (#4) was walked as well.

A powerful hit from freshman Zoe Kinsella (#14) sent the ball all the way to the fence but was ruled a foul, and returning to the plate, she sent a pop-fly to first leading to a bases loaded situation, with two outs.

Anna Mitchell (#5) ended the inning with a ground out to third, unfortunately ending the third inning with no runs scored.

Starting out at the top of the fourth inning, Finnley Olsen still on the mound, the first out was a tag out followed by ground out from freshman shortstop Adriana Callahan (#13) to first baseman freshman Zoe Kinsella (#14).

Two more batters were walked until #5 for the Crystal Lake Gators struck out swinging, no runs having been scored for Crystal Lake.

At the bottom of the inning Crystal Lake changed pitchers leading to a walk to start out, followed by a line drive to center field from junior Finnely Olson (#2).

With the bases loaded, senior Clara Benavides (#4) struck out, followed by a ground out to third base from freshman Zoe Kinsella (#14).

With two outs on the board a pop fly to centerfield from Samantha Whisenand (#9) ended the inning leaving LHS in the lead with a 2 – 0 score over Crystal Lake.

Despite Crystal Lake’s current predicament, they came back swinging with two attempted bunts before finally being struck out followed by a ground out to shortstop.

Number eight on the Gators stole second and third before freshman Adriana Callahan on the mound walked a second batter.

Following the walk, number 10 for the Crystal Lake Gator’s hit a line drive between first and second base to earn two points for the visiting team leaving the score 4 – 2, LHS still in the lead.

A ground out, then strikeout swinging closed the top of the fifth inning.

Junior Anna Mitchell (#5) started the LHS line up with a deep ball between center and right field, then stole second.  A close call, but she was ruled safe by the umpire.

Sara Johnson (#19) followed Mitchell at the plate with a ground ball to third, rounding the base and reaching second due to a fumble by the third baseman.

Johnson’s hit allowed Mitchell to score, pushing LHS further in the lead with a count of 5 – 2.

With one out, senior Campbell Clarkson hit a line drive to third base but was out when stealing third base on the next play.  Junior Samantha Whisenand ended the inning with a pop out to center field.

With a score of 5 – 2, LHS still in the lead, the sixth inning began with freshman Adriana Callahan (#13) on the mound, striking out the first Crystal Lake batter swinging.

Number 13 for Crystal Lake got a hit to right field and stole second, only for Callahan to strikeout the next batter for the Gators looking.

With two outs, Crystal Lake bunted but the catcher for LHS scooped it up and threw to first base, ending the top of the sixth inning.

Starting out strong, Callahan began the bottom of the sixth with a line drive to right field, reaching second base on her run.

Taking the first out of the inning for LHS, senior Clara Benavidas (#4) followed up with a pop up to first base but her ball was caught.

Junior Peyton Murphy (#15) followed Benavides with a strong hit to far center field but her ball was also caught by Crystal Lake.

Freshman Makayla Boone (#20) landed her ball in the pocket between right and center field and made her way to second.  Stealing home a play later when a ball missed the catcher and hit the back wall.

Junior Jeanette Jenkinson (#3) was walked followed by a pop out from junior Sara Johnson (#19) leaving LHS with a score of 8 – 2 in the bottom of the sixth.

To wrap up the game, freshman Adriana Callahan was placed on the mound.

Crystal Lake started out with a grounder to second base, and by a close call, was safe.

The second batter advanced the first with a ball that barely squeezed through the gap between second and third base.

With runners on first and second Callahan walked the third batter, leaving all bases loaded.  On the next play, a Crystal Lake batter stole home, making the score 8 – 3 with LHS in the lead.

Callahan walked the next runner, but followed up with a pop out to junior Payton Murphy (#15) who made the out with a running catch.

The run was batted in and the game was called due to a time limit constraint.

The girl’s Libertyville High School varsity team won with a final score of 8 – 5, with many tense plays in the middle, and a final win over Crystal Lake in the end.