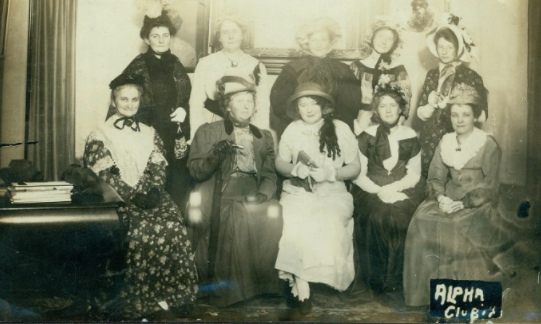 Women of The Alpha Club (later known as The Libertyville Women’s Club) was a group of women responsible for the creation of a lending library (the forerunner of Cook Memorial Library), which was a place for free-thinking women to discuss issues of the day. The Alpha Club Library was located on West Cook Street.

In the last century to now, women have risen from being perceived as weak, subservient, and docile to having become prominent officials that contributed to both the Libertyville community and achieved milestones, which advanced women’s standing in society and reinvigorated the world as a whole. When little girls had the dream to hold office, they were laughed at and ridiculed, being seen as incapable of meaningfully impacting society outside of domestic roles. It was considered off limits back then for women to even put on a business suit, but now women can pursue any career path of their choosing.  Come election time, the dream of voting rights for women was out of reach, dare women even think of doing so.

Nevertheless, women wouldn’t take no for an answer and women shortly thereafter received the right to vote in Illinois, with limitations in 1913 and by way of the 19th Amendment of the U.S. Constitution in 1920. Having turned the notion of limited opportunities into limitless opportunities, influential figures that made such advancements possible resided within our very own Libertyville community.

Every year, March is designated as Women’s History Month, which is meant to commemorate the contributions that women made over the years and to encourage the study, observance and celebration of the vital role of women in American history.

In order to celebrate Women’s History Month within our community, we must acknowledge the contributions of women to build the very foundation of Libertyville. Therefore, it is crucial to pay tribute to some of the women in our community that were instrumental in advocating for Women’s Rights.

Jennifer Barry, who was born & raised in Libertyville and graduated from Libertyville High School in 1988, has been a Local History Librarian at Cook Memorial Library for 9 ½ years. Jennifer has been on the board of the Libertyville Historical Society for 10 years and served as president since 2015. Barry spoke about  the history of Clara Averill Colby, a woman who lived during the time 1878 to 1962. She was an advocate for women’s rights and in July 1913, Libertyville resident Clara Colby became the first woman to legally vote in the state of Illinois. According to Barry, “Only 57 of the possible 400 Libertyville women eligible to vote did so. As seen by Clara Colby and the other women we know voted that day, the women of Libertyville were very involved in their communities and should be acknowledged for their contributions.”

Barry explained, “Voting took place at the Town Hall which is today’s American Legion Hall.” The voting election was for a bond issue to build a new village hall, which successfully passed. (Cited: http://www.idaillinois.org/digital/collection/cookmemo11/id/1308/rec/3 ) Taking the first step to vote was important not just for her, but it symbolized a victory for women everywhere. According to Barry, “On the day of the election she [Clara] was quoted in the newspaper, ‘Do go and vote. I don’t care if you vote in favor of the new hall or against. Just go to the polls and show the men that you are interested enough in the ballot to use it….there are plenty of women who do take interest and they are going to give this town a thorough awakening.’ ”

Throughout history and in present times, women have fought with determination and courage to reshape the world for the better.  Women have struggled to get ahead, but ultimately pulled through, striving to achieve what was never thought possible, whether it be the right to have independence, let alone rise up through the ranks and make advancements to society. Even now, women within Libertyville and around the world face ongoing adversity, but innovation, power and improvement are within reach. Women have overcome setback upon setback in order to contribute to the community and reveal a brighter future. If everyone keeps forging ahead on this path, the glass ceiling that was put in place to limit women’s opportunities will be demolished, forever rendered a thing of the past in the process of paving the way for civilization’s future.

Dr. Denise Herrmann, who is the first female superintendent of District 128, currently serves in this role as of July 1, 2021.

Laura Zeng was raised in Libertyville and attended Libertyville High School. She is an olympic champion having participated as a rhythmic gymnast and medalist for the U.S. Olympic team.

Maureen Herman is a writer and a musician. She was the bassist for the Minneapolis-based band Babes in Toyland. She was raised in Libertyville and attended Libertyville High School. She worked on the high school paper Drops of Ink.

Phillipa Soo is an actress in theater, film and television. She is best known for the role of Eliza Hamilton in the Broadway musical Hamilton. She was born in Libertyville and attended Libertyville High School from 2004 to 2008.

Mary Morello, is an American activist who was involved in the Civil Rights Movement and the NAACP. She moved to Libertyville in 1965 where she taught social studies and US History at Libertyville High School.

Dr. Norma Munson, was born 1923 in Iowa and came to Libertyville in 1955. She was a Biology & Chemistry teacher at Libertyville High School from 1955 through 1979, taking breaks within that timeframe to further her studies and education. She was instrumental in the development of the AP Biology course and included a great deal of individual research in her classes. She held students to a high sta...

Jo Ann Eckmann served two-terms as the first woman mayor in Libertyville from 1989-1997. She was originally from Buffalo, NY and came to Libertyville in 1977/1978 with her husband. She served as secretary and treasurer of Eckmann Associates. She joined the League of Women Voters and served on the board for the David Adler Center. She was active on local issues in the community, developed the downto...

Hattie Boehm was a lifelong Libertyville resident, born in 1896, and was the first woman appointed to the Libertyville Village Office where she served for 43 years as the Village’s Treasurer. Prior to that position, she worked in the Statistical Department serving as an audit clerk for what is today known as the North Shore Railroad Line. She left this position with the Railroad to work with her b...

Dr. Getta Sweeting was a woman doctor in Libertyville, who ran her own Sanitarium for the treatment of epilepsy and other mental and nervous sufferers within the time period of 1911 to 1918 from what town records indicate. In 1911, she purchased several acres of land in Libertyville, which would pinpoint the location to be across the street from where Winchester House once stood, and built a farmhou...

Clara May Averill was born on March 18, 1878 in Milwaukee, Wisconsin to Charles and Laura Rogers Averill. (more specific citing: https://ancestors.familysearch.org/ ). Averill lived with her parents, who came to Libertyville in 1887. She graduated from the Chicago College of Music and Education, which was unusual at the time for women to pursue college degrees. She taught in Libertyville schools and for ...

Julia Cameron, is a writer and artist, most famous for her book The Artist's Way. She has written many other books, short stories, and essays, as well as novels, plays, musicals, and screenplays. She was married to a famous film director, producer, and screenwriter, named Martin Scorsese. ...

Marietta DePrima, is an actress, best known for playing the role Sally Rogers on the ABC/UPN sitcom, The Hughleys. She is a graduate of Saint Joseph Elementary School in Libertyville.

Donna Johnson, was elected in 2021 as the first African American mayor of Libertyville.

Rebecca A. Jenkins is District 70’s new superintendent of schools, effective April 1, 2022. She will be the first female superintendent to lead the school district, consisting of 2,129 students.

Gwynne Shotwell is a businesswoman, engineer and is the president and chief operating officer of SpaceX, an American space transportation company. She was raised in Libertyville and graduated from Libertyville High School in 1982.