Masks do not define my political affiliation 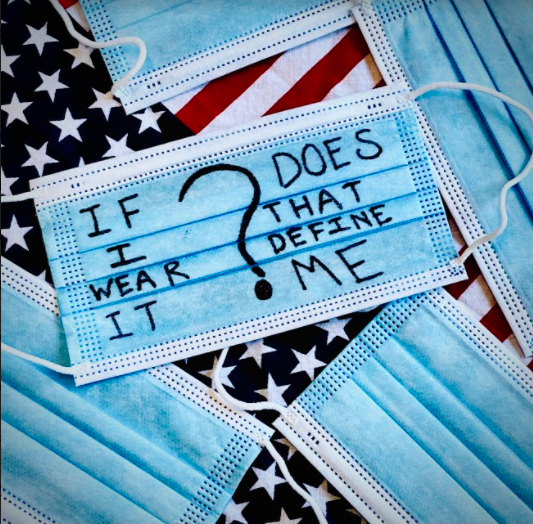 Since March 2020, a piece of cloth has polarized local communities, countries and international relations.

The decision to wear a mask or not has torn relationships and friendships apart, but what does wearing or not wearing the piece of cloth really represent? Protection for oneself or others against a deadly disease? Or a political statement?

There has been conflict surrounding mask mandates in the Libertyville community, as well as at LHS. Because of this, I have witnessed and experienced various different types of political assumptions based on the choice to wear or not wear a mask.

To some, wearing a mask is a statement of valuing their own, or others health. To others, mask mandates were an infringement on personal freedoms. Some people wore a mask simply because they wanted to follow the rules, and weren’t trying to make any statement by wearing a mask.

These are personal decisions, and shouldn’t be perceived as an exemplary clue into what political party someone belongs to.

Those who chose to not wear a mask during peaks of the pandemic, when there was a mandate, could have been making a political statement. But it seems different for those who don’t wear a mask after the mandate has been lifted.

A large reason why the choice to wear a mask has become politicized is because of large figureheads at the front of national politics.

The same could be said for Democrats. President Biden was vehemently pro-masks during his campaign as well as for the majority of his first year in office. This could have influenced some Democrats willingness to continue to follow the mask mandate.

Regardless, wearing a mask is not and should not be an indication of someone’s political affiliation.

On the first day the mask mandate was lifted, a classmate of mine chose to not wear his mask. Barely into the school day, he was approached by another student who was wearing a mask, and said to him: “I didn’t know you were a Republican.”

The student directly correlated him not wearing a mask with being a Republican, and this shouldn’t be the case.

This goes beyond politics and extends into drawing conclusions about people’s character or intelligence, and ability to think for themselves . Walking into school during the mask protest, I heard countless adults screaming at me, as well as other students, to “take the filthy masks off” and calling us “sheep.”

Being a Republican or Democrat is not a bad thing, and presenting yourself as such isn’t either. However, assuming someone is one or the other based on their choice on if they wear a mask or not could be harmful.

It’s human nature to assume things about others, or strangers based on what they look like or what they are wearing. But to then verbalize assumptions about someone based on their personal choice is unfair.

As a senior in high school, being freshly 18 years old, I am still figuring out my own political views. Political views are supposed to change over time, as you gain more life experiences and become older and more mature.

I feel it is extremely dangerous to pigeon hole young adults into a political party, based on their choice to wear a mask or not, when many others (including myself) aren’t sure of where they stand politically yet.

Fellow classmates, as well as myself, have felt peer pressured and scared on the decision to wear or not wear a mask, simply because of the fear of being assumed to be one political party or the other.

As the future generation of voters, it is our responsibility to grab control of the polarization of politics that is happening right now, as well as learning how to manage hot button topics in a respectful manner.

We are the future of the United States, and in order to age in a political climate of respect and dignity, we need to understand now that people will have different perspectives on things, political or not, and that is ok.