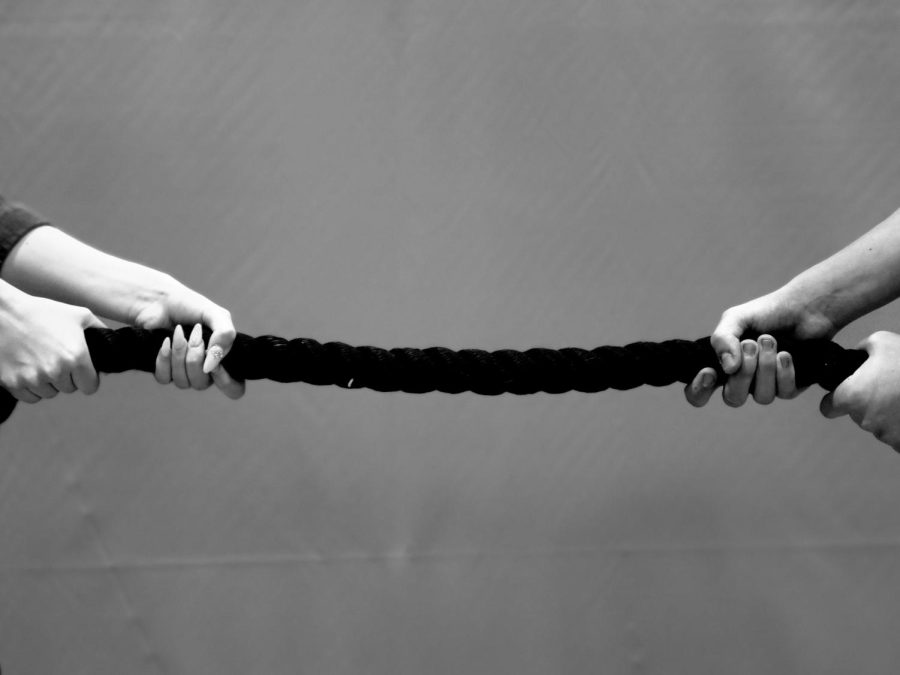 Finding a middle ground in small issues, such as finding a place to have lunch with friends, is something we do on a daily basis. However, compromises for bigger issues are harder to achieve due simply to the passion and the multitude of preferences expressed within the issue.

Note: This piece is a staff editorial, which is an opinion article meant to reflect the opinions of the Drops of Ink staff. Because of this, the author’s name does not appear alongside the story, as the opinions shared in here are based on class discussions about the topic among the 20 DOI staff members. The staff is composed of students of all grades from a variety of backgrounds and experiences; therefore, the editorial speaks to the publication’s view on a subject and is not representative of each staff member’s exact view on the issue at hand.

In today’s polarizing political climate, the possibility of compromise has often been brought up as a solution to a variety of divisive issues, especially COVID-19, climate change and other politicized issues.

However, many people see compromise merely as persuading someone else onto your side, but there’s much more to it. There needs to be a give and take in a compromise, with each individual willing to make concessions for the purposes of coming to an agreement.

Mutual respect is an essential part of a compromise. If the two sides in the issue don’t respect each other, they’ll be unwilling to listen, and therefore unwilling to lose anything they want.

It may seem tough to give up what you want, but in reality, we do it almost every day. If your friend wants to get lunch at Chipotle and you want to go to Culver’s, you might say that you could go to Chipotle today and Culver’s tomorrow. That’s a compromise.

We should try to focus on the little compromises we make, and see how the outcomes of those affect you positively. With political polarization, we often find ourselves asking if compromise is really worth it, without realizing just how often we make compromises.

If we gave up on the concept of compromise, we could never get anything done on any level. If you and your friend don’t compromise on where to go to lunch, you wouldn’t be able to get lunch with them unless you agree exactly.

While choosing a place to eat may seem like a small issue, the same ideas can be applied on a much larger scale. When passing any law, there has to be a compromise. Some representatives may not want a certain clause in a bill, so to get them to vote in favor of it the sponsor of the bill may remove that clause.

In history, we tend to focus on when compromise doesn’t work, as opposed to when it did. Most wars fought can be broken down into a failed, or unattempted, compromise.

However, it is much more difficult to successfully compromise on bigger issues, since people are so much more passionate. You may not have a strong preference on where you and your friend go to lunch, but you’re far more likely to have strong views on political issues.

Both sides can be equally as passionate as one another in most political issues, but it’s tough for each side to realize that. When arguing, we find ourselves getting so caught up in our side of the argument that we don’t even listen to the other side; instead just finding ways to knock down what they’re saying.

The mutual respect needed to successfully compromise is lost when we don’t actually listen to the other side. With some exceptions, the goal of discussions on issues should be to find a compromise, not just knock down the other person.

If we just refute instead of listen, we become even more set in our beliefs, and far less likely to actually compromise. Instead of accepting that someone may have different views, we dismiss them as wrong and see everything they say as a means to attack them, as opposed to looking at the commonalities.

There’s a fine line between maintaining values as an individual and being willing to compromise on political issues. Of course, we all have certain views on the world around us or morality that we feel are too important to compromise, which is okay, but we also need to understand that there are issues where compromise is available, and we should seek one.

Most issues now, like masks, the environment, and equal rights, have become divided along political party lines which can be incredibly harmful. If people only focus on party alliance, they’re far less likely to look at the other side, even if their values align with certain issues of the other party.

This division creates an us vs. them mentality lacking any mutual respect for the other side of the argument, which makes compromise seem impossible.

In the end, striving for a compromise is worth it. It allows for a more successful world where more people are satisfied with the world around them. Even if we don’t get everything exactly as we want it, we still get something, and the world would be better for it.