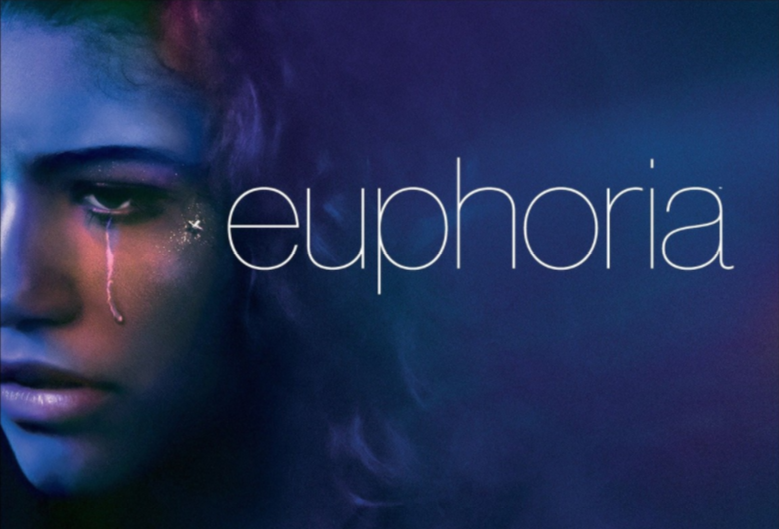 Euphoria is a breathtaking depiction of the high school experience, but completely different from the shows we’ve grown up with. For the first time, we see the exploration of themes such as drug abuse, sex, violence, addiction and mental health. The show displays these raw and vulnerable topics in an artistic and cinematic way that immediately captures the viewer’s attention, but does the show pose dangers to the young developing teenage mind? Does the glitter and glorified parties weaved throughout the show romanticize the characters’ lives in a way that encourages the choices they make?

Euphoria debuted for the first time on June 16, 2019. It begins with the show’s main character Rue Bennet (Zendaya), a drug addict, returning from rehab at the end of the summer. We meet some of Rue’s friends and a variety of other characters who encounter high school difficulties such as sex, drugs and alcohol abuse. The use of colorful lighting, primarily blues and purples, as well as glitter makeup form Euphoria’s trademarked aesthetic throughout season 1. The colorful sparkles, eccentric outfits and stunning soundtrack in each episode, plus each character’s engrossing storyline, appealed immediately to viewers across the nation.

Drugs and alcohol can be seen everywhere, in TV shows, movies and commercials. What we must pay attention to is what kind of light the media is shedding on substances and substance abuse. Drugs and alcohol are a part of every teenager’s environment, no matter what role they play. Even if a teenager has never touched a vape or a can of beer, you can bet they’ve seen drinking occur on the latest popular coming of age show. In today’s environment we are pressured to think substance abuse or drinking helps you fit in or makes you look cool, but how can we not when our favorite TV show characters are doing it? When viewers only see the fun, exciting aspects of drinking or smoking, it’s hard to imagine it could be all that terrible. It can make one think “after all, the character’s fine, what could happen to me?”

What makes Euphoria different from any other coming of age movie is the raw depiction of growing up in a world surrounded by drugs, alcohol and opportunities to make dangerous choices. Euphoria doesn’t sugarcoat the truth: drugs and alcohol can ruin you.

In many ways, season 1 was drastically different from season 2. In season 1 we see Rue’s regular use of pills as well as the parties where she experiences intense highs. These scenes were produced using incredibly creative cinematography and muffled music to help the audience understand what that may feel like for the character. For the majority of season 1 we see the characters test the limits of safety, which then leads into season 2, the consequences of everyone’s actions. Season 2’s themes of withdrawal, the rethinking of friendships and relationships and character development after being faced with the hard truth, provided a perfect representation of what can happen if you choose to make poor choices like many of the characters in Euphoria.

Teenagers are always looking for someone or something to relate to, a person or place where they see themselves represented and feel comforted knowing they aren’t alone. As time progresses, so do the problems teenagers face, which television reflects. The question is: does romanticizing these challenges and real-life difficulties through elaborate drama-filled storylines create a show that is actually beneficial for teens? Or does it merely romanticize these experiences?

Euphoria’s extensive audience contains a variety of people who all watch for different reasons. Whether it’s because the show makes them feel understood, or because it’s an exciting display of drama, self-expression and cinematography, the show is beloved. It’s uncensored and relatable, as well as incredibly entertaining, as long as viewers take the time to reflect on what they’re watching and remember not to glamorize these challenges.