A Thousand Splendid Suns: Is it really so splendid? 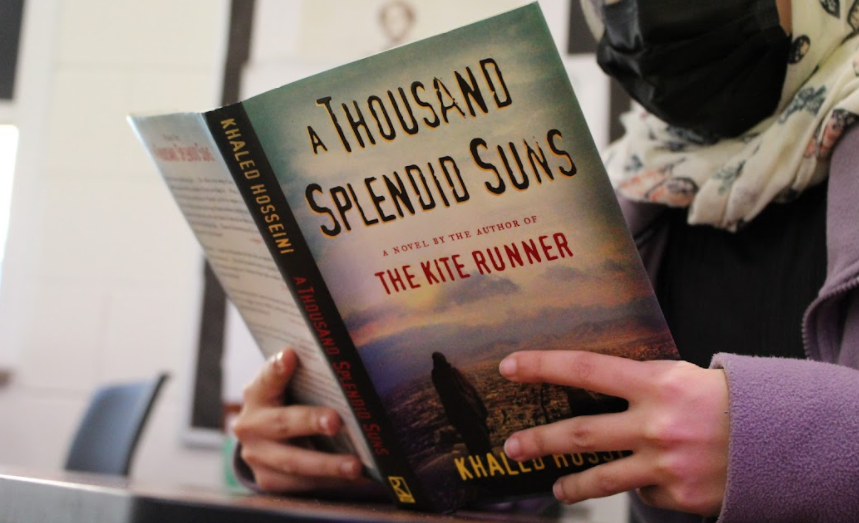 In World Literature classes at LHS, students read a myriad of books highlighting stories and experiences from all over the world. One of these books is A Thousand Splendid Suns (ATSS) by Khaled Hosseini. ATSS follows two women and their experiences in Afghanistan. Teachers in District 128 began teaching this novel back in 2013 as a part of the World Literature curriculum to expose students to Muslim culture.

However, its credibility has been questioned quite frequently throughout the years. Some would argue that the book’s mature scenes can be eye-opening to young students, but do students have the maturity to comprehend it? Additionally, with naive eyes, is the portrayal of Muslim culture as accurate as it seems?

A big factor in this decision was when teachers assigned students a summative assessment where they had to write a letter to the administration to defend if they believed the text should continue to be taught in classrooms or not.

Responses were split between three different stances: continue teaching, continue teaching but only with supplementary sources, and remove it from the curriculum entirely. Based on arguments that students who wanted the book removed, the VHHS teachers decided the negatives outweighed the positives, and the positives could be achieved with a different book.

As a Muslim student at LHS, I believe there are several instances where the story portrays Islam and the people who live in Middle Eastern countries in a horrible way.

For example, throughout the novel, both Muslim female protagonists go through hardships and solely rely on men to pick up their lives after tragedy.

Mrs. Anne Singleton, a world literature teacher at LHS, decided not to teach the book because of the oppressive imagery of women.

“[When I read the book] I felt sorry for women who live in Afghanistan,” Mrs. Singleton said. “That is not what I would want my students to get out of it. Because if anything, it perpetuates this stereotype of women as being fragile and frail.”

Additionally, the difference between a student and a teacher reading this text is the level of knowledge surrounding political and global issues. ATSS represents Afghanistan through the Soviet-Afghan war, the Taliban, and the Mujahideen.

So while ATSS is an interesting, provocative story, it’s also a single story. When students are introduced to this text, they are likely to accept the stereotypes around Afghanistan as the truth. The story’s plot and dramatization can be seen as real in a student’s perception of Afghanistan.

Teachers at LHS who have their students read the book use it to combat negative stereotypes. Mrs. Karen LeMaistre, a world literature teacher at LHS, has been teaching this story for many years. Mrs. Lemaistre supplements the text with other resources about the experiences of Muslim women and of Afghanistan.

“Students come in with very limited understanding and I think some of the prejudices and the stereotypes that students are concerned with, unfortunately, already exist,” Mrs. Lemaistre said. “So it’s my intention to help them see the things they do know but more significantly for more students, what they don’t know [about Muslim culture].”

However, I think ATSS simply reinforces too many harmful stereotypes and I encourage teachers to replace this book with a more accurate depiction of the Middle East and its people.

Another issue in ATSS is the dark, mature themes that sophomores lack the maturity to handle. The book features tragic events such as suicide, execution, and domestic abuse. At LHS, there are teachers who have decided not to teach this story primarily because of the vivid imagery, triggering topics, and the negative portrayal of women.

“The amount of graphic violence permeated my reading experience,” Mrs. Kristin Bolsinger, a World Literature teacher at LHS, said. “I thought that this might be a challenging target for my sophomore students.”

That being said, as English teacher Mr. Matt Tooley, puts it, “part of the role of the school is to expose students to things they may not necessarily normally expose them to, and to help students grow not just in an intellectual capacity, but also emotional capacity.” However, combined with an inaccurate portrayal of Afghanistan, the book does more harm than good. The negatives outweigh the positives severely. If LHS, a majority white school, decides to keep on teaching this novel, negative stereotypes about Middle Eastern countries may continue to be enforced in the minds of growing students. Therefore, LHS should follow in the footsteps of VHHS, and remove the novel from the curriculum.