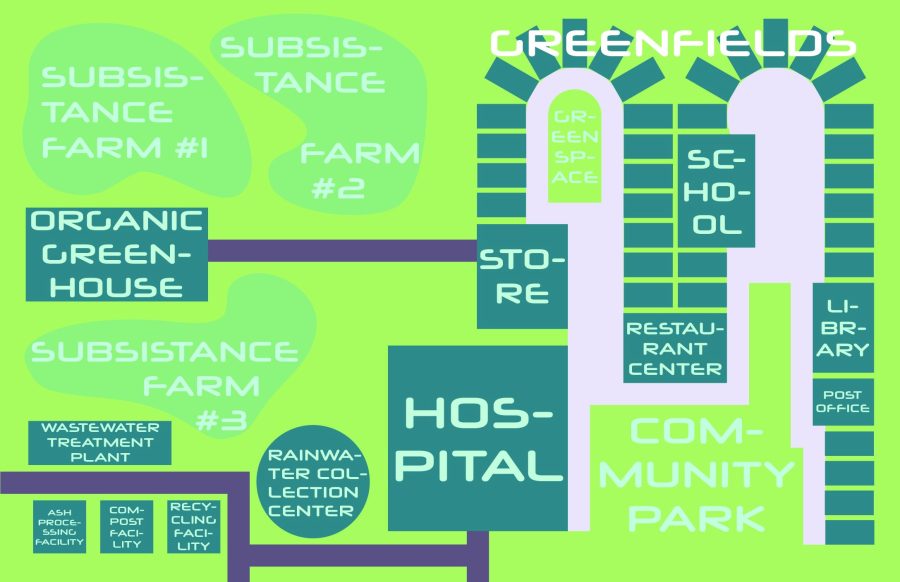 For many years now, sustainability has been a concern of the world as a whole. Sustainable concepts, from food production to energy, have been experimented with around the world. But what if these ideas could be joined together, and harvested for their full potential? What if clean energy could power entire cities, not just single homes? What if each city grew its own organic food, rather than relying on a rapidly dwindling supply chain from abroad that threatens local farmers? These ideas have all been combined to create Greenfields. Greenfields is hypothetical and exists only in my imagination as the ideal image of a sustainable city, but hopefully one day it will exist in reality.

Public Transportation
Another example of where green ideas are initiated is in public transportation. Using a concept known as “new urbanism”, neighborhoods in Greenfields are built around the concept of everything needed being within walking distance. Cities are built around the needs of people, not around the needs of cars. Well-lit pathways create a safe atmosphere for pedestrians, while simultaneously connecting all of the important places within the community. Gardens and lighting throughout provide a calming aesthetic. Roofs running above the pathways protect from rain and weather hazards, while solar-powered heaters running beneath the paths prevent snow and ice from forming in the winter. Since everything is so close, there is little need for privately-owned cars, and the outdoor atmosphere fosters communication between individuals, and less of a reliance on technology.

bus illustration for SNO
Personal Transportation
Some motorized transport is necessary to keep the city of Greenfields running. This is why traditional gas stations around town have been replaced with solar powered charging stations for all vehicles. In addition, cars, trains and buses are all equipped with solar panels to create a sleek and energy efficient design for all forms of motorized transportation. Home garages are also installed with these specialized solar charging stations, and as one final precaution, backup hydrogen fuel cells are installed on each and every vehicle, ensuring that no vehicle remains powerless. In addition, traffic and street lights feature LED bulbs, which are energy efficient, rechargeable through solar power, and a perfect solution for modern transport.

Housing
In Greenfields, each and every house is powered by a system of solar panels. Although solar panel systems are not cheap, with a whole-house solar panel system having a price between $15,000 and $25,000, at the same time, the average Illinois household spends $112 a month on electricity alone. This means that within approximately nineteen years, a solar-powered system would pay for itself. This does not include how much the price may shift for smaller housing, tax credits, or the various other expenses related to oil-produced electricity that pull money straight from the pockets of consumers and would make solar power more affordable.

house illustration for SNO
Garbage Disposal
Perhaps one of the biggest threats to Earth’s ecosystems is improper management and disposal of garbage created by humans. Countless items that need not be disposed of in our precious environment make their way into landfills, where they continue to pollute the planet. In Greenfields, every home is installed with a compost bin. Food scraps are placed
in these bins, similar to how normal trash would be placed into a garbage can. Once a week, a truck collects the food scraps, and they are taken away to be made into organic compost and fertilizer. This is used to make gardens, flowerbeds, and organic environments flourish from the increased nutritional boost of the compost. In addition to the compost of food, homes are installed with recycling bins to recycle paper, plastics, glass, and other recyclable materials. The final component of garbage disposal is a trash incinerator for wood and non-recyclable trash in every home.
The incinerator, similar to a home furnace, takes in the wood and non-recyclable trash, and burns it to generate thermoelectric power, which runs from the houses throughout the city to serve as backup power. Specialized piping and a protective cover on the incinerator contain smoke, fire, odors, and fumes, so that life in the house can function as normal. An ashtray located in the home basement collects the ashes, which are then placed into a trash can to be taken to the Greenfields processing plant to be dissolved and diluted in specialized chemicals, effectively eliminating the need for landfills. These methods are a crucial part of Greenfields, and represent a significant step towards a reduced carbon footprint.

garbage illustration for SNO
A Sustainable School
On average, a school requires about ten kilowatt hours of electricity to run year-round. In Greenfields, the main source of energy is much more unique and clever. With the help of a real-life company known as Pavegen, the school uses footfall-harvesting power, where a single footstep on a specialized tile, made from nearly 100% recycled materials, according to New Atlas, can produce around three joules of electricity, or 0.00000083333 kilowatt hours. This may seem like a small amount of electricity, but with most highschools averaging over one thousand students, if each student took about one thousand steps a day, that amount increases to 0.83333 kilowatt hours of electricity each day. Combined with the approximately 180 days a year that students spend in school, and there’s enough electricity being produced to power a school nearly fifteen times over, just by students walking to and from their classes. These tiles, if produced in large supply and made affordable for a school’s budget, could be the end of unclean energy being used to power our most important buildings.

Agriculture
Based on concepts such as those utilized in Dubai’s 46-hectare prototype of a sustainable city, sustainable agriculture in Greenfields is one of the top priorities. Enough food must be regularly produced to nourish the needs of the consumers residing within the city. Organic greenhouses, gardens, and farms, using organic fertilizers, natural lighting, and clean, untainted water, produce more than enough food around the clock to feed the city’s occupants.

In conclusion, while a city like Greenfields is unlikely to happen any time soon, it does represent a beacon of hope, a way forward, in a time when climate change and a lack of sustainable practices threaten our planet. By working together, someday in the future, a community such as Greenfields can become a reality.