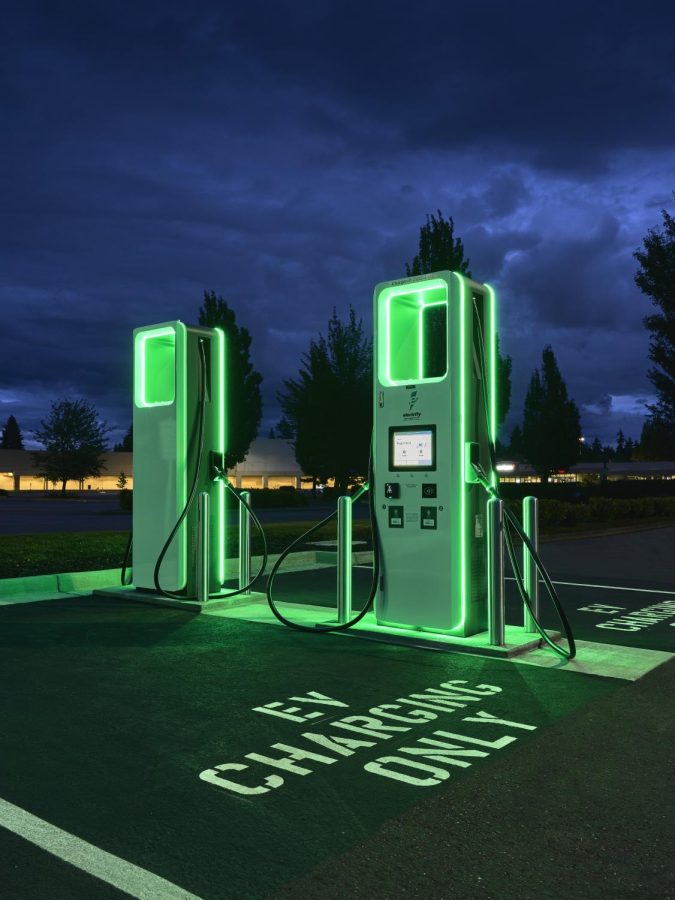 Photo via Electrify America Newsroom The infrastructure bill invests $7.5 billion into the national buildout of fast chargers to make traveling in an electric vehicle easier. These chargers will be placed strategically along highways and transportation corridors under networks like Electrify America (pictured) and EVgo.

On November 15, 2021, President Joe Biden signed the $1.2 trillion Infrastructure Investments and Jobs Act, enacting the bill, which has been compared to historical relief packages, into law.

The bill not only seeks to improve infrastructure, including drinking water, roads, public transportation and broadband coverage, but also will create jobs to support these projects, especially in construction.

It is projected that the bill will add an average of 1.5 million jobs per year for the next 10 years, mostly in the areas of construction, to help aid the implementation of the new building project.

Illinois will see $17 billion of the infrastructure bill, with Governor JB Pritzker’s office dividing up where the funds will go. The money will be spent based on need, so the areas that require the most help will get the most funds.

“One of the ways that typically [the government] would divvy up the money for schools is based on income,” said District 128 business manager Dan Stanley. “So if you have a high low-income population, you would get more money. A district like ours has a pretty low low-income population, so we don’t get a whole lot of federal money because, understandably they recognize [we] don’t really need it.”

A majority of federal funds granted by the Infrastructure Investment and Jobs Act will go towards transportation, totalling to $284 billion. Almost half of this sum, $110 billion, will go towards the U.S.’s crumbling roads and bridges.

Construction projects across the country have broken ground following the signing of the bill, including many in Lake County, according to the Chicago Tribune.

Illinois’s roads are ranked third worst for congestion, along with excess fuel consumed, in the country. Of the funds Illinois received, a total of $11.2 billion will go to improving roads, divided between highways and bridges.

“We have potholes; we’ve got bridges and all those other things that need attention, so I would hope… that the benefits of [the Infrastructure Investment and Jobs Act] would be spread nice and evenly throughout the country, including Lake County,” stated AP US History teacher Andrea Lara.

As climate change has become a greater threat, more emphasis in government has been put on making the United States greener, and the Infrastructure Investments and Jobs Act is no different. A total of $105 billion will be put towards improving public transit, including both buses and railroads.

The public transit system in the United States is ineffective and “broken,” according to Vice News. The investment in improving transportation in the bill could fix these problems, encouraging more people to take public transit instead of personal vehicles, which would help reduce the amount of harmful greenhouse gases emitted into the atmosphere.

As well as public transportation, the bill makes an effort to make personal transit greener by investing in infrastructure for electric vehicles (EVs), including both cars and buses. The United States is behind other countries in EV infrastructure, but this act seeks to provide the foundation for a reliable network of EV charging stations.

Illinois is set to spend $149 million on building charging stations throughout the state, but it is eligible to get up to $2.5 billion more in grants to further expand EV infrastructure.

In today’s world, it has grown even more necessary to have reliable internet access, as more and more aspects of life, including work, school, and gatherings, have moved to remote, due to COVID. Without internet access, many students, especially in low income areas, were left behind academically, since they didn’t have the resources to succeed.

A significant amount is also going into providing broadband coverage across the country, especially in rural areas. Over the COVID-19 pandemic, already present income disparities have worsened, since low income areas are far more likely to have no broadband providers.

“[District 128] found that, after remote learning, [some kids] just wouldn’t h,ave internet connection… There probably is work to be done in the Libertyville area to help improve their broadband connectivity just because [buildings and infrastructure] is very old,” explained Stanley.

The Infrastructure Investment and Jobs Act puts $66 billion into expanding broadband coverage and “ensur[ing] every American has access to reliable high-speed internet,” according to the White House.

The bill was passed with some bipartisan support, first going through the Senate and passing 69-30, then the House of Representatives, where it passed on a far slimmer, far more partisan margin of 228-206.

“Not much [legislation] has passed Congress lately that has been bipartisan,” said AP Government teacher Matthew Wahl. “One of the reasons why is the Senate filibuster rule where, essentially, you have to get 60 votes to get anything passed, so the [infrastructure] plan is very significant because [it cleared] that hurdle.”

The bill was one part of a combined omnibus package that made up the Build Back Better Plan. It was split into two sections, the Infrastructure Investment and Jobs Act and the Human Infrastructure Plan, which passed the House of Representatives and has yet to pass the Senate.

For a while, the Infrastructure Investment and Jobs Act was in deadlock in the House between Speaker Nancy Pelosi and factions within the Democratic party, after passing the Senate.

Progressives in the House of Representatives initially threatened to vote “no” on the bill without the passage of the Human Infrastructure plan first, which would have killed the act in the House, given its limited support from House Republicans.

“Progressives really hurt this cause,” Mr. Wahl explained. “They held the bill back and hurt the Democrats in the [2021] elections. If they had actually passed something tangible, maybe the Democrats could have won. In the end, it was the Congressional Black Caucus that pushed it forward for the rest of the party.”

At the last minute, progressives made a deal with Pelosi and voted for passage, sending the legislation to President Biden’s desk.

The Infrastructure Investment and Jobs Act is similar to Franklin Delano Roosevelt’s New Deal and Lyndon B. Johnson’s Great Society, both of which sought out to expand social welfare and eliminate poverty, according to Politico.

Much of the effects of this legislation will not be visible for years, as infrastructure is slowly built up and improved nationwide.

“It’s one of the biggest investments in [infrastructure] in American history,” said Mr. Wahl. “Just like the American people, I’m kind of torn on it… We want to wait to see results and what it actually will accomplish… Hopefully, it goes to all the right places… We may not see for a few years. We won’t know if it’s a good or bad thing until [then].