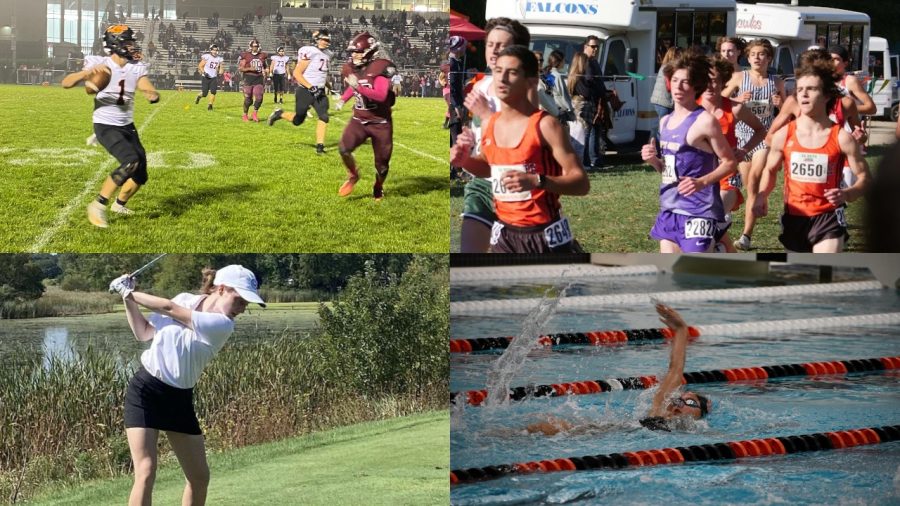 The football team finished with an overall record of 6-3 and placed third in conference. Senior defensive end Sam Pinsel led the defense by putting up the most tackles and sacks on the team. The offense ran through senior quarterback Connor Dickson and senior running back Tommy Latka, who combined for over 30 touchdowns. Notable performances featured the offensive line only allowing only three sacks on the season, senior Andrew Scott scoring a 99-yard kick return, and the 76 points scored against Waukegan, the highest single game total in school history. The Wildcats advanced all the way to the IHSA Playoffs. “Making it to the playoffs meant everything,” said Dickson. “I’ve played with those guys since kindergarten. With a shortened season last year and everything that’s going on, it was good to know I’d be able to put on a black and orange helmet at least one more time.”

The girls swim and dive team had a season full of wins and record breakers. In a regular season meet against Lake Forest, two pool records were broken by the Cats swimmers. Sofija Tijunelis (10), Georgia Kahler (10), Sarah Wuh (11), and Logan Howard (10) swam a time of 1:47.79 in the 200 Medley Relay. Later in the meet, the same four girls broke the pool record for 200 Freestyle Relay, by swimming 1:38.77. The postseason began with a second place finish in the conference for both the swimmers and the divers. The weekend after that was Sectionals, where Libertyville swimmers qualified for state in 2 relays and 5 individual events. Howard qualified in the 50 and 100 freestyle, Kahler made it to state in the 50 freestyle and 100 breaststroke, Tijunelis punched her ticket in the 100 backstroke, and the two record breaking relays qualified as well. Two divers also qualified for state, as senior Maddie Rupert placed 5th in Sectionals and sophomore Ally Humbert placed 7th. At the state meet, three medals were won and three school records were set by the swimmers. The 200 Freestyle Relay placed 7th, with a record time of 1:35.53, Tijunelis earned 11th in the 100 Backstroke at 56.65, and Kahler placed 8th in the 100 Breaststroke with the third school record of the meet, 1:03.64. “It was really exciting,” Tijunelis said, referencing her two state medals. “I wasn’t even nervous. I had a great time, I was just there to have fun.”

The girls tennis team placed 7th in state after an incredible postseason run. The North Suburban Conference proved to be a powerhouse in tennis this year, with the Cats placing 3rd in their conference despite being 7th in the entire state. The doubles team of senior Alexandra Berns and sophomore Hadley Warren finished third in sectionals and won two matches at the state tournament.  Freshman Lena Dogadalski placed fourth in sectionals and advanced into the top 32 at the state singles tournament.  Her teammate, junior Maggie Forkner, won third in sectionals but, at the state tournament, Forkner lost her first match. However, in the double elimination format, she stayed alive and won five matches in a row on the same day at state to place 6th overall. “I think it’s neat that tennis allows you to compete individually to qualify for state but then also work together to gain team points to get a place in state,” Berns said.

The girls cross country team had an incredibly successful season. Their varsity team, featuring senior Bree Ponchak, junior Sheila Tucker, sophomores Margaret McGormley, Liz George, and Lauren Hilts, and freshmen Natalie Schlitt and Anna George had an undefeated regular season and won Conference. They followed that up with a victory at Regionals and a seventh place finish at Sectionals to qualify for state as a team, a rare feat in the program’s history. At the state meet, every girl ran her season best time. Ponchak led the way with a three mile time of 17:55 and finished 64th overall. Each team’s top five runners contribute to the overall team score in cross county, and Ponchak was joined by Tucker (83rd- 18:08), McGormley (117th- 18:30), Schlitt (166th- 19:03), and Liz George (192nd- 19:23). The team placed 21st overall in the state. “Making state in my senior year was truly the highlight of my entire high school running career,” Ponchak said “It was such an incredible way to end my final season, as all of the miles put in and hard work devoted to this sport over the past four years seemed to culminate to this point. I couldn’t have imagined a stronger team to work with or a better season to go out on.”

The boys cross country team saw two runners advance to the IHSA state meet. Senior Ali Faiz placed 56th at state, with a three mile time of 15:15. Fellow senior Jack Hamilton placed 89th with a time of 15:28. Throughout the season the Cats put up big performances. Faiz and Hamilton were joined in the top five by senior Dylan McCarty, with a best time of 16:30, senior Andrew Brooks, 16:37, and freshman Michael Chudy, 16:46. They won the Adler Invite on their home course, placed third as a team at Conference, and placed fourth in Regionals in order to advance to the Sectional Meet. At Sectionals, Faiz and Hamilton placed in the top 30 to qualify for state. “It’s been my goal since freshman year to make it to state,” Hamilton said. “Having run there for the first time in my life was just an otherworldly experience. And to be able to perform at my best and at the highest level, I am incredibly proud of myself.”

The girls volleyball team took home the conference title with a season record of 23-14. The Cats started the year 10-10 and bounced back for a 13-4 record down the stretch. “I think our season went really well,” sophomore Hannah Fleming said. “We started off not doing so well just because we were a new team and had lots of new players. But we gradually improved and we ended up with a really good season.” The bump, set, spike combination of senior Grace Comilla, senior Grace Bonjour, and junior Keira Kasten proved to be tough to contain. After winning the conference, the team fought all the way to the Regional Final before ultimately losing to Barrington.

The boys soccer team finished with a record of 10-7-4.  The team was led by Alex Laroi, who scored eight goals on the season. The Wildcats advanced all the way through the postseason tournament to the Regional Finals, where their season unfortunately came to a close. One notable moment of the season came against Round Lake. Sophomore Mateo Portillo was bumped up to varsity and scored a goal to help the Cats win. “My favorite part of the season was the Round Lake game because it was my first varsity game and I loved how the student section was there to support us for that game,” Portillo said.

The boys golf team won the Lake County Invite for the first time in school history. This victory was just one of three three tournaments the Cats won throughout the season. Seniors Ethan Lindberg and Mack Imm led the team as they continued their success by placing 2nd as a team in regionals. Lindberg and Imm had season best scores of 75 and 78 respectively. “I feel like our team competed to our highest abilities,” Lindberg said. “We were able to beat teams such as Lake Forest, which is a match that historically we don’t usually win.”

The girls golf team had great success in the 2021 postseason. The Cats placed third as a team at Conference and seventh as a team at Regionals. Junior Audrey Weadick qualified for Sectionals and shot an 88 at the match. “I felt like the season went very well for everyone on the team,” said senior Syndey Cooper. “Since we had a shorter season this year, I think it made everyone a little more motivated to keep moving up. My favorite part of the season was probably that we got to have pasta parties again. Even though they had to be outside, it was still so awesome to get to have those back after COVID.”