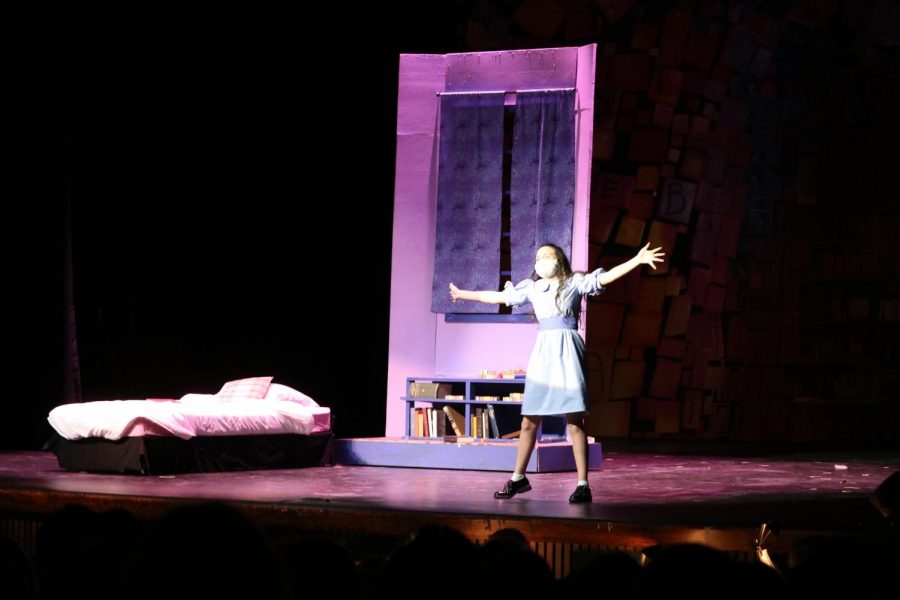 Disclaimer: The content of this article contains potential spoilers for those who have not yet seen “Matilda: The Musical.” The only show viewed for this article was Oct. 28, but the Oct. 29 and Oct. 30 evening shows contained an alternate cast.

The LHS Theater Department’s production of “Matilda The Musical” is a joyous experience that perfectly captures the spirit of childlike wonder and will tug at your heartstrings.

“Matilda” is the story of a gifted young girl, Matilda, and her struggle to fight for what’s good and right in a world of cruel adults. Matilda, played by sophomore Jordana Block-Terson, is overlooked by her parents and finds solace in books; it isn’t until she attends school that her gifts are appreciated by her teacher Miss Honey. Throughout the show, Matilda and the other schoolchildren get into various antics and misadventures, all while trying to avoid punishment by the cruel headmistress Miss Trunchbull.

From the first word, the performance of the cast brings an electric energy that can be felt in every inch of the theater. Every moment is as entertaining as it is visually interesting, from the comedic delivery of the members of the Wormwood family to the intricate and thrilling choreography of the ensemble.

“Honestly, we’ve put a ton of work into this and I think it really paid off in the end,” said ensemble member Megan Snow (12).

One cast member, Nadia Simpson (12), played the Acrobat, an imaginary woman Matilda creates for one of her stories. Matilda imagines a grand trick for the Acrobat, which leads Simpson to take a spectacular flip off a 7-foot bookshelf as the spotlight goes dark.

“It was really scary doing it for the first time…but now it’s easy,” Simpson shared, saying her first attempt in rehearsals was two weeks ago. For her first official performance, she said that, “I was afraid I was gonna mess up or the lights wouldn’t go off, but everything was fine.”

The trick was a marvelous surprise to the audience, made especially shocking by Block-Terson’s powerful narration of the story. Matilda’s ability to create stories and captivate her audience, whether it’s the librarian Miss Phelps or when she’s rounding up classmates to fool Trunchbull, makes the show so thrilling and fun. Block-Terson’s portrayal of Matilda keeps you on the edge of your seat, ready for whatever tomfoolery Matilda will get into next.

“It was kind of surreal,” says Block-Terson. “I have been mentally preparing myself for this for a while but I don’t think it really fully hit me until I walked out and I saw people in the audience and I was like ‘Wow this is actually happening.’”

The return of a live audience had a powerful impact on the actors and the audience itself. As an audience member, it was fun to once again hear collective laughter and gasps. The cast also felt this energy and took advantage of the opportunity to engage the audience.

“I really love revolting children,” Snow said. “It’s that number at the end where there’s all the little kids dancing on stage and then there’s the big kids in the audience dancing around and interacting with the audience members. I think that is such a fun addition and it’s always unexpected for the audience.”

The director Mr. Thomas also expressed his pride and excitement for the cast being able to perform live again, saying, “It was such a fantastic experience for us to be able to share a show with an audience in the same room, right? We haven’t been able to do that for so long so it was a true gift.”