Football bounces back to beat Zion-Benton 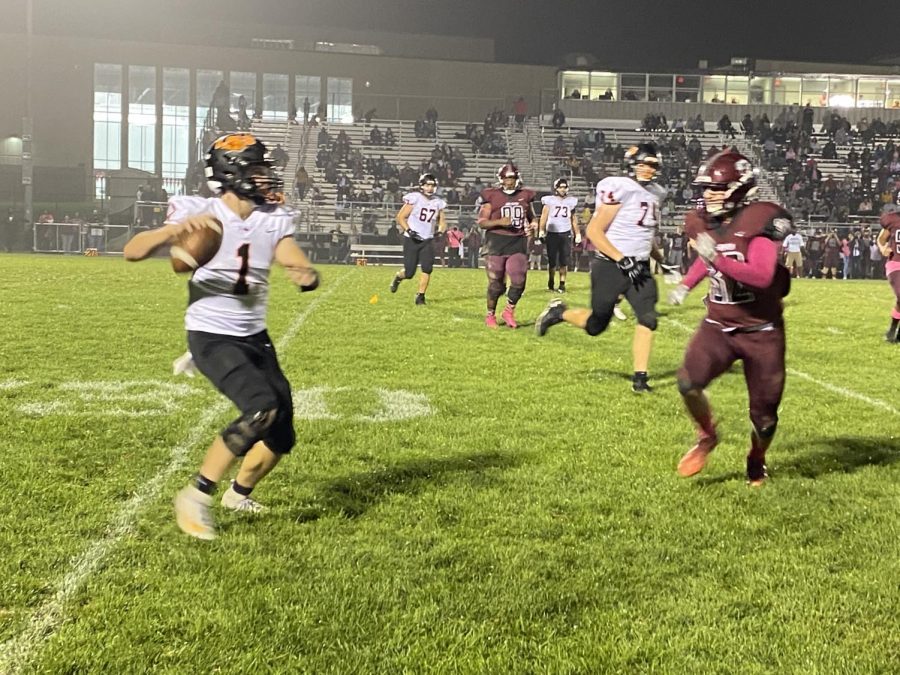 On Friday, Oct 8, the varsity football team beat Zion-Benton 30-20. The Wildcats fought on a mud-filled grass field for a big road victory to improve their record to 5-2. On the offensive side of the ball, senior quarterback Connor Dickson led the team to one of their highest scoring offensive outputs of the season. On defense, senior defensive end Sam Pinsel led a strong effort against the Zee-Bee’s elite running game.

A turning point in the game came in the early fourth quarter. Libertyville had a 10-point lead, but Zion-Benton was mounting a drive, threatening to create a one score game. On a second down in Libertyville territory, Zee-Bee running back La’Zarius Geater broke through a crease and had no defenders between himself and the endzone. However,  junior defensive back Austin Gomez dove for an ankle tackle to prevent an almost assured touchdown. The very next play, Pinsel dropped the opposing quarterback in the backfield for a sack and forced the Zee-Bee’s to punt.

Once back on offense, the Wildcats had a four-play touchdown drive with road-grating from the offensive line and strong running by junior running back Charlie True. Libertyville then led 30-13, and never looked back.

“I was happy that I could send our offense out,” Pinsel said, referencing his big sack. “But it wasn’t just me, it was everyone on the defense.”

“[Geater] is really good,” said Budge. “We worked on containing him and just trying to make sure we all run to the football and don’t have one-on-one tackles against him. And I think for the most part we executed tonight.”

This defensive effort was more difficult than it had been in the past for the Wildcats because they had to do it without three of their senior defensive starters who were out of this game due to COVID protocols.

“They were our heart and soul,” Budge said. “The guys are missing their leaders who get us into the right coverages and fronts.”

However, this circumstance provided an opportunity for players who don’t typically start on defense to step up. Nevins, the starting linebacker, said “there’s a lot of juniors that have stepped up this week. Some of our new starters were like ‘You know what, I need to become a leader’. I’m just really proud of them to be honest.”

Pinsel shouted out junior defensive back Luke Williamson as someone who stepped up big in the secondary. Williamson consistently made downfield tackles in the run game throughout the first half and broke up passes on both 3rd and 4th down in a late fourth quarter drive by the Zee-Bees.

The defensive effort was summed up by Nevins: “We just took it to them.”

It wasn’t just the defense with an impressive performance on Friday night. The offensive run game was nearly unstoppable, gaining chunk plays on the ground all night.

“We didn’t think it was gonna be this muddy because it didn’t really rain today,” Dickson said. “But once we started to play we realized the ball was slick and the ground was slick so it was just Smash Mouth football.”

This power run game was led by Dickson, True, and junior Rocco Lavista. The Wildcats are still without starting running back Tommy Latka, who injured his ankle in the Mundelein game, but as Dickson said, the team “ran the ball pretty well.”

However, the entire success of the run game cannot be attributed to the quarterback and running backs. The offensive line opened up holes in the run game and gave Dickson ample time in the pocket throughout the game.

“We like to use the term Mules, as the people who do the gritty work,” Freedman explained. “The people that do the work that’s not very flashy, but it’s vital to getting the job done. The idea is whenever there was transportation back in the day, people would ride on Mules. When you get to the destination, you always congratulate the person riding the mule. You never thank the mule, even though they did the brunt of the work. We do the work that’s considered thankless.”

Portillo says the offensive line is used to doing the work that “goes unrecognized.” However, even if they don’t receive praise from the fans, the players know how important the Mules are to their success.

Dickson shouted out the effort from the offensive line immediately after the game. “They haven’t allowed a sack all season which I’m sure is a school record,” he said. “They’ve been incredible.”

This week, Libertyville will host 6-1 conference leader Warren before traveling to Stevenson the following week to finish off the regular season. The five wins the Wildcats currently have are enough to be playoff eligible. Six wins would clinch them a spot in the postseason tournament.

Coach Budge said the team’s goal is to “just get better and keep playing games into November.”