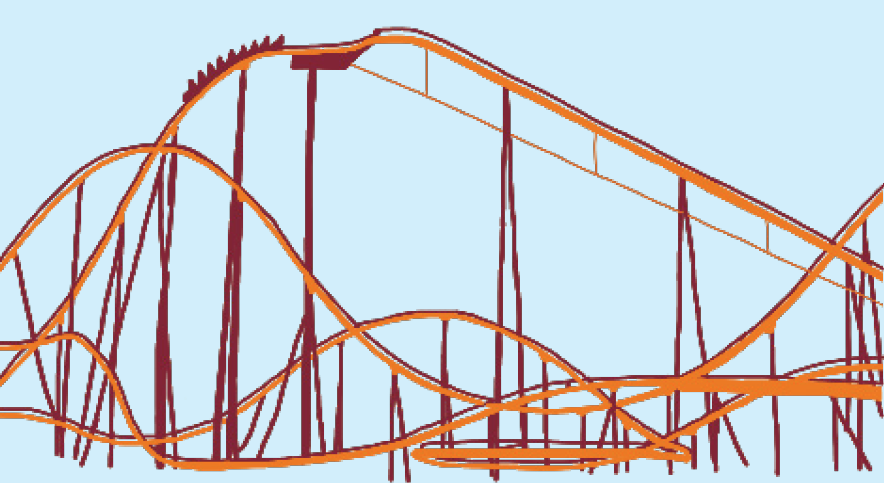 The Raging Bull dominates Southwest Territory as a fan favorite. This coaster makes up for its lack of loops with high, steep drops and plenty of thrills throughout.

Note: Mardi Gras Hangover is considered a roller coaster by the park itself, however various organizations such as the Roller Coaster Database (RCDB) and American Coaster Enthusiasts (ACE) disagree. Thus, it will not be considered on this list. American Eagle has two separate tracks so it will be considered 2 coasters. The ride experience is similar on both sides, so the rating will be pooled together.

The Sprocket Rockets kids’ roller coaster is too short to enjoy. The twists and turns of the ride are underwhelming. After the ride was stripped of its original name, it doesn’t really hold the same novelty as before. The ride’s station could use a lot of love. However despite the ride’s shortcomings, it still is a great ride for roller coaster enthusiasts in training.

The Demon is a 100 foot tall steel looping coaster and is one of the most iconic rides in the park. The ride even has its own ominous theme song played at the ride’s station. The ride today though… is less than perfect. The over-the-shoulder restraints are very uncomfortable, especially for taller riders like me. The roughness of the ride is also very prominent and ruins the ride experience. Don’t expect the ride to go anywhere though, as it has its fans and holds a special place in the park’s history.

The Dark Knight Coaster is the only indoor coaster in the park. Guests walk through the Gotham City Subway to board the ride and experience the siege of the subway by none other than the Joker. The ride really is well themed and has some cool elements to immerse the riders. Thankfully, the theme makes up for the jerky ride experience. Cars traverse 180 degree turns that whip you around in your seat. It really isn’t one of the greatest rides in the park. Still, I recommend riding it because it is one of the most unique rides at Six Flags.

Little Dipper is the oldest ride in the park, dating back to the 1950’s when it opened at Kiddieland in Melrose Park, Illinois. After the closure of Kiddieland, the ride was auctioned off to park president Hank Salemi. The ride was relocated to Great America and is “keeping the history alive” to this day. This is the first wooden coaster on this list and truly is a great ride. As the name suggests, it is a kiddie coaster, but still is enjoyable for all. Little Dipper offers great airtime for such a small coaster.

Vertical Velocity, or commonly known as V2, is a steel launch coaster which opened in 2001 as a result of the 2000’s coaster wars. The park even added the now-defunct Deja Vu roller coaster in the same year. The ride experience is super intense, with it gaining speed each time it goes up the spikes. The ride really doesn’t carry a unique theme, but that will change for the 2022 season when the ride will be re-themed to the DC Comics superhero – the Flash. It will fit in with the nearby Joker and Batman.

The Viper is a fun-filled wooden coaster themed to the snake itself. The ride is a mirror image of the classic Coney Island Cyclone. The ride by far has the best station and is themed to snakes taking over an oil refinery. The ride is enjoyable and the drop gets your heart pounding as it slowly crests the hill. I highly recommend riding in the back row as the drop seems larger. The airtime on the ride is extreme and probably gives the most airtime behind American Eagle and Raging Bull. Since the ride is wooden, a slight roughness is to be expected.

The Joker – themed to the DC Comics Villain – is another interesting ride at the park. The ride is steel and traverses two, beyond 90 degree drops while the seats can “free-fly” 360 degrees at the same time. The ride is quick, but super crazy. I really like the Joker because each ride experience is unique due to the seats moving on their own. But, you can bang your head on the headrest due to abrupt flips.

American Eagle was built as the tallest and longest racing wooden coaster in the world, and it still holds those records to this day according to RCDB. This ride is another true classic for the park. The ride is fast and offers some amazing hard pops of airtime. It is super fun in the back row as the airtime is even more extreme. The ride is 40 years old now and has long past its prime, but it is still so much fun. The ride really isn’t that rough except for the large helix seen by cars on interstate 94. It vibrates more than it is rough.

Whizzer holds a special place in my heart, as it was my first roller coaster when I visited the park in 2013. The ride is only one of two remaining electric spiral lift coasters in the world. Even the seats are unique as you sit “toboggan style.” For a family coaster, it packs a punch and the helixes are very forceful. The atmosphere really makes this ride. There is just something super cool about rushing through the trees, especially at night. Even though the ride is 45 years old, it still is very smooth.

Batman was the first roller coaster in the world to have the car “under the track” with riders having their legs exposed. The idea was created by the park president at the time, Jim Wintrode. Wintrode pitched the idea to manufacturer Bolliger & Mabillard, thus creating Batman: The Ride (themed to the DC comics superhero), opening in 1992. The ride is fast and intense. The train moves through five inversions including corkscrews and vertical loops. I really like how the ride packs a punch in such a quick time.

X-Flight is another great offering from Bolliger & Mabillard. The ride is a “wing coaster” meaning the seats hang off the side of the track, creating nothing above or below you. The ride has some great inversions and delivers a cool, military-esc aviation theme. Even a soundtrack is played on the lift hill to get riders excited. The “near-misses” are the ride’s greatest features. The train slips through a control tower that is too close for comfort.

Superman – themed to the DC Comics superhero – is a true fan-favorite at the park. It usually has the longest line at the park so if you arrive when the park opens,  make sure to ride this first. The ride is unique because the trains move from a sitting position to a “flying position” (face down) in the station before starting the ride. Thus, you are now flying as Superman himself! The best element of the ride is directly after the drop. It leads you into a “pretzel loop” in which the track is shaped so you complete a full pretzel shape. The element is indescribable, so ride it yourself to find out!

Maxx Force is the newest roller coaster in the park which opened in 2019. It is an “air launch coaster” which means the train is powered by compressed air blown at very high speeds. At the launch, riders are thrusted at 86 mph, accelerating to that speed in just under 2 seconds. That’s Faster than most sports cars! The launch is by far the best part of the ride, and it is mind boggling how fast your surroundings move. You traverse through the rest of the ride very quickly, zooming through 5 inversions. The ride’s only crime is how short it is.

Goliath is probably the most intense wooden coaster in the world. It can achieve this because it has steel “topper track” designed by the ride’s manufacturer. This allows the train to cover steeper elements and even inversions, usually not found on wooden coasters. It delivers a bit of everything, from forcefulness, to airtime while being just a wooden coaster. I am impressed with how the park was able to fit this giant sitting on the plot of land that it does. It truly is a masterpiece.

And now my favorite coaster in all of the park…. Raging Bull! It is a steel hyper coaster only focusing on airtime and tight twists. Raging Bull delivers everything a coaster can deliver. The ride has a very cool western theme paired with an awesome ride experience. The ride literally hauls in the back row through all of the initial drop, airtime hills and tight turns. Oh, did I mention that drop! It is the tallest in the park at 208 feet. The icing on the cake is that the ride is super long, clocking in at a whopping 2 minutes and 30 seconds. The quality of ride for your wait time is top notch compared to the other rides in the park. Don’t miss this!

Check out these related stories: