Revived and Raging: The Student Section 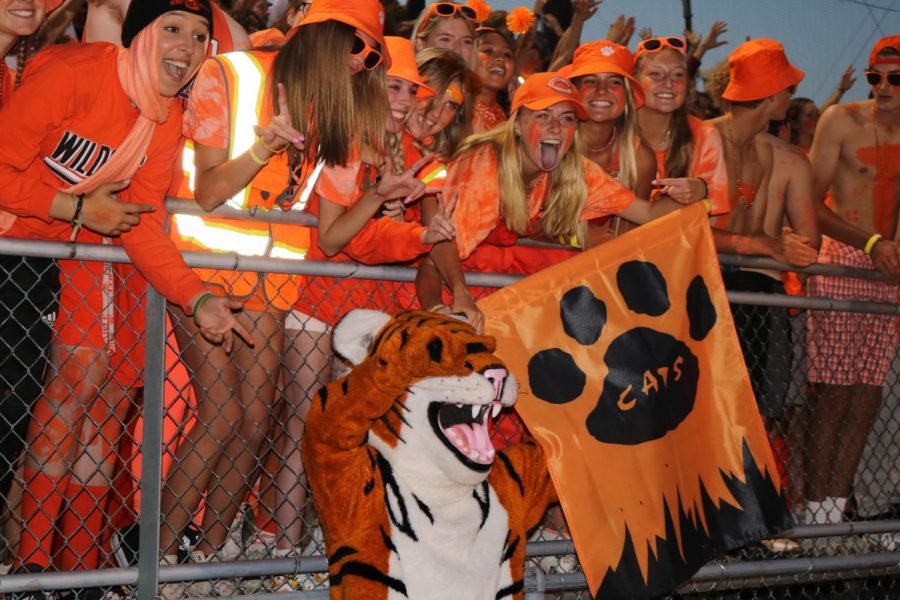 Seniors show their pride with Willy the Wildcat and swing the school’s flag. The first home football game theme was ‘orange out’, and every person was covered in orange to show their Wildcat spirit.

The pounding of hundreds of feet shakes the bleachers. A single voice chanting crescendos into a roar of yelling. It’s hot, it’s sticky. Arms flail. Throats scream. A chant started by the opposing team is met with contentious shouts. All sense of time and personal space is diminished. Only two things matter. The numbers on the scoreboard, and cheering as loud as humanly possible.

As we have re-emerged from the remote learning era of Covid-19, we are gradually returning to normalcy. With this, one of the most beloved parts of LHS has also experienced a rebirth-

Some students have made it their mission this year to attend as many sports events as possible. Led by seniors including Christian Roberts, Grace Mudd, and Jack Bonamarte, the student section has experienced a huge influx of passionate fans, hurtling school spirit to an entirely new degree.

“School events have really changed,” Bonamarte said. “[Now, we ask each other] ‘Are you going to this game, are you going into that game?’ Everyone wants to go to everything now- it’s not just football games on Friday.”

Girls volleyball and boys soccer have been the main focus so far for the renewed student section.
The Group Chat
The swelling hordes of students showing up to support the sports teams did not organize themselves out of nowhere. The origins of the

renewed student section can be accredited to one simple Snapchat story posted by Roberts (the idea for the Snapchat story itself was born in a conversation during Advanced Weight Lifting).

After experiencing a year of muted opportunities to cheer on sports, Roberts and Bonamarte were discussing stepping up to raise school spirit. Knowing that football games would likely have a substantial turnout regardless, the pair wanted to bring attention to the student section at other sporting events.

“[The seniors] needed to spread the word… to get people to all the events, to share the themes, and then to start the cheers at the events,” Roberts said.

Roberts’ Snapchat story mentioned making a group chat to spread awareness about the upcoming sports competitions. To his surprise, his story elicited a resounding positive response, and the 100 spots available in a Snapchat group chat was filled up within 5 minutes. Accommodating the large numbers, he created a new Snapchat group story used to announce games and the themes. The group consists largely of seniors, as well as a few juniors and sophomores. Currently, over 250 people can view the story.

250 is already scores of students, however, the story’s reach extends far beyond the people able to view it.

“We added people who would contribute the most energy to the student section but also students from different sports and different backgrounds to get everyone there,” Bonamarte said.

After creating the group story, and the first couple of sporting events, Roberts, Mudd and Bonamarte emerged as the spirit leaders of the student section.
Making Up for Lost Time
Last year, Covid-19 caused numerous restrictions to be implemented, one of these being a limited audience at competitions. In many cases, only parents were permitted to attend games.

According to Grace Comilla, the captain of the varsity girls volleyball team, the lack of liveliness in the stands then was strongly felt by the players on the court: “Last year, the games were very quiet. We had to create our own energy… The team, especially the seniors, were really sad that students couldn’t come and watch. That loud energy is part of the game, and [we] lost a lot of that.”

Being unable to attend games put a damper on school spirit last year, with many students feeling like they missed out on an important aspect of school.

Henry Eads, a junior, has made sure to attend as many sporting events as he can because of the inability to go to events last year. He has attended most volleyball and soccer matches so far, as well as a girls swim and dive meet and some golf matches.

year, during Friday nights, I would look forward to football and realize, ‘oh we can’t go to the games’. I really think going [to sports games] is an important part of the high school experience.”

After missing out the year prior because of Covid-19, attending as many sporting events as possible, along with recruiting underclassmen, has grown increasingly as a priority for seniors.

“Last year taught [the seniors] to appreciate the things that could be taken away at any moment-like a student section and school spirit,” Mudd stated. “The seniors this year were just really excited for sports and so we tried to spread the word.”

However, despite the obstacles throughout the past year and a half, the underlying motivation behind having a boisterous student section has remained unchanged.

“We want to be known as having the best student section and the best fans in our conference,” Roberts said. “It’ll give our teams an edge in the games if there are better supporting sections. So we thought it would be a good idea to try to support our teams as much as possible.”
Back in the Game
The resurrected thunderous student section has proved to have an influence on the players before the game itself even begins. Joey Yurek, one of the varsity soccer captains, feels the impact of the crowd right from the start.

“Before the games, getting introduced to the crowds, after your name is called there are cheers, and it’s a great feeling,” Yurek said. “Then, when you’re on the field and a good play happens, it’s always an awesome feeling to hear the crowd…It really motivates the team to play better, and it brings up morale.”

Inside the student section itself, the energy and excitement can be overwhelming, yet it is a perfect representation of LHS coming together as a family.

“In the student section, we’re yelling, we’re all cheering for the same team and the same goal of winning,” Bonamarte said. “And when everyone’s chanting, it’s almost a sense of unity that you really don’t feel while you’re in school…When you’re at the games, you’re all there for one reason.”

During a volleyball tournament in early September against Carmel High School at home, there was such a turnout that the bleachers could not hold all of the highly energetic student spectators. Jam packed together, the student section was forced to wrap around the gym. Throughout the game, the Carmel student section and LHS student section attempted to smother the other in deafening roars.

Comilla noted that the spirit put some pressure on the newer players, yet it encouraged stronger communication and energy through the game.

“It’s just fun, and we’re telling each other more tips on how to play better, what’s open on the court, and we’re all collectively communicating more,” Comilla said. “And every time someone gets a point, the celebrations are always louder and they’re more fun.”

After the Libertyville girls volleyball invite, after losing to the cats (0-3), Evanston High School’s Volleyball Twitter account went so far as to refer to the LHS student section as quote, “a large hostile crowd” in a Tweet.

In general, the overall feeling of being back in the bleachers, lighting a fire under the sports teams, has been enthralling for the students.

In Mudd’s words, “Being able to see the student section start screaming and start cheering just brings me a very genuine reaction and honestly just pure joy, because last year, you couldn’t cheer like that.”
In the Future…
Roberts noted that the student sections have become increasingly energetic throughout his years at high school, and he has high hopes for the future.

Once the winter season rolls around, the student section plans to go to the basketball games and wrestling matches. In the spring, lacrosse and baseball players should prepare for an exuberant crowd.

There have even been talks about creating an executive board with representatives from each class to promote school spirit and spread the word, in which the upperclassmen would impart their wisdom on the lowerclassmen before they leave.

The student section is a cornerstone in our school community, and it gives the school, regardless of individual background, interests, or grade, a reason to come together.

As Bonamarte puts it, “[The student section] is all there for one thing- to support Libertyville. It’s a unifying force…And when our seniors leave, we want that legacy to continue on.”