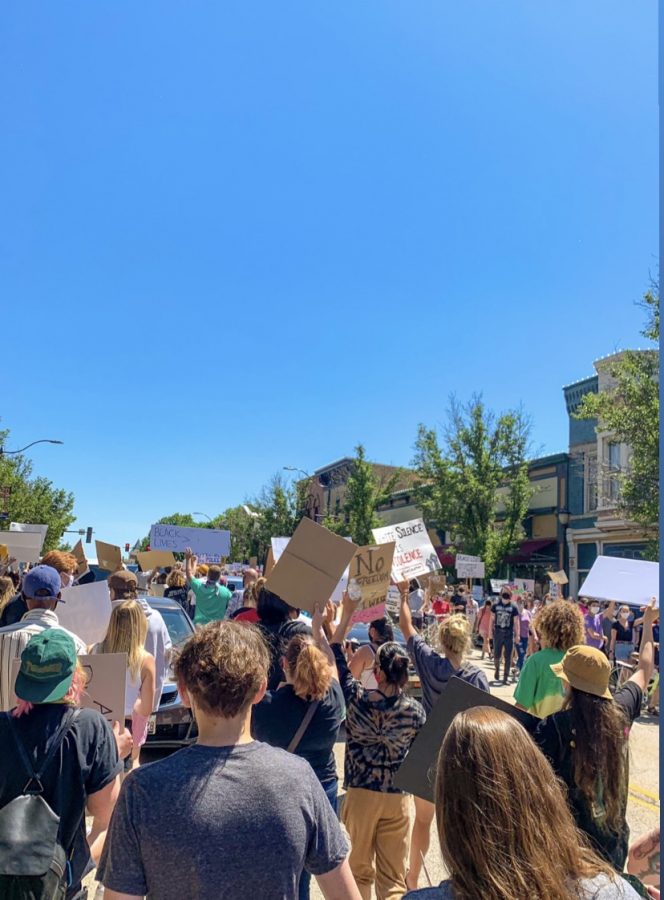 Systemic racial justice can only occur with a conjoined effort of individuals in our society. In the picture above, part of the effort towards racial equity occurred here in Libertyville, in June 2020.

May 25, 2020: a moment in United States history where hearts dropped and voices roared throughout the nation and across the globe.

I remember watching the video showing Officer Derek Chauvin kneeling on George Floyd’s neck for the first time: I was on the way to a job interview, scrolling through Twitter in the passenger seat with my mom next to me. And there it was. The almost nine-minute video where we, as a society, witnessed the murder of a Black man by a police officer in broad daylight.

I remember sitting there in shock and confusion. My stomach tightened, turning the video off three minutes in. I was uncomfortable and my heart was in pain. Those remain the only minutes I have watched, as I cannot bring myself to watch a human act so inhumanely towards another human, who was given no dignity, simply because he was a Black individual.

Floyd’s murder followed the prominent killings of two other Black individuals — Ahmaud Arbery and Breonna Taylor. Floyd’s murder, though, was the final straw — one that allowed the world to reflect on the value of human life and unnecessary force that was used solely because of the color of Floyd’s skin. The ability to reflect led to vulnerability across the nation, in which the Black lives matter movement was revived and justice was demanded.

I attended four protests during the summer of 2020, in which everyone there attended for one common reason: change. I witnessed our generation rise and unite to fight against racial inequity.

But first, we wanted accountability. So that change and justice can be a definite following.

And almost a year later, Chauvin, the officer charged with the killing of Floyd, was put on trial. While watching the prosecution team and their witnesses speak the truth, I found myself constantly uncomfortable, disgusted and angry. Every witness for the prosecution revealed another layer of cruelty and disgust that is rooted within specific individuals. Chauvin’s own police chief and members of the police department testified against him, breaking the “blue wall of silence” — the informal code of silence among police officers not to report on a colleague’s errors, misconducts or crimes.

The Chauvin trial also revealed the previously unseen interaction between Floyd and four police officers, including Chauvin, minutes before Chauvin held Floyd down with his face buried in the road. In this video, Floyd respectfully pleads with officers to not be put in their car because of his anxiety and recent coronavirus diagnosis.

Compassion was never shown from the start. Sympathy was never offered. Respect was not given. Because, to Chauvin, force and aggression were the answer.

“He knew better, but he didn’t do better,” said Steve Schleicher, a member of the prosecution team.

Chauvin knew a knee to the neck is unnecessary force, he knew police policies, he knew Floyd couldn’t breath, but he continued his act of brutality.

330 days later, judge Peter A. Cahill read off the verdict:

Derek Chauvin has finally been held accountable for his hateful killing.

I was laying on the floor, the news on my laptop on full volume, staring at my ceiling waiting for the verdict to be read. Phone in my hand, my friend and I were texting about the worst possible outcome that could have occurred: “The world is going to shambles,” I thought, if Chauvin was not convicted of all three crimes.

Reflecting back on this moment, I realize how expecting the worst possible outcome just shows how much work we have left to do. In retrospect, thinking that a police officer who killed another man in broad daylight wouldn’t face consequences is absurd. But that’s how our system has proven itself to be.

When the verdict was read, I remember the tears in my eyes, as with each time the judge said “guilty,” my vision blurred more and I breathed a sigh of relief. My immediate thoughts extended to the Floyd family; after a long and vigorous battle that followed the loss of a valuable individual in their life, their evident existence of immediate relief when Chauvin was charged as guilty on all three counts provided relief, after a wave of chaos and pain.

But is this justice? Has the justice the world and I have demanded been served?

No. This justice is incomplete and fragmentary.

Justice is not justice without full accountability. Justice isn’t complete without change and fulfilled promises. Accountability must occur for reflection and change to follow.

We keep fighting, we keep calling, we keep demanding. Change can occur; this trial just proved how slow and painful it might be. But every system and individual is subject to change.

How do we attain change?

We keep doing what we’re doing. We pause to celebrate the wins, we pause to reflect. It’s not easy. The fight for justice is long and draining, as it requires a crucial state of vulnerability to allow yourself to understand the depth of the pain we must end. We leap in the presence of fear because fear is a direct invitation to take a step of courage.

This is only the beginning. We’re just getting started. It’s imperative that we continue the momentum of the racial equity movement and not stop now. Let the verdict of the Chauvin trial fuel you; let it provide the Black lives matter movement with even more fuel.

Systemic racial equity is not in the hands of one person. It’s in all of our hands. And now it’s time for “never again” to become a reality.