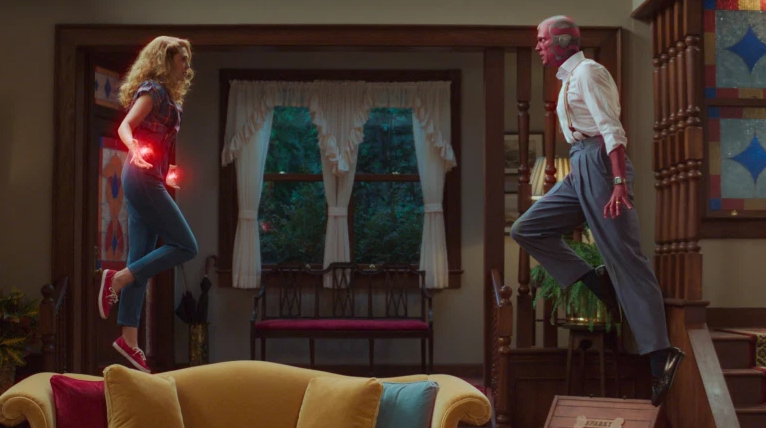 Elizabeth Olsen and Paul Bettany play the titular characters, Wanda and Vision, in “WandaVision.” The show explores their increasingly complex relationship through a sitcom-style lens, shedding light on the ways Wanda copes with her grief and loss.

Disney+’s first television series set in the fan-favorite Marvel Cinematic Universe, “WandaVision,” is downright wacky, and that’s what makes it work so well. The show is truly unlike any Marvel project that has come before it, using various sitcom styles to tell an emotionally-driven story about grief and loss. In doing so, Marvel’s first Disney+ series delivers a truly distinct Marvel experience while allowing its characters to remain the focus of the experience.

“WandaVision” follows two already well-established Marvel superheroes, Wanda Maximoff (Elizabeth Olsen) and Vision (Paul Bettany). Throughout the show, these two characters live in the eerie and pleasant town of Westview, New Jersey, presented to the viewer through various sitcom styles. However, it is apparent early in the series that something strange is occurring, as Vision was previously killed in “Avengers: Infinity War” and is still alive. These revelations and the implications of this plot point drive many of the themes of the story.

“WandaVision” is primarily about Wanda and Vision, and the show succeeds in making them two of the most compelling parts of the show. In previous Marvel media, Wanda and Vision have been criminally underutilized, primarily used as plot devices. “WandaVision” gives these characters new life, developing them into well-rounded individuals with complex emotions and a multi-dimensional relationship. Both Olsen and Bettany masterfully perform their respective roles, adding new layers to their characters.

Another one of the show’s star performances comes from Kathryn Hahn, who plays the nosy neighbor Agnus. Hahn’s performance is so completely over-the-top (which would come off as awkward in almost any other show) that she is a perfect fit for the sitcom-style of “WandaVision.”

Much of the intrigue of “WandaVision” draws from its bizarre premise. Each new episode of the show introduces a new sitcom style, progressively becoming more modern as the season continues. This format allows for a bountiful amount of colorful sets and incredibly detailed production design. Some emulations of past sitcom styles are impeccable, especially the earlier ‘50s, ‘60s, and ‘70s styles the show masterfully reflects in its settings and humor.

However, there are instances when the show does not benefit from the sitcom style. In the episode “Breaking the Fourth Wall,” characters speak to the camera in “talking-heads” a la “The Office” and “Modern Family.” These scenes did not work comically or from a storytelling perspective, feeling shoehorned in and awkward due to poor writing.

Like many modern television shows, “WandaVision” suffers from a variety of pacing problems. One common complaint with the show was that the episodes were too short, frequently ranging anywhere from 30 to 40 minutes. However, the pacing problems do not stem from having too short of episodes, but from having too many episodes. “WandaVision” could have easily told its story in six episodes instead of 9. There are many scenes throughout the show’s run that serve little to no purpose from a story perspective and add little to the characters, especially in the later episodes. The show never necessarily runs out of ideas; it is just blatantly obvious that the showrunners wanted to drag the show out to nine weeks instead of six.

At its core, “WandaVision” explores the lengths a person can go to while dealing with grief. This message is particularly complex for an MCU project but it pays off. The best moments of the show are the quiet ones, when Wanda speaks with various characters about the losses and traumas she has suffered. The vulnerability of Wanda’s character makes her the heart of the show and a new fan favorite. “WandaVision” could have easily been a punchy and smashy Marvel flick, like many MCU films, but it instead chooses to be an emotional journey, which makes it all the more satisfying and enjoyable to watch.