Quiet but not overlooked 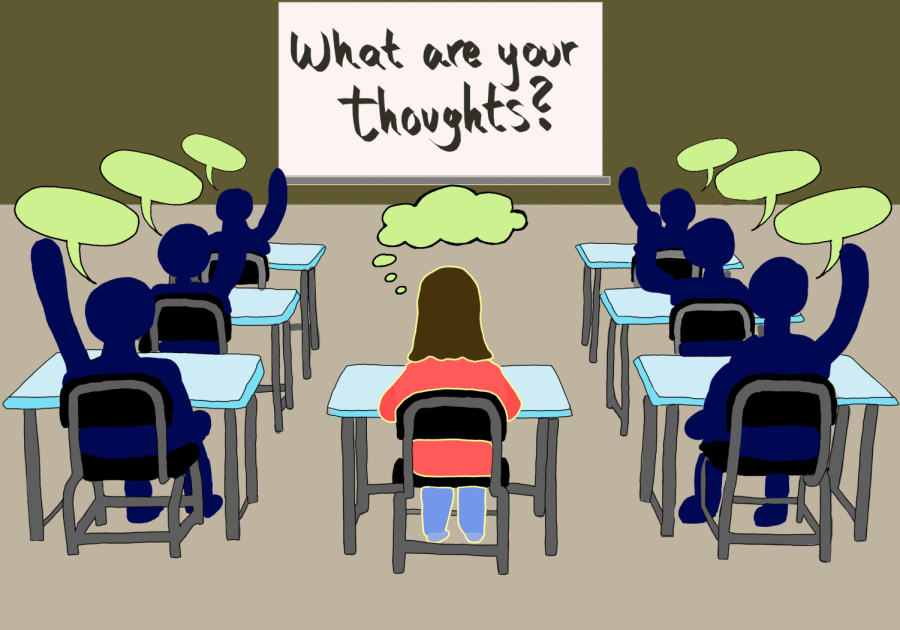 Every class contains quieter kids that contrast their more extroverted peers. These students are quiet for a number of reasons.

Every class contains so-called “quiet kids,” students who don’t frequently volunteer answers or speak up during class. There are a number of reasons why a student may be naturally quieter.

Matt Tooley, an English teacher, described his high school self as a quiet kid. He explained that a lack of confidence contributed to his quietness.

“When I was in eighth grade… we had 16 kids in my graduating class… and then I came to LHS where… we still had 650 kids in our class,” Mr. Tooley explained. “It made me very unsure of myself and pretty insecure.”

Emma Letscher, a senior who considers herself a quiet kid, echoed this sentiment: “Sometimes I just feel like my answer is wrong or there’s no real point in sharing it,” she explained. Both Letscher and Mr. Tooley mentioned that they volunteered answers more during English classes, when they felt more confident, and less in classes they were less confident in, like math classes.

For freshman Yubin Na, the class is less of a factor than the people around her. “I tend to be quiet mostly around people whom I am not close or comfortable with,” Na stated via email.

Margaret Nicholson, a chemistry teacher who also characterized her high school self as a quiet kid, offered another explanation. She rarely spoke up in class because she preferred to reflect on her thoughts before speaking.

Though there is a prevalent idea that teachers prefer students who speak more during class, the interviewed teachers insisted this isn’t accurate. “Every single person in my class is an asset to have in class because of their thoughts, questions, experiences, etc.” Mr. Tooley said.

Ms. Nicholson noted that every student has unique reasons for being quiet or loud. “As a teacher, it’s part of my job to know them and understand them and provide opportunities for them to express themselves,” she added.

But not every teacher makes these efforts. “I remember having a few teachers who would really look down on kids that didn’t participate,” Letscher said. In general, though, Letscher hasn’t felt a strong positive or negative stigma. Rather, she feels quiet kids tend to blend in.

Na’s experience has been different. She feels people have assumed that quiet kids have no friends because they are quiet. This idea is untrue; quiet kids have friends and speak comfortably with them, even if they tend to be quieter around people they don’t know as well.

This school year, where classes have been taught in both a virtual and hybrid setting, teachers and students alike have noticed that virtual classrooms are quieter than traditional classrooms.

Christophe Guiard, a French teacher who wasn’t a quiet kid in high school, believes this may be because it’s harder to forge connections in a virtual setting. This is his first year teaching roughly one-third of his French IV Honors students. Because classes were conducted via Zoom, “we didn’t have the opportunities to connect,” Monsieur Guiard explained.

On the other hand, virtual learning has worked better for some students. One parent told Mr. Tooley that their child is more comfortable learning at home. He theorizes that some students may thrive at home because in-school learning can have more distractions.

For some quiet students attending in-person classes in the hybrid model, the smaller class sizes have positively impacted them.

Letscher has found that it’s easier for her to share her thoughts during discussions in the hybrid model, when fewer students are in a classroom. “It almost becomes more of a small-group thing and less of a whole-class thing,” Letscher explained. As a larger proportion of students around her enter conversations, it becomes more natural for Letscher to join them too, she said.

Yet, Ms. Nicholson observed that students in her in-person classes are still quieter than in years past. She believes this may be because students are less familiar with each other. “They haven’t been in-person all year. They haven’t developed the same relationships that they would have in-person.”