Green Energy Continues to Expand Around the World 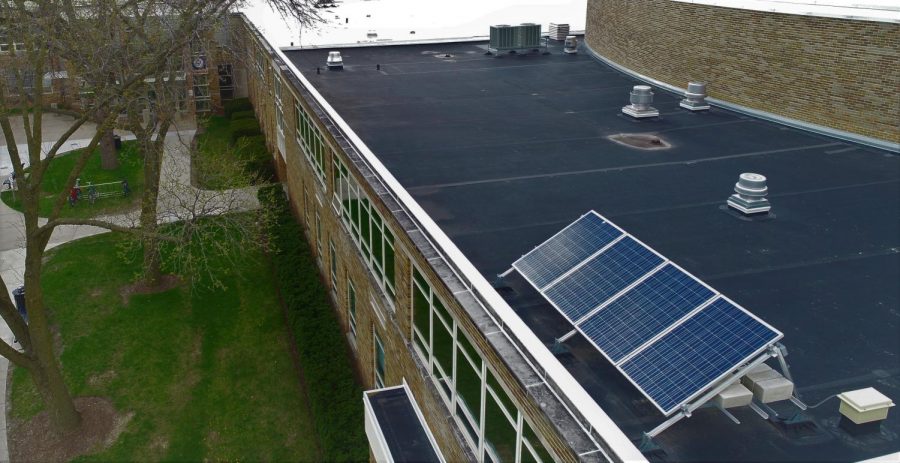 Libertyville High School has several solar panels installed on the northeast corner of the building, which were put in place seven years ago. These current panels do not generate a significant amount of electricity for the school.

One issue that continues to draw attention globally is the sources from which we derive our energy, both now and in the future. Oil, coal and natural gas are popular examples of some of the non-renewable energy sources that are being used today. However, both governments and everyday citizens around the world are looking at options with the potential to produce cleaner and more renewable energy. Wind turbines, solar panels and hydroelectric dams are only a few examples of the many technologies that continue to shape the future of green, clean energy around the world.

Since the Industrial Revolution, non-renewable energy sources, such as coal, oil and natural gas, have been the most commonly used energy supplies across the globe. Notable figures such as John D. Rockefeller, an influential oil tycoon, made vast profits off of these resources. However, this level of industrialization and fuel consumption came with some negative effects.

While oil is a source that regularly fuels our vehicles and provides heat to households, in the past 25 years, the United States has experienced more than two dozen oil spills. The largest accidental oil spill took place in the Gulf of Mexico on April 20, 2010, during which an oil drilling rig known as the Deepwater Horizon exploded and sank, spilling four million barrels of oil over the course of nearly three months. Oil spills in general are capable of killing plant and animal life, triggering air and water pollution, and disturbing salinity and pH levels in the ecosystem. In addition to the loss of resources, 11 workers lost their lives in the disaster, according to the Environmental Protection Agency.

Although oil is currently a valuable commodity, powering vehicles, providing electricity, and bringing plenty of jobs to create a healthy economic boost, the future might be powered by more green energy, derived from natural and replenishable sources, many of which are already being utilized by other countries around the world.

One such country is Iceland. Iceland used renewable natural resources to generate almost 100% of its energy in 2015, according to its government. On a global scale, this European nation is the world’s largest green energy producer per capita, as well as the largest electricity producer per capita, generating approximately 55,000 kWh per person per year. Early on in this shift, the country took advantage of its bountiful resources, and it is now powered primarily by geothermal and hydroelectric power. Accompanying this surge of green energy is a booming economy, with Iceland having an unemployment rate of approximately 2.8% and 15th place ranking in the richest countries in the world per capita, according to a 2017 article published by Fortune.

Another country with ambitious goals of green energy is the small nation of Costa Rica. In 2019, this Central American country achieved a milestone of 99% of its energy generated from renewable sources, according to The Borgen Project. The nation is home to six active volcanoes, as well as 61 dormant or extinct ones, and, subsequently, it generates much of its energy from geothermal power. However, Costa Rica utilizes other renewable sources of energy, primarily hydroelectric, as well as wind and solar power.

Many people and organizations have seen the value in green energy, and some have even been inspired to innovate new approaches to the challenge of creating renewable forms of electricity, coming up with their own ideas for ways to generate energy. One example is the company Pavegen, which was founded in 2009 by Laurence Kemball-Cook. Pavegen creates specially designed tiles that harvest the kinetic energy produced by a single footfall to create small amounts of electricity. The idea has since been experimented with in small quantities in major metropolitan areas, such as Hong Kong, London and Abu Dhabi. While this new energy is still in its early stages and is still a long way from powering an entire country — much less the globe — it may represent another step towards green energy, should the technology be further expanded upon, according to the company’s website.

Despite these examples of progress, however, green energy has still faced recent scrutiny. One such example occurred in Texas. In February, the state encountered a power crisis following severe winter weather. Immediately, the situation was believed by many to be related to its use of renewable energy, with frozen, powerless wind turbines cited as a cause.

However, in 2020, Newsweek reported that natural gas makes up the bulk of Texas’ electricity, at 46%. Ultimately, after February’s storm, it was discovered that the natural gas supply was significantly hampered, causing problems for local power generators, and, in general, contributing to the chaos. Texas Governor Greg Abbott claimed that the shutdown was the fault of solar and wind power shutdowns. However, the Texas Tribune later stated that all sources of power had failed, both renewable and non-renewable alike.

“Green energy, I would say, is already an important part of our energy mix in the United States,” said Dr. Jennifer Kahn, who teaches AP Environmental Science and Honors Earth Science at LHS. “In fact, we already see a lot of green energy coming onto our electrical grid in the last couple of years, like solar and wind power. I think that these are important technologies if we want to decrease our use of fossil fuels and reduce issues like global climate change.”

Green energy development is also happening at some level locally.

“When I’m driving around my neighborhood, I see a lot of people installing solar panels on their homes,” added Dr. Kahn. “When you get away from the big city, you see a lot of wind farms for generating electricity. I believe that more and more people are turning to these technologies for both economic and environmental reasons.”