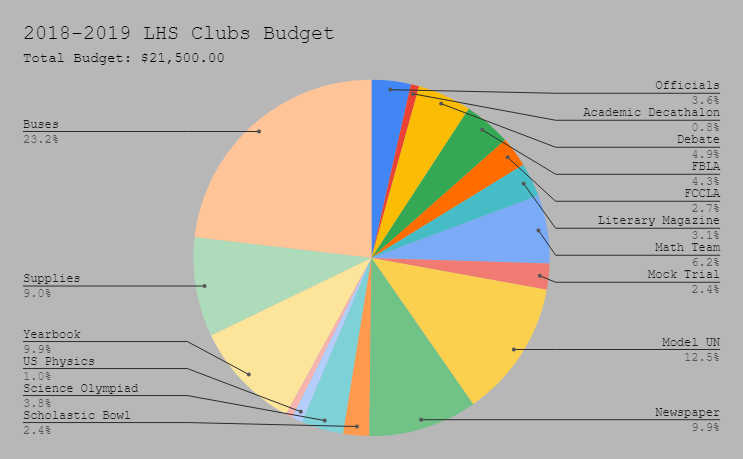 Through my time at Libertyville High School, I’ve participated in various academic clubs, like Debate Team, Science Olympiad, Scholastic Bowl and others. These clubs have become one of the main parts of my life and things that tend to encompass most of my thoughts throughout the day.

All of this time and all of our teams’ successes should be rewarded with more funding to help us go further and win more.

According to Jennifer Uliks, LHS’s student activities director, all extracurriculars that are sanctioned by the IHSA or are very connected with the school’s curriculum get funding from the school, which includes clubs like Debate and Scholastic Bowl.

Clubs that are neither IHSA-sanctioned nor deemed academic in nature, like Book Club, Latin Club, or Med Cats, need to procure funding on their own. Extracurriculars like these make up around 80% of clubs at LHS.

Every year, for the clubs that do receive funding, a new budget is made based on the funds remaining from the year before, Mrs. Uliks explained. If a club has lots of money left over from the previous year, they would likely be given less. If they needed more money than they had, more funds may be added to their budget the next year.

During the school year, if a club that already gets funding needs more funding, it can fill out a requisition form with a specific amount of money requested for a specific need. Mrs. Uliks is then responsible for approving it and, if approved, sending it onto the district level, where the form is either accepted or denied.

Every four years, athletes get new uniforms, but students who are part of clubs that require specific attire need to purchase it on their own. Model United Nations, Debate Team, Future Business Leaders of America, and more all require that participants wear Western business attire, including suits and ties for men and dresses and pantsuits for women, to compete. Western business attire is, in a way, the same as a jersey for a sports team, since it is the mandatory style of dress for competition. Not dressing for the occasion in these clubs can lead to fewer points being scored, a lesser chance of winning or even being kicked out from a tournament.

“We provide uniforms for sports. That is a precedent, right, so why not other groups?” said Mrs. Uliks. “We have to be really careful and mindful that the public [can] see all of our spending… If there’s a perception out there that it’s not being spent in the right way, taxpayers get really angry. [If we did this], the community would be confused as to why we were giving students $200 to spend…for clothes.”

According to the sports and club budget reports, provided respectively by John Woods, the athletic director, and Mrs. Uliks, last school year, football was originally allocated $15,954 while debate got $4,300. In past years, football has received even more money, peaking in the 2018-2019 school year at $31,156, one of the years football received new uniforms. That year, football’s budget was equal to that of seven separate subsidized clubs combined.

The average funding each sport received in the 2018-2019 school year was $5,227, while the average for each club was $4,088, meaning that in a regular year, on average, each subsidized club receives more than $1,000 less than each sport.

Now, I am not proposing sports be given less funding. But academic clubs should be treated equally and given equal recognition for our successes and more adequate amounts of funding to meet our needs.

Academic clubs greatly help students to gain valuable skills. During my time as a member of the Debate Team, I have worked with my peers to brainstorm ideas and help out my teammates in order to do well at tournaments. Teamwork is especially essential in one subsection of Debate, Public Forum, which involves debating side-by-side with a partner.

In clubs, many of the practical skills learned can be applied in the future. According to the American Debate League, debate helps students gain better communication and public speaking skills, which can be applied to almost any career.

Someone very dedicated to an academic club could get a college scholarship for their achievements. For people like me who don’t play sports, these clubs are a way to set ourselves apart from other applicants and boost our chances of getting into the colleges we want to go to.

The LHS Debate Team is divided into two subsections and Lincoln-Douglas doesn’t even have a coach experienced in this style of debating.  For the last two years, this responsibility has fallen on varsity debaters, who have been responsible for the education of novice and junior varsity members.

By the time a student gets to varsity, they do not have someone to teach them any more about their specific area of debate.

Academic clubs are just as strenuous as sports, just in different ways. We spend hours researching and preparing for Science Olympiad tournaments. On the morning of invitationals, we have to wake up at 5:30 at the latest to get to school and get on a bus, to spend the day taking tests we’ve spent months studying for. The night before, we’re often up until one or two in the morning, reviewing our resources or putting the finishing touches on the machines we’ve made.

If that isn’t considered difficult, I don’t know what is.

Even without much funding, LHS academic clubs are very successful. In the 2019-2020 season, the math team won the state championship for the third time in a row. The academic decathlon team placed ninth in state last year and fourth in the 2014-2015 season.

If academic clubs are able to do so well without many funds, there are endless possibilities with more funding. Clubs could go to more tournaments and place in state more often. All of this would bring prestige to LHS, making members of academic clubs just as lauded as student-athletes for their skills and awards.

Every single day, I — along with other students at LHS — work hard at the clubs we’re in, and consistently practice and give our best effort. All this work should pay off in the form of being given the most basic of tools to succeed, much of which would come with getting the funding we deserve.