The dangers of cultural misrepresentation in media 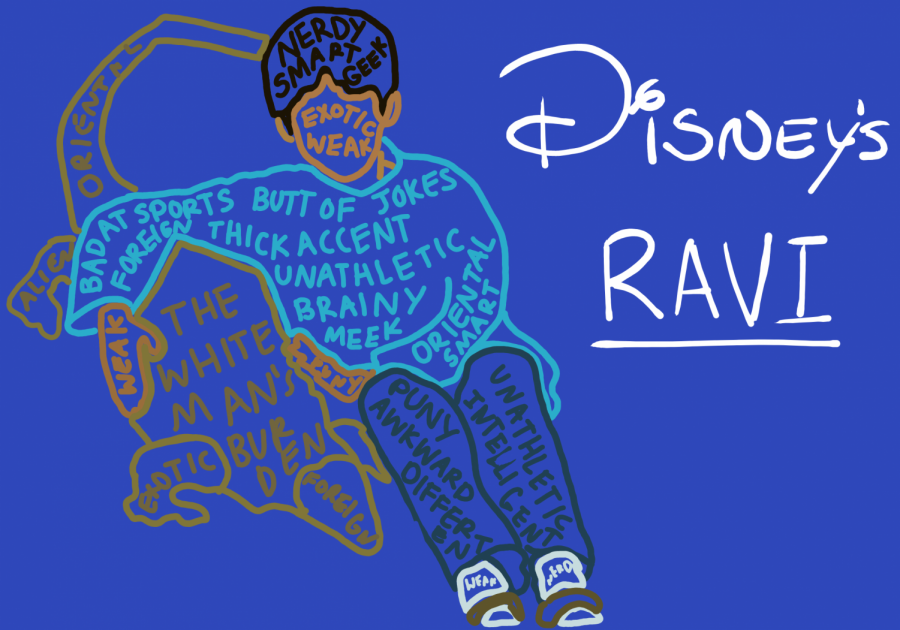 Ravi, from the Disney show “Jessie,” is a prime example of misrepresentation in children’s media. He is an inaccurate portrayal of South Asian culture, perpetuating the racist stereotypes of being nerdy, unathletic, and weak.

As a child, the Disney Channel was my oasis for fun, heartwarming shows about kids living odd but extraordinary lives. I adored shows like “The Suite Life on Deck” and “Jessie,” whose concepts and blank humor brought me so much joy as a child. When Disney+ was launched less than two years ago, I was ecstatic to show these two programs I once loved to my kindergarten-age brother. However, as I rewatched these shows, I became more aware of glaring flaws in these programs, specifically in their representations of different cultures.

In “The Suite Life on Deck,” the kids of the show travel the world on a cruise ship and explore the different cultures of the world. This is a fantastic concept, but the show completely fails in its execution. Instead of providing an authentic interpretation of the many cultures of the world, “The Suite Life on Deck” instead plays off of stereotypes in order to garner a cheap laugh from its audience. The episode “When in Rome…” sees the show’s main characters have to deal with an Italian con-artist family. Meanwhile, in “The Mommy and the Swami,” Zack and Cody visit a yoga guru on a mountaintop in India, only to discover that the guru is actually the leader of a telemarketing scheme. In “Trouble in Tokyo,” the main characters taste a fictional shrimp-flavored Japanese soda that quickly becomes a source of disgust.

Satire has its place in television, but “The Suite Life on Deck” is not satire in any way. Its attempts to paint a picture of our multicultural world fail and instead imprint an inaccurate worldview in the minds of children such as my youngest brother.

While “Jessie” does a better job of exploring different cultures, it has one glaring culmination of misrepresentation: the Indian member of the Ross family, Ravi. Throughout film and television, Indian people are frequently portrayed as puny, nerdy and weak, and they almost always have a thick accent. However, the one defining characteristic of these Indian characters is almost always that they are smart. Ravi in “Jessie” portrays all of these traits to a T.

Ravi is consistently the butt of jokes throughout the entire “Jessie” series. He’s made fun of for being unathletic and poor at sports. He’s bullied by classmates for his nerdy nature. Finally, the show plays off of foreign tropes to portray Ravi in an exotic fashion. For example, throughout the entirety of the show, Ravi has a pet Monitor Lizard named Mrs. Kipling, which he brought to New York from India. Not only is the Monitor Lizard most often found in Southeast Asia, but the name Mrs. Kipling is also supposed to be derivative of Rudyard Kipling, the author of the infamous poem “The White Man’s Burden.”

As an Indian-American person, the dangers of media misrepresentation of my culture, and of all others, is greatly disturbing. Unfortunately, inaccurate media portrayals of other people who look like me cause others to make false judgments about who I am as a person. There have even been instances when I have been called “Ravi” as a joke by others who use it in a demeaning manner. These occurrences drive home the reality that there are some who will associate me with the stereotypes tied to Ravi.

The gravity of the issues of stereotyping and misrepresentation is immense, and requires a multitude of solutions that I cannot possibly cover in their entirety in this piece. However, each of the solutions to solving this issue requires the cooperation of companies and corporations that have previously produced harmful content. It is crucial that these companies learn from their mistakes and actively work to not replicate them.

The various cultures of the earth are a beautiful expression of the best aspects of humanity. Racist portrayals of other cultures in programs directed towards children are dangerous. It is critical that we recognize that these problems exist throughout all media and understand these issues harm those with the most innocent minds.