Football beats Stevenson for first time since 2015 in a blowout 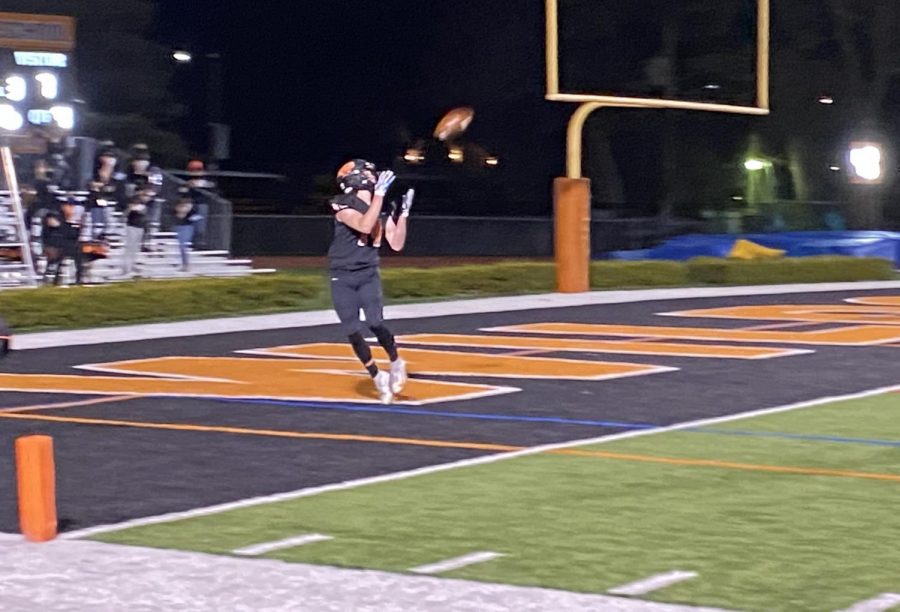 On Friday, April 9, Libertyville’s varsity football team took down Stevenson, 40-22, to improve to 3-1 on the season. It was the Wildcats first win against the Patriots since 2015.

Before the game, senior wide receiver Grant Friel said that the plan to exploit Stevenson’s defense was to “get the run game going.” That aspect of the game was a success, as LHS dominated running the ball all night, rushing for 369 yards as a team.

The ground attack was led by senior running back Matt Brenner, who accounted for 181 yards and 3 touchdowns, and junior running back Tommy Latka, who rushed for 138 yards and 1 touchdown. The offensive line handled the Stevenson defensive line to help create the holes for Brenner and Latka to run through. A highlight of the game came in the first quarter, when Brenner got a handoff to the left end, put a spin move on a defender and exploded up the sideline for an 81-yard touchdown.

“I thought I was tackled and next thing I know, I was still up. My linemen took care of the defenders, so I took it to the house,” Brenner said.

Head Coach Mike Jones added: “Matt is an explosive player and to get those kinda plays to change momentum is huge.”

Brenner’s touchdown put the Wildcats up 12-0 and acted as an electrifying moment for the whole team. Junior wide receiver Trent Adams said he was “screaming and yelling down the sideline” while watching his teammate sprint into the end zone.

Not to be lost amidst the electric offensive plays was the dominance of the defense. Junior defensive back Dylan Holmes said before the game that “at practice [the defense] has been really focusing on communication and tackling.”

Those things were not a problem on Friday night for the Wildcats. The defensive front seven was swarming Stevenson ball carriers all night. Senior linebackers Trace Batseky and Will McDonnell stifled the Patriots run game in the first half. Juniors Sam Pinsel and Jack Nevins were ferocious on the defensive line, giving the opposing quarterback no time to throw. The defense didn’t allow a first down until 8 minutes into the game.

“We were much more consistent around the ball this week than last week and that’s kind of our emphasis going forward,” Coach Jones said. “It’s not a matter of focusing on Stevenson or Lake Forest. We’ve got to work on ourselves, and that’s what our whole goal was all week long.”

Stevenson had some momentum before the half. They were at midfield with about a minute to play and seemed to have the defense on the ropes. However, in two consecutive plays, Nevins tackled the running back behind the line of scrimmage, and sacked the quarterback on 3rd down to force a punt and secure the 13-point halftime lead.

“The basic rule of being an inside linebacker is when you see the guards pull, you’ve got to scrape down towards where the ball is going,” Nevins said about his big sack. “I just filled the gap, saw the quarterback rolling out, and took him down. I feel like this is the best I’ve performed in a while. I was out with an injury sophomore year. I gotta tell you, it feels really good.”

Junior defensive lineman Diego Portillo commented on his teammate’s big game, saying that “Nevins played a huge role. He looked like Ray Lewis out there.”

The biggest sequence of the game came late in the 3rd quarter. Libertyville led 20-7 and had the ball deep in their own territory when, once again, Brenner exploded to the left end and raced down the sideline for another 80-yard touchdown to extend the lead to 26-7.

The following drive saw Stevenson work their way into the red zone. On 1st and goal, junior linebacker Joe Freedman pressured the Stevenson quarterback, leading to his pass being intercepted by senior cornerback Domenic Tarello.

On the very next play, Latka dashed up the middle for 54 yards. The offensive line kept up their dominating performance with a pancake block from sophomore Trenton VanBoening. A few plays after that, senior quarterback Blake Ellingson threw a beautiful pass to wide open junior wide receiver Connor Dickson in the end zone. Just like that it was LHS 33, Stevenson 7.

Junior offensive lineman Lucas Bruckner saw the night as a successful one for him and the guys up front. “I think we hit who we had to hit at the right time. Got a couple pancakes in it too,” he said.

Like everything this year, high school football has looked different amidst the Covid-19 pandemic. The biggest change is the fact that football is happening in the spring. A normal football season goes from August to November. This season runs from early March to late April. Brenner said this change has been difficult because “we usually get a couple of weeks of practice before the season. This year, we had to get right into it.”

Another change is that the team has to wear “wear masks under our helmets,” according to Friel. “And on the sideline, we’re spread out a lot more. We’re not allowed to clump up.”

A third big difference is the schedule. Holmes said the season usually entails “nine games and then playoffs.” This year, that schedule has been reduced to six games and no postseason.