The reality of cheating in virtual classes 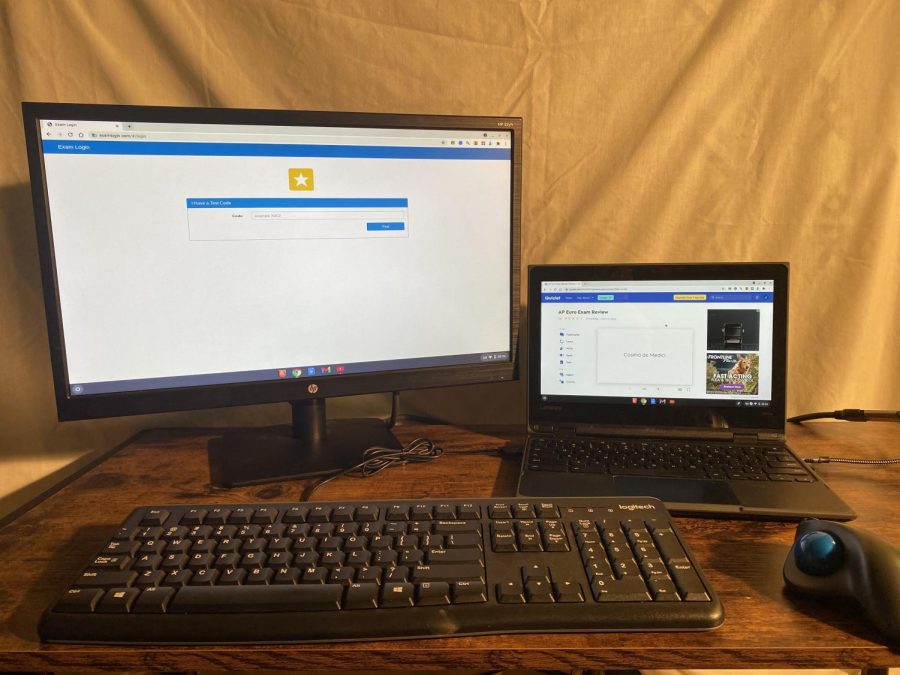 Remote learning has given some students more freedom towards their choice of computer and workspace setup. Many students now use personal computers with additional monitors, which allows them to look at multiple screens at any given time, including during assessments.

As schools across the country shifted to virtual learning in the early months of the Covid-19 pandemic, students gained unprecedented access to online resources and test answers. Now, after almost a full year of online learning, teachers have experimented with different testing systems in the hopes of limiting academic dishonesty. However, with remote learning, the temptation to cheat for some is higher than ever before.

Virtual learning has rapidly increased profits for businesses that sell test and homework answers to students, such as Chegg.

Chegg is a site where students pay a monthly subscription fee to upload test questions, and within two hours, a tutor will answer them. The company boasts a database of 46 million textbook and exam answers.

According to The Washington Post, “[Chegg] reported $153 million in revenue for the second quarter, when the pandemic shutdowns were at their peak — a 63 percent year-over-year increase.”

Cheating is not only a national problem; it also occurs at LHS.

Tim Roegner is the math department supervisor and also teaches precalculus. Last semester, he discovered that some of his students were cheating on a trigonometric identities test.

“When I was grading it, several students were using an identity they had not even learned yet, so it was pretty apparent that there was some outside source,” Mr. Roegner said. He then went online and found an app that solved it the exact same way as his students had.

Initially, Mr. Roegner said he was angry, but he then realized that it would be a great learning opportunity for his students in order for them to own up to their mistakes.

“I gave them the opportunity to just confess…their grade would exempt the whole assignment if they would own up to it and admit their mistakes,” he said. “Their integrity and character are more important than anything a math grade could ever give.”

If the students who cheated didn’t confess in Mr. Roegner’s class, he said he would have to give them a failing grade, call their parents and let the LSTs know. Fifteen students confessed to cheating, but there were many more who Mr. Roegner didn’t have evidence against who also revealed that they cheated; in total, 80% of his class admitted to using an outside source.

“Unfortunately, a couple kids didn’t own up to it right away…hopefully they learned their lesson [that] it’s better to just own up to your mistakes, rather than trying to cover it,” he said.

A male student who is a senior, who is not in Mr. Roegner’s class, said he felt like cheating among students has increased due to a lack of motivation and because of the accessible nature of answers being shared between people online.

“It’s already so easy to get distracted [in remote learning], and I feel like a lot of people don’t want to put in the effort and are burned out, so they find it easier to cheat because it’s so easy,” explained the student, who was granted anonymity in order to talk honestly about the sensitive topic.

Another male student who is a senior said that his cheating has increased drastically throughout remote learning because at home, students aren’t as accountable because [teachers] can’t see students as well.

“I also feel like everyone is [cheating], so I feel like it’s unfair if I can’t do it myself,” he explained. This source was also granted anonymity for the same reasons mentioned above.

Dr. Kreutz is a human anatomy and physiology teacher. Since the beginning of his teaching career, he has tested his students with non-traditional exam methods. For example, instead of using standard multiple choice questions, Dr. Kreutz administers verbal tests.

“When it comes to tests, we have taught kids how to memorize information, and some kids are great at memorizing; [however], you’re missing a whole group of students that are very smart, just not at memorizing,” said Dr. Kreutz.

Before the pandemic, in Dr. Kreutz’s anatomy class, he and a student would sit across from one another, and the student would have to make a Play-Doh model shaped into a specific body part and then point to the different bodily structures it had.

“The process of hands-on building is something that they understand and so they’re taking knowledge and putting it into application,” explained Dr. Kreutz.

However, with the rise of online and hybrid school, Dr. Kreutz had to alter his exam structure to fit the new learning models. Now, instead of a 3D model, students have to draw and color a picture of a bodily structure, point to it and verbally say the answer to him.

There have been no reported incidents of academic dishonesty in Dr. Kreutz’s class. During tests, students on Zoom and in-person are only allowed to look at Dr. Kreutz and their drawing. Additionally, homework is assigned on a secure browser, randomizing the question order.

John Taylor is a math teacher who teaches Algebra II. He and five other teachers run the LED (Learn, Explore and Develop) center at LHS, which assists teachers who want classroom-specific support from a technological standpoint or help with their instructional practices.

The hybrid learning model has caused a large increase in teacher support, and because teachers have gained more experience with digital platforms, the LED coaches have been able to meet with teachers one-on-one.

One of the main questions Mr. Taylor is asked by teachers is how to prevent cheating in an online environment.

Although there is no way to ensure a fully secure digital exam, Mr. Taylor believes that assessing students by asking them to create something, not just recall information, is the best learning method. He said his assessments are mostly open-ended questions where students have to supply the problem so that he can see if his students actually know the content.

He and the math department use MathXL to administer tests and assignments because it gives each student a similar problem but with different numbers. Another tool they use is Class Kick, which enables teachers to view their students solving a problem live.

Additionally, Mr. Taylor tries to hold his students accountable by having them sign an academic integrity contract stating that all of the student’s work is their own.

“Studies have shown that when you require students to fill something out, they will follow through with it,” said Mr. Taylor. “They will feel like [taking a test] is a commitment that they’re making, and they will adhere to it.”

While academic honesty is not guaranteed in an online setting, Mr. Roegner believes that students should focus on having academic integrity.

“Kids are more focused on their grades than the actual learning itself, so this is a great time for them to refocus on their priorities,” explained Mr. Roegner. “[Although cheating] is easy, you shouldn’t do it because it’s wrong and now’s the time to really reflect if you want to be known as someone who cheated through that course.”