MainStreet Businesses Take Recycling Into Their Own Hands 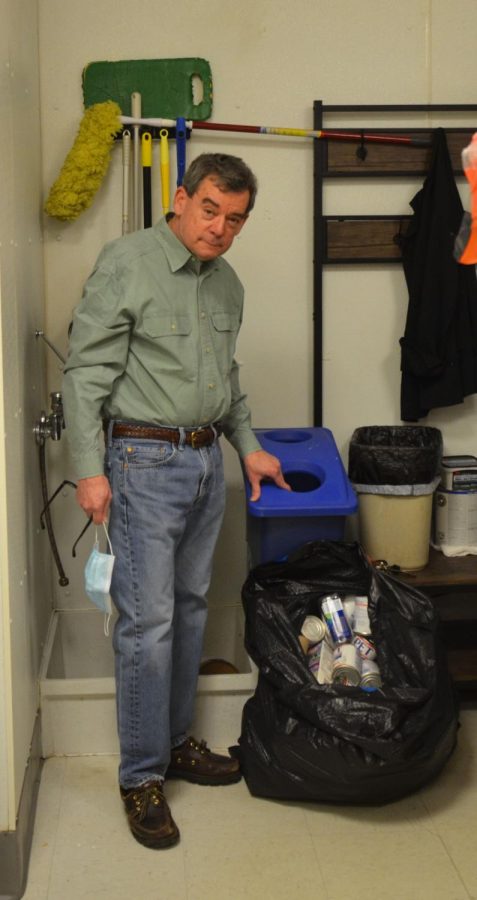 The owner of Rocky Mountain Chocolate Factory, Tom Lockowitz, pays to recycle cardboard and paid for a dumpster in the parking lot behind his store himself. Lockowitz also collects other recyclables in the back of the shop and brings them home to recycle properly.

In downtown Libertyville, whether or not a business recycles is up to the building owner, either the business owner or a separate landlord. For those properties managed by a landlord, the landlord has the final say in the decision to recycle or not, Village Administrator Kelly Amidei explained over email.

There is currently no Village of Libertyville employee responsible for overseeing recycling or other environmental issues, Amidei said. This leaves much of the waste disposal process up to the discretion of individual businesses and their landlords.

The village has a commercial recycling contract with Groot Industries, which gives MainStreet businesses the option to recycle a limited amount of waste for free. Once that limit has been reached, businesses can continue to recycle at a reduced rate. Despite this, some businesses downtown do not participate in recycling. Amidei credits this mainly to a lack of space for an additional dumpster on a building’s property.

Hansa Coffee co-owner Kevin Kane echoed this, stating that his business doesn’t have space for a second dumpster behind their building. He said that they tried to implement a recycling program in the past but quickly found that much of what should have been recycled just ended up in the trash, making the cost of recycling not worth the gain.

Not only is a business or building owner required to spend additional money on a dumpster to dispose of recycling products, but there’s an additional expectation that employees be paid more for handling this extra step in the waste disposal process, Kane explained.

“What it comes down to is, is the benefit worth the cost?” Kane said. He and his co-owner Tom Maegdlin have come to the conclusion that, in their situation, it is not.

Kane also noted that much of the waste produced at Hansa cannot be recycled anyway, so the extra hassle of setting up a recycling system would not have a significant overall impact.

Pizzeria DeVille owner John Durning shared a similar belief, saying that since his restaurant is not currently open for dine-in eating, they are not producing much recyclable waste. The vast majority of cardboard that comes from deliveries does get recycled thanks to the village’s contract with Groot, so there’s not many recyclables that end up in the garbage, according to Durning.

Before the pandemic struck, Pizzeria DeVville was working with the village to set up a composting and recycling program. This, however, was put on hold as they weren’t prepared to invest in a new dumpster enclosure while navigating the challenges posed by the pandemic. Durning said he feels that it would be beneficial for the village to take the lead on proper waste disposal.

“If the village were able to identify a central waste, recycle and compost area in the large back parking lot behind us, it would help move this initiative along for all of [the businesses with this shared parking lot],” Durning said via email.

Murphy’s Health Foods & Juice Bar shares a dumpster with Pizzeria DeVille. Sales associate and juice bar attendant Philip Roach noted that much of their inventory is delivered in cardboard boxes, so all of that cardboard, along with plastic, paper or glass waste goes in the dumpster. Additionally, the cups and straws used at the juice bar are biodegradable, Roach explained. This means that even if they aren’t disposed of correctly, they will go into the landfill and break down there.

“Economically, it’s cheaper to throw everything in the dumpster. And I’ve worked at companies where that was the practice,” Roach said. He shared that he’s glad that Murphy’s takes on this additional cost to care for the environment.

Owner of Rocky Mountain Chocolate Factory Tom Lockowitz has taken recycling into his own hands. Lockowitz pays out-of-pocket to recycle cardboard. He paid to install a dumpster in the parking lot behind his store, which he keeps unlocked to allow anyone who needs it to use it.

For other recyclables, like plastic, Lockowitz collects them in the back of the shop and brings them to his own house to dispose of correctly.

As Lockowitz sees it, businesses shouldn’t wait for village guidance to start recycling. It’s a responsibility businesses should take into their own hands, he shared. He acknowledged that recycling is a practice everyone should participate in and if a business or building owner waits for direction, no change will ever be made.

Dan Temesy and his wife, Maria Mandarino, owners of Green Room and Birdy’s Coffee House, also view recycling as an important part of their businesses. Temesy and Mandarino pay out-of-pocket to ensure that waste from their two restaurants is disposed of correctly.

Temesy shared that, in addition to recycling, their businesses also participate in what he called “food recycling,” or composting. Any food scraps or other biodegradable waste is sorted into bags separate from recycling and garbage products. Both Green Room and Birdy’s pay an additional fee — which Temesy estimated is about $40 per month — to have a service pick up this compost and dispose of it correctly.

“You have to implement and train your staff to [recycle] because everybody’s just so used to, as I call it, being lazy,” Temesy said. The staff is “getting used to not just throwing [waste] in the garbage but [thinking about] ‘what am I exactly throwing away?’”

The responsibility Temesy feels to recycle and compost stems from his Canadian background. There, everyone must recycle or they’re fined. It’s also required to separate recycling based on the material the item is made out of.

Temesy emphasized that he understands that his impact is small, but it’s a step in the right direction. He also feels a responsibility to train his young staff to continue these practices in their lives outside of work.

“I know we’re not gonna flip to electric cars tomorrow, but there is a need for the change,” Temesy said. “It’s going to be up to the youth 20 years from now.”