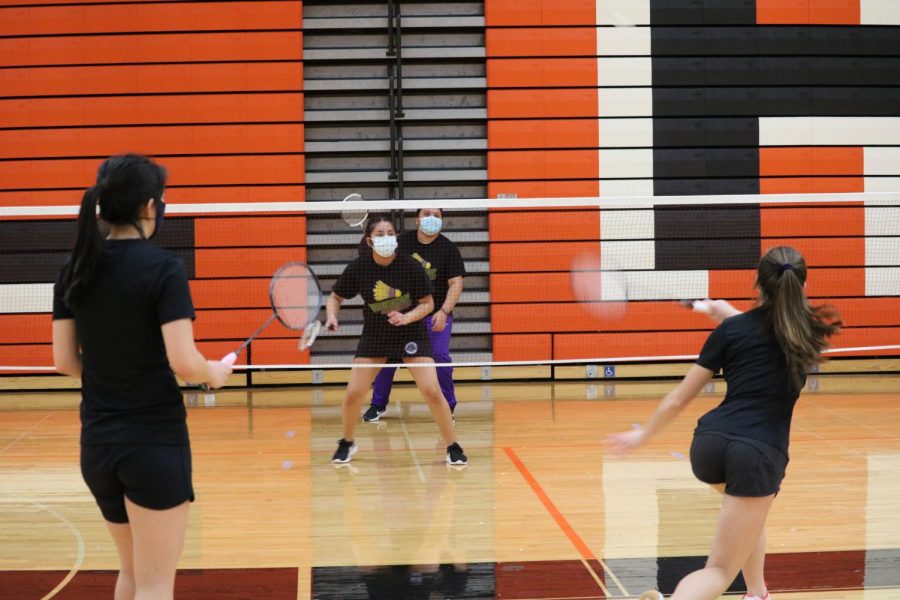 Alexandra Berns smashes the birdie across the net while her doubles partner Kathleen Jin stands ready for the return.

On Tuesday, Feb. 16, the varsity badminton team decisively beat Waukegan by a score of 18-0, improving their record to 3-1 on the season.

The 18 combined points in a badminton match come from 12 matches of singles and six matches of doubles. Within each match, opponents play games to 21 points in a best two-of-three series.

“I feel very proud of the girls. They competed great, they always bring 100%,” Coach Judi Neuberger commented after her team’s big win.

Senior Akina Gunawan said before her match that she wanted to focus on “hitting cross court shots, having good footwork, and communicating in doubles.” Gunawan and her doubles partner, Belinda Li, won their games 21-15 and 21-11.

“We were calling front, back, side to side, and it saved us a lot of points. The second game went better because we communicated more,” Gunawan said afterwards.

In other games, Quinn Murphy and Amber Semler used drop shots to get out to an early lead in doubles, and they finished with 21-9 and 21-7 victories. In singles, Alexandra Berns outmatched her opponent, 21-7 and 21-12. Berns commented after her win that her go-to shot is the “smash.”

The JV 2 team, composed mostly of freshmen, was also in action and won their match, 16-2. Not only did they cruise past Waukegan, but they also beat Stevenson earlier this season. Coach Neuberger said that is something no LHS badminton team had ever done before.

Like everything, badminton has changed with the COVID-19 pandemic. All athletes and coaches must be masked up for the entirety of the meet.

“This is my fourth year playing badminton and it’s a lot different with the masks this year,” Cervantes said. “I lose my focus and sometimes when I serve, I can’t really see.”

There are also limitations on capacity in place for safety reasons to enforce social distancing. “During the meets, we can only have a certain number of people in the gym, so we have to wait in [the cafeteria] instead of watching the match,” Gunawan added.

These restrictions also mean that no spectators are allowed to be in attendance. This policy is for all winter sports, not just badminton, and because of this, LHS has set up a YouTube channel for spectators to be able to watch from home.

Another different aspect this season is coaching. “I sometimes think everything else gets lost when I repeat myself too often with ‘six feet apart,’” Coach Neuberger said. “I went up to one girl during the match and said, ‘What do we always say?’ She [responded with], ‘Stay six feet apart.’ I’m like ‘No, it’s don’t hit it to the middle.’”

Looking ahead for the badminton team, the next match is at Zion-Benton on Thursday, Feb. 18. Coach Neuberger really hopes that there will be a “sectional and state series. It’s a low-risk sport, and I feel like there’s a way to do it. I’ve got eight seniors who’ve been playing with me for four years and they didn’t get a chance last season.”