The Tree, The Cobra, and The Eagle: Cobra Kai season 3 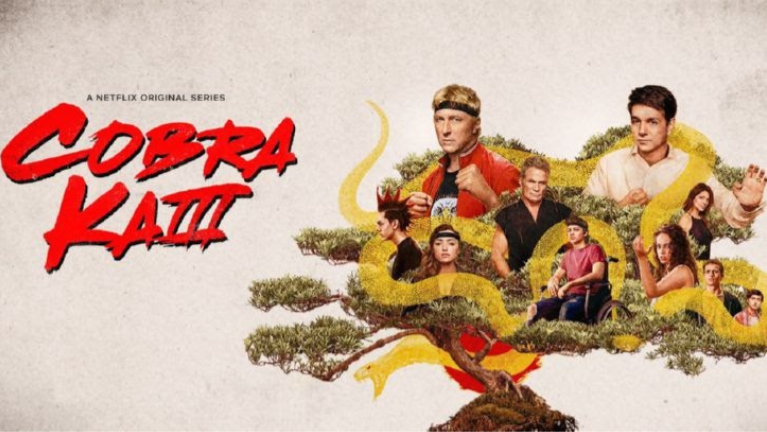 Out of all the shows I’ve watched and been a fan of, “Cobra Kai” on Netflix has the most twists, and the newest season, its third, was no exception. The show’s writers give the season a continued vibrancy by expanding on clever imagery and leaning on character development.

A majority of the third season revolves around former Cobra Kai turned Eagle Fang Karate student Miguel Diaz following his discharge from the hospital after being in a coma at the end of season two. Johnny Lawrence starts a new dojo, after leaving Cobra Kai because of John Kreese’s actions. Sam deals with trauma involving the rumble that happened at the high school. Cobra Kai student Hawk begins to question the teachings of the dojo. And the rivalry between Cobra Kai, Eagle Fang Karate (Johnny’s Dojo), and a reformed Miyagi-Do grows even stronger.

I liked the main redemption arc of this season, which concerned Hawk. Hawk’s well-written redemption arc sets season three apart from other shows. Despite the redemption arc being ignored for three of the season’s episodes, it was still given an intense build-up with an unexpected climax. In most shows, the viewers can anticipate the result of a redemption arc.  However, in “Cobra Kai,” the way the writers depicted the arc was slightly subtle, allowing the viewer to use a sense of imagination and feel some anticipatory enthusiasm. (A possible explanation: Instead of making Hawk question every single aspect of the dojo, they only really had him question Kreese.)

Today, most redemptions lack sufficient build-up to justify an emotional payoff. These redemption arcs tend to be severely hindered by poorly executed tone and dialogue.

In order for a character to be properly redeemed, they need to realize what’s going on around them, and it needs to be justified. For Hawk, those things happened, but in different ways than a viewer might expect.

In addition to the redemption arc, another thing that set this season apart was its use of imagery. The directors’ use of dream sequences in this season was incredibly clever, and at times, gave depth to the way the two characters who received these sequences — Miguel Diaz and Samantha LaRusso — viewed their lives. For instance, in the first episode, a karate match was used as a framing device for Miguel’s medical battle. If he won, he woke up from his coma. If he lost, he would have died.

These two moments also shed light on the relationships with individuals close to them. In Miguel’s dream, he won because Johnny told him to fight, giving him the strength to win and wake up. While Sam, on the other hand, was not so lucky, at least at first.

Throughout this season, she developed a form of trauma, causing her to feel alone.  Her dream sequence involved her attempts to defend herself against Cobra Kai student Tory Nichols but failing to do so, drowning in the process. In the sequence, there is no one to back her and nowhere for her to run. With the help of Daniel LaRusso and some powerful words, she gained the strength and confidence to fight back.

A major theme of “Cobra Kai” is how a relationship can impact a person. For example, a key relationship depicted this season was the one between Johnny and Daniel. Johnny and Daniel, who are the two most rigid characters in the series, grew up from childhood having a very strong rivalry. This rivalry, and various failed attempts to reconcile it, was a huge part of the series to this point. However, the return of Ali Mills, in episodes 9 and 10 this season, acted as a crossroads for their relationship.

The most important moment of change comes when Ali looks at both bull-headed characters and states that there are three sides to the story: there is Johnny’s side, Daniel’s side and the truth. This is an incredibly important moment in the season, as not only is this an important lesson for the viewers, but it also signals a changing point between Daniel and Johnny, who seem to finally put their childhood rivalry behind them.

The most important use of relationships throughout the season is how they are used to build Robby’s character. This was an incredibly rough season for Robby. After being arrested for kicking Miguel off a banister, everything went downhill for him. In prison, Robby feels like he has no one to turn to and seeks refuge in Kreese, who welcomes him openly. While it may seem like Kreese cares, all he was doing is grooming him into the Cobra Kai lifestyle and trying to use him as a pawn in an attempt to bring Johnny back.

Through this, the writers teach us that we will have people we can trust, but we also need to be careful about who we put in our inner circle. It’s easy to be seduced by a potentially violent way of thinking, but we can’t give in. This is probably the most important thing “Cobra Kai” teaches the viewer.

There are many reasons why I liked this season. If you haven’t yet watched it, I recommend you take the time. The build-up of the redemption arc, the use of symbolism, and the cause and effect that relationships can have on one’s journey, were all well-depicted by the director and make the season worth viewing.