Life after Trash Day: What Happens to our Waste after it is Thrown Away? 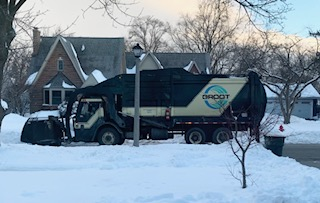 What actually happens when something is thrown away in the trash? It disappears forever, right? Not really. Many people know generally how the system works — something is thrown away and it goes into a trash can that is then rolled onto a curb on an appointed day. Then, the garbage collector comes and picks it up, and most never worry about it again, thinking it is gone forever. However, that is not the case. Those pieces of waste follow an extremely lengthy process before reaching their final destination.

At LHS, the recycling and trash pickup is similar to what happens at a home. Waste bins throughout the school are emptied by the custodial staff into a dumpster located outside the school, which is then picked up by Groot, the waste collection company for Libertyville and the surrounding area. The recycling program at LHS has been temporarily put to a halt due to the coronavirus, according to building and grounds supervisor Chris Stancil. It was decided by District 128 that LHS would not resume recycling until the pandemic was under control due to the amount of students and staff that handle recycled materials. So, currently everything is considered trash.

In Libertyville and its surrounding towns, most people choose to have both trash and recycling bins. However, across the country, the norms for recycling and trash are different. This is why only 34% of waste from the nation was recycled in 2018, according to a study from the U.S. Environmental Protection Agency. In the United States, the study reported that more than 292 million tons of waste was generated; 146 million tons of that garbage — half of it — ended up in a landfill. Of that, 94 million tons were recycled, with the remaining percent being handled with other means like biochemical processing.

The path waste follows from its initial disposal to its final destination is a long and grueling process, and the recycling process itself is complicated and costly. But recycling specifically helps to save the environment and keep landfills from overflowing. The process saves a lot of energy compared to mining more raw materials to create new products. For example, according to Waste Management, another garbage collection company, it takes the same amount of energy to create 20 recycled aluminum cans compared to one new can. Recycling also saves on oil. One ton of recycled plastic saves 16 barrels of oil, Waste Management says.
Recycling
Step 1:

After an individual distinguishes their recycling from their garbage, they place it in a designated recycling bin. Recycling was more difficult a little more than a decade ago before recycling centers were upgraded to sort materials automatically; this burden used to fall on the people recycling. One would have to sort their paper, plastic, aluminum and glass into separate bins. Thanks to new technology and upgraded recycling centers, this problem was resolved.

Once these materials are dropped off, they go through state-of-the-art sorting machines that are almost all automatic. The unsorted recycling left then travels down conveyor belts, passing through many sensors and other machines dedicated to sorting out types of recyclable materials like paper, cardboard, metal, aluminum, glass and plastic.

After the machines sort out all of the different types of materials, they are crushed down and sold. Third-party purchasers buy various blocks of recycled material, and they then clean and process them into something new.

The process that metal and aluminum go through is very similar. They get cleaned and all foreign objects are removed from the batch after it has been received from the recycling center. The clean aluminum chips are then inserted into a 730-degree Fahrenheit furnace, where they are melted down into 27-ton ingots, according to Discovery Channel. Then, those ingots can be sheeted down into very thin aluminum, making their way towards a new can.

After plastic has been sorted from other materials, it gets sorted again based on the type of plastic, called resin content. The sorted plastic gets chopped up, cleaned, and all labels are removed; however, this may be different based on what kind of plastic is being recycled, according to ThoughtCo. Plastic chunks are melted and then formed into tiny pellets called nurdles, which are then taken and turned into another product.

Glass is sorted again based on color: green, clear, and all other colors get mixed in with brown. These sorted glass materials get crushed down into very small pieces. Before this, the labels are removed with hot water, according to RecycleNow. Next, the small bits of glass are melted and then put into molds for new jars and bottles.

Trash in Libertyville is picked up the same way as recycling. All non-recyclable materials should be disposed of by bagging them and putting them in a garbage can. For larger buildings, dumpsters are the norm.

Garbage trucks, also deployed from Groot North in Round Lake Beach, pick up waste on one’s specific garbage pickup day. This waste then travels back to Groot North before being hauled on a larger vehicle on a 60-mile journey to the Winnebago Landfill in Rockford.

Waste at the landfill is dumped over mounds of years-old waste and then covered with dirt, a plastic shield and layers of clay, and this process continues until the landfill reaches capacity. Once this happens, the waste is covered with clay and another plastic shield. Rainwater that falls on the landfill runs through the layer of dirt and vegetation and over the protective plastic to collection pools. Landfills can be as tall as 150 feet.