Gender Inequality is Plaguing the Classroom 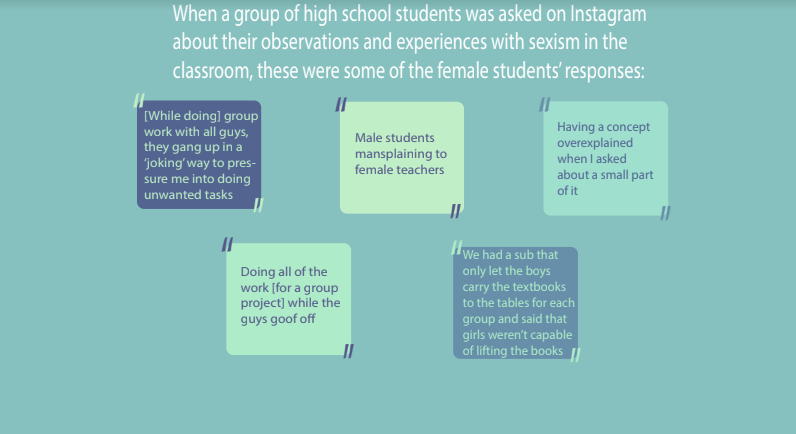 It’s not uncommon to hear our male classmates claim that gender inequality doesn’t exist and that women and men are treated the same. And wouldn’t it be nice if that was true?

Sexism might not exist in the same blatant fashion as it did in the past, but gender discrimation hasn’t gone away, and it’s something women deal with in our daily lives. Today, sexism is ingrained into every aspect of life, and it has become so normal that we often don’t recognize it. Unfortunately, sexism is especially prevalent in the classroom. We’ve personally been subject to this near-ubiquitous sexism, and we’ve also witnessed its effects on our female peers.

One recurring incident that has stuck with me is when I (Ella) was in my chemistry class sophomore year. I was the only girl in my lab group, and I never got to actually participate in the labs. My group always made me write down the data from the experiments. No matter what lab we were doing, one of the boys in the group always took the lead. I’d try to help, I’d try to take a more important role, but the boys in my group never listened to me. They probably didn’t even realize what they were doing, but it was so natural for them to take charge over a female that they just relegated me to a background role without a second thought.

Another issue that it seems like every girl has experienced is the classic repeat-my-answer-louder phenomenon. Ask any girl you know, and she’s probably had a classmate — likely a non-female one — take an answer that she’d shared quietly and claim it as their own. This is something we’re all familiar with, and something we all probably recognize as unfair, yet it continues to happen.

As an opinionated and outspoken person, I (Ellie) have been called bossy for almost all of my life. It used to make me feel good. Who doesn’t love being the boss? But as my male peers began to mature and contribute their own ideas to discussions, teachers and parents didn’t call them bossy like they did with me. They praised them as leaders. Then I began to understand the difference in labels that my male peers and I were receiving.

The difference in language used for females and males in the education system impacts how children perceive gender roles. Leaders make good bosses, but being bossy gets you a stern look to sit down and be quiet.

A 2003 study conducted by the University of South Florida found that during adolescence, girls often begin questioning their own judgement. It also found that girls are more likely to attribute their failures to internal factors while their male counterparts blame external factors. Girls also tended to be afraid to fail, which made them less inclined to take risks or enroll in STEM classes. The study reported that adolescent girls tend to lose their assertiveness and become more self-critical.

This timidness often carries over into the classroom, where girls may lack the confidence to raise their hand or participate during discussions.

Emily Eichmeier, a social worker at LHS, said she had been noticing that LHS is home to gender discrimination, and she wanted to find a way to give female students a support group made up of other women and girls at the school. Two years ago, she and other female faculty members started hosting Dare to Empower lunches, which gave female-identifying students a space to talk freely about sexism they’d encountered and discover ways to support themselves and their female classmates.

The prevalence of gender-related microaggressions are common knowledge for most female-identifying students at LHS, but some male students have also seemed to become more aware of the issue. Senior Kevin Joseph noted that he’s witnessed his female classmates fall victim to sexism in the classroom setting.

Joseph, who takes STEM classes like computer science, explained how he perceives his female classmates’ experiences: “When I’m leading a discussion, I don’t necessarily see [many] female participants, but I can’t blame them,” he remarked. “Being in a male-dominated class, especially computer science, would be intimidating.”

Additionally, he feels that the toxic male culture at LHS is contributing to the already prevalent issue of sexism in the classroom.

English teacher Ryan Ebling echoed this: “As I’ve been learning about sexism and misogyny in the last couple of years, I’ve noticed that it’s everywhere and that it’s something that we accept as just the way things are…and we act like nobody taught [men] to be that way or nobody continues to teach them to be that way.”
Joseph has heard his female peers referred to as a dishwasher or being told to go make a sandwich.

“It seems funny and insignificant when they say it, but at the end of the day, all of that piles up,” he explained. “I can’t imagine how I would feel being called stuff like that all the time.”

Mr. Ebling has found that as a man, his role in dismantling gender inequality is to listen to women when they tell him about their experiences with sexism. He shared that it’s a natural response to feel defensive when being called out on sexism, and that it’s something he’s made a conscious effort to fight.

It’s not your fault if you subconsciously perpetuate gender inequality. But it is your fault if a woman tells you that your actions are harmful and you choose not to change your behavior. And this goes for anyone, no matter their gender. If we are not open to feedback and if we don’t allow others to correct our wrong behaviors, we will never progress toward gender equality.

In order to create a society with women in powerful and successful jobs, we need to create an environment in the classroom in which all genders feel comfortable speaking their mind, and know that their thoughts and opinions are valued. Being raised to tolerate interruptions from a male in the classroom ingrains the idea in young women that being submissive to men is the only way to be successful.

As the president of Advocats, a club targeted on discussing and identifying gender inequality, senior Georgia Filler is committed to improving gender equality. One way she practices this in her daily life is by “promoting femininity because it’s shamed [by some people].”

Filler explained that the Advocats group loves to do activities such as making friendship bracelets, painting and other artistic activities that allow for creative expression during their meetings.

“Just because [these] activities are deemed inherently feminine doesn’t make them less important than sports or other activities like that,” Filler commented.

On an individual level, we can all start calling out sexism when we see it — you’re responsible for supporting those around you, no matter your gender. An act as simple as letting your male classmate know that the joke he made was in poor taste can begin to rewrite societal norms. It may help that person be more conscious of imperceivable sexism. It may encourage others to call out sexism in their daily lives.